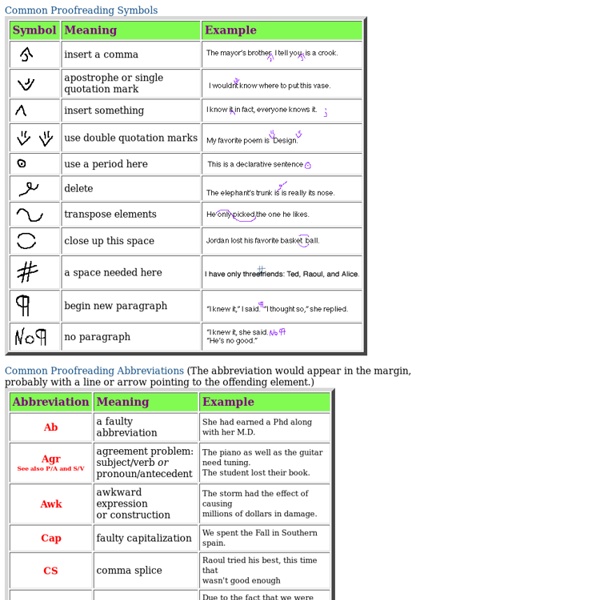 proofreading and editing tips General tips for proofing Read it out loud and also silently. Read it backwards to focus on the spelling of words. Read it upside down to focus on typology. Use a spell checker and grammar checker as a first screening, but don't depend on them. Have others read it. 12 Awesome Language Resources for the Word Nerd I’m an unabashed word nerd. I majored in English and have been a high school English teacher for almost 30 years. I run an online program helping homeschoolers develop writing skills, and I manage this wordy blog and a wordy Facebook page. I have become, over the years, something of an expert on grammar and usage, but it’s not due to any particular cleverness on my part. Here are a dozen of my favorite resources. I own three fat dictionaries, and on just about every word question, I consult all three. The first Webster’s Dictionary was published in 1928. The last unabridged dictionary published by Merriam-Webster is their rather controversial Third New International Dictionary of the English Language that was published in 1961. In the meantime, they keep revising their abridged but useful Collegiate Dictionary–now in it’s 11th iteration. The American-Heritage Dictionary is noticeably more conservative and prescriptive than the Merriam-Webster. The second edition was published in 1989.

13 Little-Known Punctuation Marks We Should Be Using Because sometimes periods, commas, colons, semi-colons, dashes, hyphens, apostrophes, question marks, exclamation points, quotation marks, brackets, parentheses, braces, and ellipses won't do. 1. Interrobang You probably already know the interrobang, thanks to its excellent moniker and increasing popularity. Though the combination exclamation point and question mark can be replaced by using one of each (You did what!? or You don't read mental_floss?!) 2. The backward question mark was proposed by Henry Denham in 1580 as an end to a rhetorical question, and was used until the early 1600s. 3. It looks a lot like the percontation point, but the irony mark's location is a bit different, as it is smaller, elevated, and precedes a statement to indicate its intent before it is read. 4. Among Bazin's proposed new punctuation was the love point, made of two question marks, one mirrored, that share a point. 5. 6. Need to say something with unwavering conviction? 7. 8. 9. 10. 11. 12 & 13.

English Grammar: a complete guide Do you have a question about the correct usage of the semicolon or how to place adverbs in a sentence? If so, you've come to the right place. Edufind.com is a complete English grammar guide filled with the rules of English usage. Each grammatical rule is explained in plain English with several examples, and when needed, counter-examples. The grammatical rules covered by this guide are categorized below. Nouns Nouns are people, places, or things, They tell us what we are talking about. Adjectives Adjectives modify, or describe, nouns. Adverbs Adverbs modify adjectives, verbs, or other adverbs. Determiners Articles, quantifiers, and other determiners modify nouns. Verbs & Verb Tenses Verbs are action words. Speech When we report what someone says, we can cite the person directly or indirectly. Punctuation Punctuation is not part of oral grammar, but it is essential to master in written English. Relative Clauses We use relative clauses in English to create more complex and more precise sentences.

Signs and symbols: the names of punctuation marks Chances are that you use them every day – from ‘ to # and ? to . – but where did common punctuation marks get their names? Ampersand The ampersand is the sign &, used to mean ‘and’. When reciting the alphabet, letters that were also entire words in and of themselves (such as a and I) could once be read as ‘a per se a’, ‘i per se I’, to make it clear that a word was intended, rather than a single letter. Apostrophe Use of the apostrophe (‘) can be a bit of a minefield (our handy hints will help you work them out), and you might experience an ironic wish to turn away from them. Incidentally, an apostrophe is also ‘an exclamatory passage in a speech or poem addressed to a person (typically one who is dead or absent) or thing (typically one that is personified)’. Hyphen The hyphen (-) is used to join words together, and so it is perhaps unsurprising that the word hyphen comes from the Greek for ‘together’ (hyphen). Colon Parenthesis Octothorp So, what of octothorp?

Punctuation The sentence and the full stop The full stop is the most important punctuation mark. It shows the end of the sentence. The English language also uses capital letters at the beginning of sentences. For example: The first schools in what is now British Columbia were established by the Hudson's Bay Company in about 1853 on Vancouver Island. Try this exercise: Exercise 1 The comma The comma is the most important punctuation mark after the full stop. 1. 2. 3. 4. 5. 1. Recently, the number of service enterprises in wealthier free-market economies has grown rapidly. Subsequently, the aircraft underwent numerous design changes before it was incorporated into the Type 4 jet aircraft. To visit his brother, he drove through the night. After dinner, he walked around the town. Although it might seem highly unlikely, there are considerable similarities between the male and female body. Similar feelings influenced middle-class shareholders and directors, too. 2. (and, but, or, so, nor, for, yet) 3. 4. 5. Colon

What Are the Fourteen Punctuation Marks in English Grammar? There are fourteen punctuation marks commonly used in English grammar. They are the period, question mark, exclamation point, comma, semicolon, colon, dash, hyphen, parentheses, brackets, braces, apostrophe, quotation marks, and ellipsis. Sentence Endings Three of the fourteen punctuation marks are appropriate for use as sentence endings. They are the period, question mark, and exclamation point. The period (.) is placed at the end of declarative sentences, statements thought to be complete and after many abbreviations. As a sentence ender: Jane and Jack went to the market. Use a question mark (?) When did Jane leave for the market? The exclamation point (!) Within dialogue: “Holy cow!” Comma, Semicolon and Colon The comma, semicolon and colon are often misused because they all can indicate a pause in a series. The comma is used to show a separation of ideas or elements within the structure of a sentence. Whether to add a final comma before the conjunction in a list is a matter of debate.