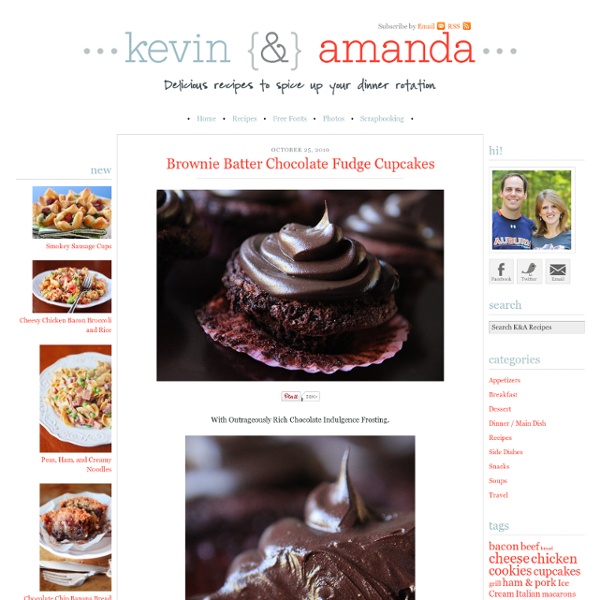 98K+Pin It With Outrageously Rich Chocolate Indulgence Frosting. AKA The Mega. Extreme. Chocolate. Overdose. Almost immediately after making the Chocolate Chip Cookie Dough Cupcakes, I got the idea for a rich, decadent massively chocolate brownie batter cupcake, and I haven’t been able to get them outta my head since! To all the chocolate lovers in the house… This is for you. It all starts with the brownie batter – this is seriously one of my favorite chocolate batter mixes ever. It only calls for 1/3 cup sweetened condensed milk though, and since I hate recipes that only call for a little bit of something in a can, leaving me wondering what the heck I’m supposed to do with the rest of it, go ahead and make this easy, no machine required homemade ice cream. Use your trusty 1.5 tbsp scoop to drop spoonfuls of brownie batter onto a parchment-lined baking sheet and freeze overnight. The next day, get ready to bake the best chocolate cupcakes ever. Mmm, chocolate chips. Here it is.

Nutella Chocolate Chip Cookies ***Last Friday night, Brad and I got an invite to an impromptu dinner party...What fun! We were both excited, and of course, I immediately started to think about what I could take along for dessert. I was in the mood for cookies, but not the same-ole', same-ole' variety. I wanted to try something new, but using the ingredients that I had on-hand was a necessity. Better Than Takeout Orange Chicken - StumbleUpon Yesterday as I stood in the kitchen trying to figure out what to make for dinner I wondered to myself, how do those people do it on those shows where they are given random ingredients and are suppose come up with something genius. I think I stood there for a solid 20 minutes looking in the cupboards and staring into the freezer hoping that I would be struck by some ingenious idea. Then I saw the oranges, and it hit me “O-raang Shh-ikun”….that is orange chicken if you can’t understand the accent. I love orange chicken, and I almost always order # 14 Orange Chicken when we order Chinese take out and I wondered to myself if I could make it better at home. This recipe most definitely delivered! Ha ha Chinese food…delivered….get it?

Double Peanut Cupcakes I'm dancing Jig and eating delicious cakes. And there will be a Somerset Maugham's novel instead of textbooks before sleeping. I passed exams. Chocolate Truffles Recipe Enlarge Credit: Todd Coleman MAKES 36 TRUFFLES 16 tbsp. unsalted butter, softened½ cup superfine sugar½ tsp. kosher salt2 oz. bittersweet chocolate, melted6 tbsp. unsweetened natural cocoa powder2 tbsp. brewed espresso or dark coffee, at room temperature2 tsp. vanilla extract2 ½ cups rolled oats1 cup unsweetened finely shredded dried coconut 1. Combine the butter, sugar, and salt in a large bowl and use a handheld mixer set to medium speed to beat the mixture until pale and fluffy, 1–2 minutes. Cuban Flank Steak Recipe (Updated and added to Recipe Favorites August 2010) In one of my previous lives, before I became a food blogger and a South Beach Dieter, I used to be president of my local teacher's association, aka the teacher's union. This was a demanding high-pressure job that I sometimes loved, sometimes hated, but one thing I did enjoy about the job was the chance to travel. I went all over the U.S., and it was in Miami Beach that I had my first experience with Cuban food. I loved the way beef and pork were marinated in lime juice in the Cuban cuisine, so a few years ago I tried to re-create that flavor in this flank steak. Recently I made this again and thought I'd update this post with better photos (even though I cut the steak a little thicker than I wanted, they 're still an improvement on the previous photos!) If you like flank steak, give this flavorful Cuban-style marinade a try!

How To Make Brown Sugar Buttercream Frosting This was my first time making any kind of buttercream frosting, and it was ridiculously easy. And it was Oh My God good. We’re thinking of making another batch and just eating it as a dip with fresh fruit. Super simple and super yummy. Ingredients chinese barbecue pork buns (char siu bao) recipe Recipe: chinese char siu bao (barbecue pork buns) Fork. Stick it to me.