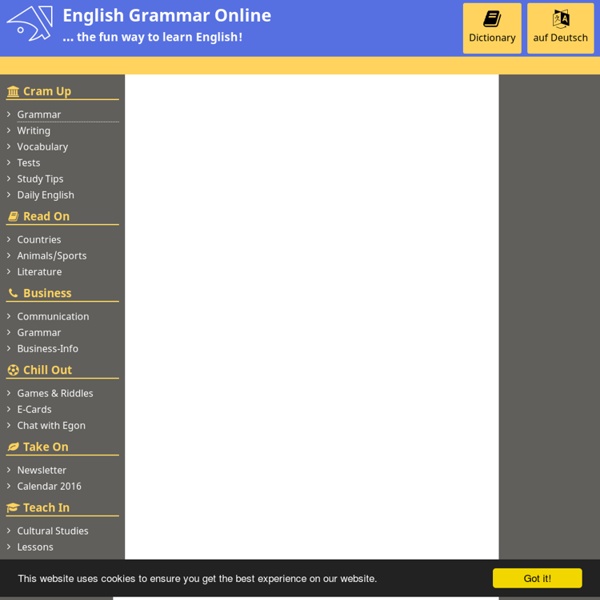 Phrasal verbs are mainly used in spoken English and informal texts. (The more formal a conversation or text, the less phrasal verbs are found.) Phrasal verbs consist of a verb plus a particle (preposition, adverb). The particle can change the meaning of the verb completely, e.g.: look up – consult a reference book (look a word up in a dictionary) look for – seek (look for her ring) look forward – anticipate with pleasure (look forward to meeting someone) There are no rules that might explain how phrasal verbs are formed correctly - all you can do is look them up in a good dictionary and study their meanings. Frequently Used Phrasal Verbs with: break, bring, call, carry, come, do, fall, get, go, keep, look, make, put, run, set, take, turn Position of the Particle The particle is placed either after the verb or after the object. Example: Write down the word. / Write the word down. If the object is a pronoun, however, the particle has to be placed after the pronoun (object). Write it down.

English grammar quiz (ESL) - Phrasal Verbs Exercise 1 - Practice using English phrasal verbs HOME > ENGLISH GRAMMAR EXERCISES > Mixed phrasal verbs 1 CHECK ANSWERS (Your answers will be displayed in a new window) Phrasal Verb is the name given to an English verb which is composed of two or three words. One verb is combined with a preposition (like on, in, under) or an adverb (like up, down, away). Sometimes a phrasal verb can have a meaning that is very different to the meaning of at least one of those two or three words separately. Some text books call these verbs multi-word verbs. Examples: Oscar didn't know the word, so she looked it up in the dictionary. REMEMBER: There are four types of phrasal verbs: 1.

Improve Your Pronunciation One of the most important aspects of learning English is pronunciation. Without clear pronunciation, it is difficult to make yourself understood. However, you might be surprised by the following statement: Pronouncing every word correctly leads to poor pronunciation! Good pronunciation comes from stressing the right words - this is because English is a time-stressed language. Difficulty: Hard Time Required: Varies Here's How: Learn the following rules concerning pronunciation. Tips: Remember that non-stressed words and syllables are often 'swallowed' in English.

How to Improve Your English Pronunciation by Liliya Pavlova It's often found that people struggle to hold up a conversation for too long because they are not able to pronounce words correctly. Many people find it hard to get a job because they are not able to communicate well enough. No matter how talented and skilful you are, if the person you are talking to cannot understand what you are saying, you will not be able to succeed. This is why you should improve your English pronunciation. There are several resources you can use to improve your English pronunciation. Listen to others Probably the easiest way to learn how to pronounce words correctly is to expose yourself to native-speakers. Practice as much as you can As they say, practice makes a man perfect; you should practice the language as much as you can. Don't give up For non-native speakers, learning English is not an easy job especially if your pronunciation is not up to the mark. Read out loud Grab some magazines or books and read out loudly. Be patient

Trinity College ESOL Tests The following tests are available from Trinity: Integrated Skills in English (ISE) These tests are accepted by the UK government for visa purpose. ISE is available at five levels from A2 to C2 on the Common European Framework (CEFR). ISE is a contemporary four skills exam containing two modules: Reading & Writing and Speaking & Listening. For more information and practice tests, please select the exam below: Trinity B1 (B1) Trinity B2 (B2) The ISE exams are taken in a secure centre and cost around £180. You can find out more about the Trinity tests here.

BBC Learning English | Pronunciation Tips Free TOEFL® Practice Test Raul in Spain Thanks for choosing me. I'm a photographer and cinematographer. The first real use I will get out of the iPod will be in the plane to Los Angeles where I'm going to work for the next four years. I took the test because the US government requires a minimum level of english and I needed an 85 out of 120. I used your website to practice for the test and in the end the test went great. Ayane in Japan Thanks for choosing me for the winner! Carlota in Spain I am an internship engineer. Hector in Mexico I am an architect and I work at an international firm. Ayano in Japan I'm a university student. Joel in Dominican Republic I'm an art curator at a private museum. Lucille in France Right now, I'm studying in a French prep school. David in Germany I am currently a business major starting on my sophomore year in Berlin this October. Leonardo in Italy I am a student, next year I will go to an University. Floris in the Netherlands Wow I won! Mizuki in Japan I am still a student.

Linking words Home » English Grammar » Linking words help you to connect ideas and sentences when you speak or write English. We can use linking words to give examples, add information, summarise, sequence information, give a reason or result, or to contrast ideas. Here's a list of the most common linking words and phrases: Giving examples For exampleFor instanceNamely The most common way to give examples is by using for example or for instance. Namely refers to something by name." Adding information AndIn additionAs well asAlsoTooFurthermoreMoreoverApart fromIn addition toBesides Ideas are often linked by and. "We discussed training, education and the budget." You can use also with not only to give emphasis." We don't usually start a sentence with also. As well as can be used at the beginning or the middle of a sentence." Too goes either at the end of the sentence, or after the subject and means as well." Apart from and besides are often used to mean as well as, or in addition to." Summarising Sequencing ideas