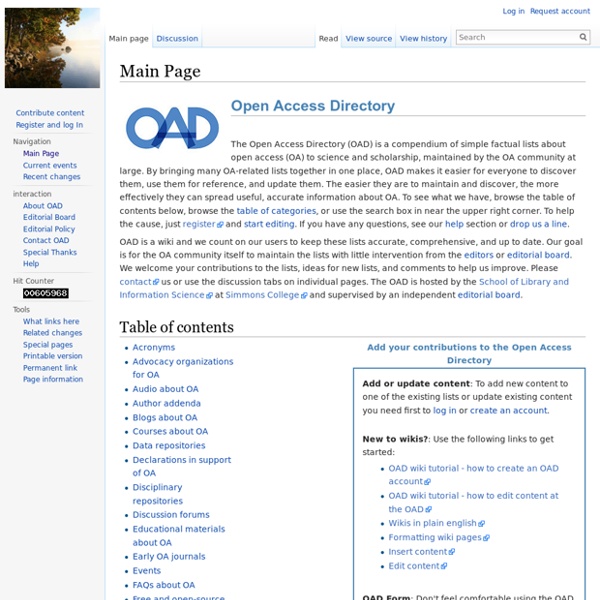 OASPA | Open Access Scholarly Publishers Association Home Page - Directory of Open Access Repositories Links - SHERPA Open Access Basics Glossary of Open Access Abbreviations, Acronyms and Terms - Our comprehensive list, which includes numerous links to the websites of organisations involved in the Open Access movement. Open Access Overview. An introduction to Open Access by Peter Suber, focusing on open access to peer-reviewed research articles and their preprints. A Very Brief Introduction to Open Access. Open Access Archive Briefing Papers. Six things that researchers need to know about open access Another gem from Peter Suber's SPARC Open Access Newsletter. Open Access Journals Open Access journals are the other strand of the move towards open access to research articles. The processes of peer-review and editorial functions are left entirely unchanged: the only difference is the stage at which funds are put into the publication process: and since an entire intermediate "middleman" stage is left out, its cheaper, too. Organisations and initiatives Useful background publications and information See also...

Open access requirements will erode academic freedom by catalysing intensive forms of institutional managerialism In response to last week’s piece on how open access will enhance academic freedom, Kyle Grayson responds by outlining three key reasons why open access will directly–and indirectly–erode academic freedom in the arts, humanities, and social sciences. He argues that gold access will catalyse more intensive forms of managerialism based on crude metrics and that the scope and size of research projects are equally at risk. In light of the formalisation of core aspects of the open access regime by the Higher Education Funding Council (HEFCE) on 1 April 2013, there was an interesting piece by Curt Rice on the LSE Impact blog last week. In fairness, Rice is based in Norway at the University of Tromsø. Academic Freedom I take the definition of academic freedom offered by the UCU as my starting reference point. Open Access and Three Threats to Academic Freedom Unfortunately, there are three ways that open access in the UK will threaten academic freedom in the arts, humanities, and social sciences:

Open Access Journals | Texas Digital Library What if libraries and universities could bypass the high costs of print journals by providing less costly outlets for scholarly work? What if any faculty member with the willingness to do the work could start up his or her own peer-reviewed journal without prohibitive start-up costs? What if scholarship were available to the many instead of the few? With TDL Electronic Journals, faculty members, libraries, and universities can produce refereed, open-access scholarly journals, ensuring the availability of important scholarship to researchers across the world. TDL Electronic Journals are powered by Open Journal Systems (OJS), an open-source journal management and publication software produced by the Public Knowledge Project. What is a TDL Electronic Journal? Using Open Journal Systems software, faculty at TDL member institutions can set up and publish an online journal (or migrate an existing journal) without any costs for the software or TDL technical assistance.