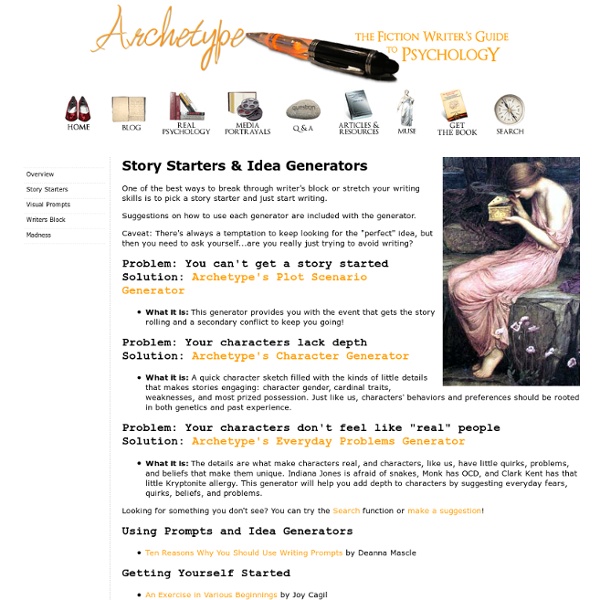 One of the best ways to break through writer's block or stretch your writing skills is to pick a story starter and just start writing. Suggestions on how to use each generator are included with the generator. Caveat: There's always a temptation to keep looking for the "perfect" idea, but then you need to ask yourself...are you really just trying to avoid writing? Problem: You can't get a story started Solution: Archetype's Plot Scenario Generator What it is: This generator provides you with the event that gets the story rolling and a secondary conflict to keep you going! Problem: Your characters lack depth Solution: Archetype's Character Generator What it is: A quick character sketch filled with the kinds of little details that makes stories engaging: character gender, cardinal traits, weaknesses, and most prized possession. Problem: Your characters don't feel like "real" people Solution: Archetype's Everyday Problems Generator Looking for something you don't see? Getting Yourself Started

Discourse Engine - Fiction Generators generators frozen grid magic grid List of Interactive Quizzes The quizzes with a magenta marble are also listed within the section or digital handout to which they apply. The twenty-one quizzes with a green marble and designated "Practice" have been adapted from the instructor's manual and other ancillary materials accompanying Sentence Sense: A Writer's Guide. List of adjectival and demonymic forms of place names The following is a partial list of adjectival forms of place names in English and their demonymic equivalents , which denote the people or the inhabitants of these places. Note: Demonyms are given in plural forms. Singular forms simply remove the final 's' or, in the case of -ese endings, are the same as the plural forms. The ending -men has feminine equivalent -women (e.g. an Irishman and a Scotswoman ). The French terminations -ois / ais serve as both the singular and plural masculine ; adding 'e' ( -oise / aise ) makes them singular feminine; 'es' ( -oises / aises ) makes them plural feminine. The Spanish termination "-o" usually denotes the masculine and is normally changed to feminine by replacing the "-o" with "-a".

Romance story Generator Stories In this story, a courageous boatman is fixed up with an astrologer who inherited a family curse. What starts as friendship quickly becomes obsessive love. This story takes place in a port in a star-spanning magical empire. In it, an insane barber is in love with a serene pundit - all thanks to a revelation. 33 of Life’s Most Powerful Lessons Have you ever had an epiphany? One of those “a-ha” moments where something just clicks for you? Maybe it’s something you’ve been struggling with for a long time, or maybe it was a piece of advice you learned from a friend. Whatever the source of our insight, it’s these moments that bring us to a deeper understanding of our world. The better understanding we have of life, the more we live in the truth. Below are 33 of the most powerful lessons in my life.

Creative Writing Prompts Many creative writers use prompts to generate new material. Prompts can be challenges -- for example, write a story using only one syllable words or craft an alphabet story where the first sentence begins with the letter A, the next sentence B, and so on -- or themes provided by journals, or a poem to which an writer can respond. For example, the Sun lists prompts and deadlines every issue. To see responses, check out "Readers Write."

How to Plot and Write a Novel: Plan Your Novel Writing with the Snowflake Method Many novelists mull over story ideas, letting them ripen and develop over time. When the story is ready to be told, instead of just sitting down and starting to type, try the Snowflake Method. This step-by-step way to write a novel begins with essential elements and becomes more detailed with each step. Essential Elements for Novel Structure Snowflakes have a structure which begins with a simple form and adds more elements to create complex patterns. Novelist and physicist Randy Ingermanson created the Snowflake Method to break novel-writing into steps that build on each other in the same way.

25 Insights on Becoming a Better Writer When George Plimpton asked Ernest Hemingway what the best training for an aspiring writer would be in a 1954 interview, Hem replied, “Let’s say that he should go out and hang himself because he finds that writing well is impossibly difficult. Then he should be cut down without mercy and forced by his own self to write as well as he can for the rest of his life. At least he will have the story of the hanging to commence with.” Today, writing well is more important than ever. Far from being the province of a select few as it was in Hemingway’s day, writing is a daily occupation for all of us — in email, on blogs, and through social media. It is also a primary means for documenting, communicating, and refining our ideas.