The Complete and Utter Newby Tutorial for Dwarf Fortress – Part 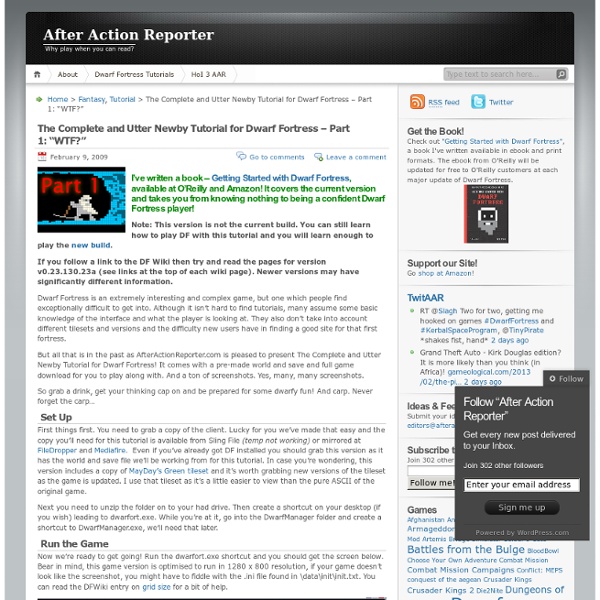 I’ve written a book – Getting Started with Dwarf Fortress, available at O’Reilly and Amazon! It covers the current version and takes you from knowing nothing to being a confident Dwarf Fortress player! Note: This version is not the current build. You can still learn how to play DF with this tutorial and you will learn enough to play the new build. If you follow a link to the DF Wiki then try and read the pages for version v0.23.130.23a (see links at the top of each wiki page). Dwarf Fortress is an extremely interesting and complex game, but one which people find exceptionally difficult to get into. But all that is in the past as AfterActionReporter.com is pleased to present The Complete and Utter Newby Tutorial for Dwarf Fortress! So grab a drink, get your thinking cap on and be prepared for some dwarfy fun! Set Up First things first. Next you need to unzip the folder on to your had drive. Run the Game Now we’re ready to get going! First Look Lets talk about what you can see. Our First Farm Related:  Dwarf Fortress

Dwarf Fortress Starting Guide | The Cesspit. This is a guide designed to be as quick and effective as possible. Dwarf Fortress is a sandbox game simulating a randomly generated world in every detail, from geography to populations and myths. It offers four modes of play, but the one explained will be the first. You will lead an expedition of dwarfs and build their fortress along the years, starting from setting farms and bedrooms, up to the military aspect to deal with sieges of epic proportions. In short it's a city-building kind of game blended with The Sims and Dungeon Keeper. There's a bit of everything, but in the beginning you'll just try to make your dwarfs survive the first winter while you start to dig your wannabe Ironforge. Yes, it's an ASCII game, but it's more easily playable than how it appears. 1- You don't need to memorize commands as everything is accessible through on-screen menus. 2- The ASCII is a graphical representation. (click to read the rest) To begin with you "Create New World" from the start menu. -- Part 2

Stonesense - Official thread Stonesense is a third party visualizer that lets you view your Dwarf Fortress world in a classic isometric perspective. This used to be the official thread for feedback, questions, requests or bug reports. Please see the new Official Stonesense Thread We are always looking for help on Stonesense, and we are in particular looking for isometric sprite artists. So if you want to join us in creating the Official Stonesense tileset, let us know by posting in this thread! Latest VersionStonesense is currently being maintained and distributed as a part of the DFHack package, for more details see the DFHack thread. Stonesense Slate 2.3:Most recent stand-alone release.Download Stonesense SlateDF31.21 compatible. The Stonesense Content RepositoryThe Stonesense Content Repository is where you will find user made extension packs to improve and customize your Stonesense installation. Note: Stonesense Slate is only compatible with the 2010 versions of DF, that is 31.x. If stuff's not working changelog:

Stonesense: New release! Since Jonask no longer has the time to maintain the thread, I have made a new one. The old thread can be found here Stonesense is a third party visualizer that lets you view your Dwarf Fortress world in a classic isometric perspective. This is the official thread for feedback, questions, requests or bug reports. We are always looking for help on Stonesense, and we are in particular looking for isometric sprite artists. So if you want to join us in creating the Official Stonesense tileset, let us know by posting in this thread! Latest VersionStonesense is currently being maintained and distributed as a part of the DFHack package and is compatible with Dwarf Fortress version 0.34.11, for more info, see the DFHack thread.The following links are provided for convenience, but may not be up to date. Stonesense Slate 2.3:This is the most recent stand-alone release. If stuff's not working changelog: Known issues: Screenshots: Videos: Intro by KaelGotDwarves

The Hamlet of Tyranny | Dwarf Fortress Stories Originally from /tg/, a 4chan gaming board. Author unknown. I was visiting a friend of mine earlier today. So it happens neckbeards flock around neckbeards, and he was currently deep into a game of Dwarf Fortress. As I stepped into his room he motions me to quickly check out his monitor. On it was the largest demon invasion I’ve ever seen. Having started as your standard fortress, the Hamlet of Tyranny was uneventful by /tg/ standards. Ashmalice was a fire demon of legendary status. Fast forwarding to the present time, major construction was underway of the fort. Within an hour my friend’s fortress was besieged by a nearly unending horde of demonic horrors. Luckily (and cleverly) my friend had built his fortress in such a way that if any large section had collapsed, then all escape routes would lead out into the wilderness and on a path far from the fortress and defensible by collapsing the ceiling via lever to flood seawater into the tunnel. Stuvok was one of the founding 7.

Dwarf Fortress Stories | The Best Stories from the Dwarf Fortress Community Quickstart guide This guide is intended to be used in conjunction with a save file downloadable here (5 meg download). By downloading it and unzipping it to your Dwarf Fortress directory you will be able to jump straight into a game where the first few hurdles have been overcome - a world has been generated, a location for the fort been selected, the starting skills and items have been bought, and the basic components of the fort completed. This guide aims to explain what the graphics represent, how the menu and interface system works, and guide you through ordering your dwarves to perform a few simple tasks. This guide and associated save file was created using version v0.28.181.40d. Thus, it will not work with version v0.31.01 or later. [Leave feedback] [edit] What you will see when you load the game The game will begin paused (don't unpause yet), centered on the meeting hall where all 7 of your starting dwarves are currently relaxing. You can rearrange this screen by pressing Tab. Sue is a miner.

Dwarf Fortress: SoundSense What is SoundSense? SoundSense is a sound-engine tool for Dwarf Fortress. It plays sounds based on what entries appear in the gamelog.txt. There is a thread at the official dwarf fortress forums, feel free to post your ideas and contributions there. You can also check out wiki page for know issues and other documentation. Downloads: Requires java 1.6 runtime. Remember to add official sound pack (separate download) or to run automated update after instalation! Instalation Instalation and setting it up can be intimidating task if you are not an IT nerd, but bear with us, it can actually be easy (and fun). Non-scary instructions: Install java runtime Download and extract soundsense, does not matter where. First, you need to have java runtime installed. If something similar to 'java' is not recognized as an internal or external command appears, you do not have properly set up instalation and can either fix it or work around it by editing soundSense.cmd which is in root of archive. Sound Packs: