Early 1900s in Colour - All around the world 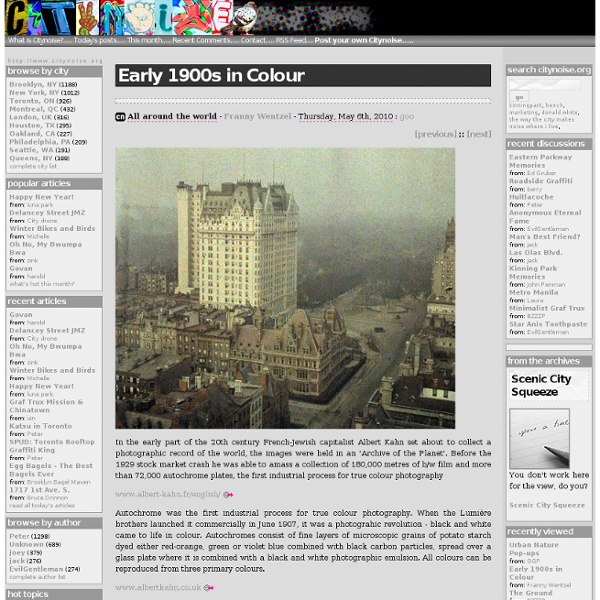 Captured: Great Depression Photos: America in Color 1939-1943 Posted Jul 26, 2010 Share This Gallery inShare324 These images, by photographers of the Farm Security Administration/Office of War Information, are some of the only color photographs taken of the effects of the Depression on America’s rural and small town populations. The photographs and captions are the property of the Library of Congress and were included in a 2006 exhibit Bound for Glory: America in Color. Faro and Doris Caudill, homesteaders. World Press Photo Of The Year 2010 The World Press Photo Of The Year Contest is one of the most prestigious annual events for press photographers. These are the winners in 2010. Read the descriptions underneath each image to find out more about the setting and the photographer.Warning: Some images are graphic in displaying the horror that can be human life.UPDATE: Check out our World Press Photo Of The Year 2011 edition. 101.

Where Science, Art and Photography Intersect (25 photos) Silhouette with Matches Caleb Charland demonstrates lessons in physics and mathematics with his mind-blowing photography. Inspired by children's books of science experiments, he photographs everyday objects (like matches, pens and mirrors) in ways we've never imagined, often using multiple exposures to tell the story. For example, in Fifteen Hours, the last photo in this set, Charland used 15 exposures to show how the flame of a dinner candle beautifully burns down. In still others, like in Cube with Rule and Penlight, Caleb Charland sits in pitch black darkness and, with a penlight in his hand, traces the shape of a cube along a ruler. Though at first glance, you think you're just looking at a box, you soon notice that the mysterious shadows are Charland's hands.

Robert Kennedy's Assassination: Photos From Before and After June 5, 1968 How many times must we live through these throat-paralyzing sequences of days of gun play, grief and muffled drums? That question, posed by LIFE magazine in its June 14, 1968, issue, is freighted with all of the emotions — sorrow, frustration, a kind of bewildered dread — unleashed by the events that unsettled the country in the first half of that schizoid year of 1968. The assassination of Dr. King; the Tet Offensive, the My Lai massacre and the other horrors of the war in Vietnam; and, on June 5, the murder of Robert Kennedy by a Jerusalem-born Palestinian Christian, Sirhan Sirhan, in the kitchen of the Ambassador Hotel in Los Angeles. Here, remembering RFK’s assassination — a murder made, if possible, all the more heinous by the fact that Kennedy was gunned down just as he was finding his true voice as the leader of a vast, disaffected cross-section of the American public — LIFE.com presents a series of photos by the great Bill Eppridge.

BACK TO THE FUTURE 2 (2011) : Irina Werning - Photographer Now its time for KOREA, TAIWAN AND TOKYO. If you live here and want to participate in my project, email me amazing old pictures to : backtothefuturepics@gmail.com Riff Raff 1976 & 2011 London Andy 1967 & 2011 Los Angeles Cretive Design Art Photos and Artworks The archives of the Institute Bishopsgate contain photos of old London, to make society photographing relics of the old London.Photos so qualitatively, that the windows of some houses you can see chunks of sliced bread or read the writing on the playbills store Sv.Makklsfilda in 1883. In these photographs are almost no people, and if they occasionally can be seen, they seem almost ghost

50 Most Strange and Unusual Buildings arround the World The world is full of beautiful strange and fantastic buildings that are the examples of amazing architecture. Architecture Photography brings this beauty to the world, and for this reason, architectural photography is as thrilling as it is heartwarming. In this roundup, we have compiled an amazing collection of some bizarre yet interesting buildings that are reflected through architectural photography. Enjoy! The UFO house in Sanjhih

La mesa de luz » El volcán Puyehue El volcán Puyehue A cloud of ash billowing from Puyehue volcano near Osorno in southern Chile, 870 km south of Santiago, on June 5, 2011. Puyehue volcano erupted for the first time in half a century on June 4, 2011, prompting evacuations for 3,500 people as it sent a cloud of ash that reached Argentina. The National Service of Geology and Mining said the explosion that sparked the eruption also produced a column of gas 10 kilometers (six miles) high, hours after warning of strong seismic activity in the area. AFP PHOTO/CLAUDIO SANTANA A 500 millas de Santiago de Chile ha entrado en erupción el volcán Puyehue obligando a la evacuación de miles de personas. 20 Vintage Photos of Prohibition in Boston Prohibition in the United States was a national ban on the sale, manufacture, and transportation of alcohol, in place from 1920 to 1933. The ban was mandated by the Eighteenth Amendment to the Constitution, and the Volstead Act set down the rules for enforcing the ban and defined the types of alcoholic beverages that were prohibited. Prohibition ended with the ratification of the Twenty-first Amendment, which repealed the Eighteenth Amendment, on December 5, 1933. The introduction of alcohol prohibition and its subsequent enforcement in law was a hotly debated issue. The contemporary prohibitionists (“dries”) labeled this as the “Noble Experiment” and presented it as a victory for public morals and health. The consumption of alcohol overall went down by half in the 1920s; and it remained below pre-Prohibition levels until the 1940s.

70 Photos That Will Take Your Breath Away We here at DPShots believe that the easiest way to learn photography is to learn it by example. Every now and then we come up with some amazing photography examples that take your breath away. This post is no different. s Best Photos by panic-embryo Flickr Hive Mind is a search engine as well as an experiment in the power of Folksonomies. All thumbnail images come directly from Flickr, none are stored on Flickr Hive Mind. These photos are bound by the copyright and license of their owners, the thumbnail links take to you to the photos (as well as their copyright and license details) within Flickr. Because some other search engines (Google, etc.) index parts of Flickr Hive Mind, you may have been led here from one of them.

Related:  Photos • HISTORY IS STILL IN THE MAKING • Photography
Related:  everyday i show