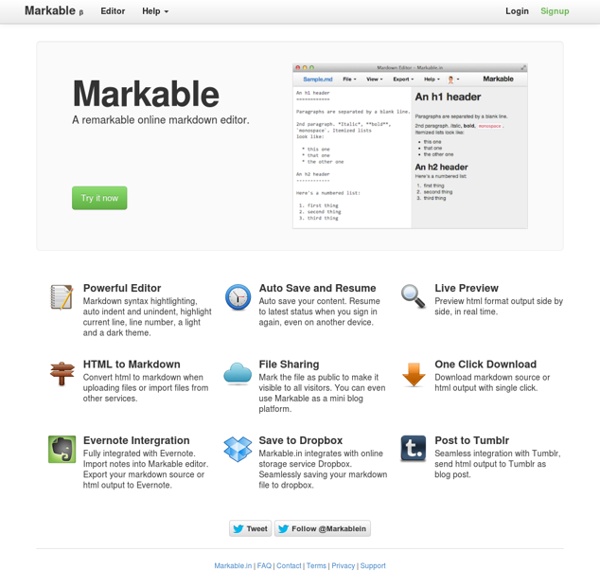 Powerful Editor Markdown syntax hightlighting, auto indent and unindent, highlight current line, line number, a light and a dark theme. Auto Save and Resume Auto save your content. Resume to latest status when you sign in again, even on another device. Live Preview

Markdown Download Markdown 1.0.1 (18 KB) — 17 Dec 2004 Introduction Markdown is a text-to-HTML conversion tool for web writers. Markdown allows you to write using an easy-to-read, easy-to-write plain text format, then convert it to structurally valid XHTML (or HTML). Thus, “Markdown” is two things: (1) a plain text formatting syntax; and (2) a software tool, written in Perl, that converts the plain text formatting to HTML. Markdown.css - make HTML look like plain-text When this section is styled by markdown.css it looks like plain-text, despite being HTML. Inspect it with firebug or click on <HTML/> to see the markup. A strong tag and an em tag get styled like so. How about a link to my site? Lists

Bitcoin Bitcoins are created as a reward in a competition in which users offer their computing power to verify and record bitcoin transactions into the blockchain. This activity is referred to as mining and successful miners are rewarded with transaction fees and newly created bitcoins.[14]:5–7 Besides being obtained by mining, bitcoins can be exchanged for other currencies,[21] products, and services.[22] When sending bitcoins, users can pay an optional transaction fee to the miners.[23] This may expedite the transaction being confirmed. According to a research produced by Cambridge University in 2017, there are between 2.9 million and 5.8 million unique users actively using a cryptocurrency wallet, most of them using bitcoin. The number of active users has grown significantly since 2013 (there were 0.3 to 1.3 million unique users at the time).[28] Etymology and orthography

78 Tools for Writing and Previewing Markdown Markdown is a text-based markup language created by John Gruber in 2004 as a way to write in an easy-to-read format that can be converted into HTML. It uses a very simple formatting syntax of familiar punctuation and characters, which makes writing content for the web a faster and more intuitive experience. As Markdown grows in popularity, new tools and applications have sprung up to cater to writing, converting and previewing the markup language. From tutorials, WordPress plugins and books to dedicated Markdown Service Tools for OS X, there is a wealth of excellent resources available. This post concentrates on 78 of the best tools and applications for writing and previewing Markdown, including resources for Windows, Mac OS X, iOS and the web.

Online Markdown Editor This page lets you create HTML by entering text in a simple format that's easy to read and write. Type Markdown text in the left windowSee the HTML in the right Markdown is a lightweight markup language based on the formatting conventions that people naturally use in email. As John Gruber writes on the Markdown site: Bitcoin-related iOS/iPhone/iPad Apps - bitcointrading.com - bitcoin buy/sell classifieds forum There are several Bitcoin-related apps for iOS! Here are the ones I have discovered, in random order. BitPak by Ominous Megacorp ($3.99)BitPak is the first bitcoin wallet for the iPhone.BitPak syncs with your address book to track your sending and receiving addresses. BitPak syncs with Dropbox to backup your wallet in the event you need to restore your phone.

Cheat Sheet Important: Different types of Mashery pages have different editing properties. Static pages and documentation can take HTML, while the Wiki cannot accept HTML but can accept Markdown. Headers Google Webfonts, The Spy Inside? The FontFeed being a WordPress blog, an article mentioned by Erik van Blokland caught my attention. On his private blog web developer xwolf – alias for Wolfgang Wiese – wrote about an intriguing “side-effect” of the use of Google webfonts in the new WP3.8. Its recent introduction unveiled a refreshed back-end for the WordPress – it all looks indeed quite good and usability is satisfactory. However the developers did something that is not entirely fine in these times of constant surveillance and sourcing of metadata by official agencies and criminals alike. Along with the new back-end the use of Open Sans was introduced.

Markable is a powerful online Markdown editor, with syntax highlighting, auto indent and unindent, current line highlighting, and line numbers. It also allows the conversion of HTML to Markdown when uploading or importing files. Markable allows live previewing and is fully integrated with both Evernote and Dropbox. by sergeykucherov Nov 27