What The Fuck Should I Make For Dinner? 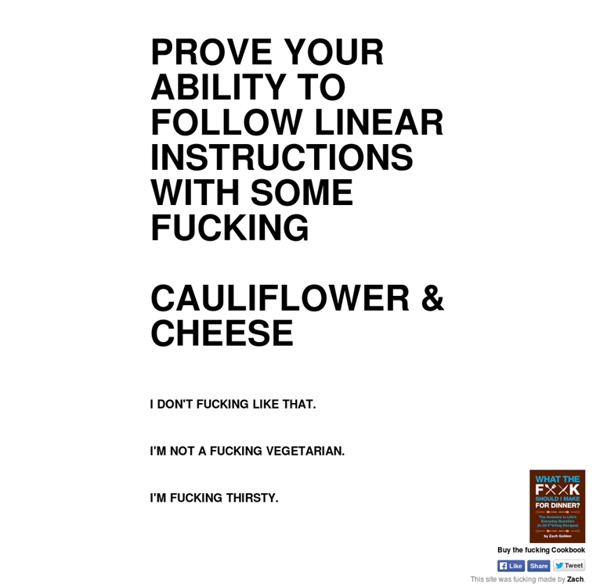 Japan Status Stolen Camera Finder - find your photos, find your camera David Cameron Pretending to be Common In a nod to his felonious Bullingdon days, David Cameron uses the gangster term “sick” in order to describe his restaurant-smashing kindred spirits. David Cameron is photographed dismantling the NHS brick by brick. His press adviser remains unfazed by the evidence as Cameron is wearing a shirt which is not 100% cotton. Watch David Cameron as he touches the hand of a lowly constituent without the aid of gloves or antibacterial gel. Staying true to his working-class roots, David Cameron defies his wife’s wishes by picking IKEA over Clarice Cliff. You can now “Like” David Cameron Pretending to be Common on Facebook. We don’t even have the minimal 25 fans needed to recieve a URL. David Cameron woos an NHS nurse with his anecdote about Boris Johnson using the wrong sized dessert spoon for elevenses. A Conservative publicist steers David Cameron towards a more suitable PR setting after his loud proclamation “I like this graffiti because it is like Caravaggio for urban people”

RED BULL STREET ART VIEW Comparing The United Kingdom to The United States. The magic button — Make Everything OK 60 Small Ways to Improve Your Life in the Next 100 Days Contrary to popular belief, you don’t have to make drastic changes in order to notice an improvement in the quality of your life. At the same time, you don’t need to wait a long time in order to see the measurable results that come from taking positive action. All you have to do is take small steps, and take them consistently, for a period of 100 days. Below you’ll find 60 small ways to improve all areas of your life in the next 100 days. Home 1. Day 1: Declutter MagazinesDay 2: Declutter DVD’sDay 3: Declutter booksDay 4: Declutter kitchen appliances 2. If you take it out, put it back.If you open it, close it.If you throw it down, pick it up.If you take it off, hang it up. 3. A burnt light bulb that needs to be changed.A button that’s missing on your favorite shirt.The fact that every time you open your top kitchen cabinet all of the plastic food containers fall out. Happiness 4. 5. 6. How many times do you beat yourself up during the day? 7. Learning/Personal Development 8. 9. 10. 11. 12. 13.

#Wikileaks #News On #BoA Bank Of America Suck Coming Very Soon Take a Look--> Ten Formal Complaints in Six Months Apparently after receiving three, you are meant to have some kind of formal meeting between the parties involved but this never happened. According to the rules, if there are five complaints, an external mediator has to be bought in. This didn't happen either and I was quite disappointed. Click here to watch me on the roller-coaster. Click here if you want to see the Justin Bieber files for some reason. Click here if you want to see the "man singing". Click here to see photos of Simon naked.

bikes, inline, skates, rollerblades, sofa in Manchester, Greater Manchester, UK | Krrb My picks You have no picks As the saying goes, you can pick your nose and you can pick your friends, but you cannot pick your friends nose. But on Krrb, you can pick through your neighbors stuff. Here’s a tip! To add to your picks, click on the star. If you are a signed in member, your picks will be saved to your account. Sign in or Join for free LifeGem - Memorial Diamonds created from a lock of hair or cremated remains / ashes / cremation Russia plans domed city in Siberian mine A Russian construction company called AB Elise hopes to build a gigantic domed city in an abandoned diamond mine in Siberia, powered by the sun. The project is more of a concept than a reality so far, but the plans show accomodation for 100,000 people over three main levels. The mine in question is the Mir mine in the Mirniy industrial zone in Eastern Siberia. The project, which is described in a series of slides on AB Elise's site, is split between three levels, penetrated in the centre by a vertical farm and forests. However, it might be a tricky construction project -- the climate of the region isn't welcoming -- the ground is permafrost for seven months of the year, and becomes sludge in the summer. What the region does have, on the other hand, is plenty of sun, so the roof of the structure would comprise of solar panels to power the heating and electricity needs of the resident population.