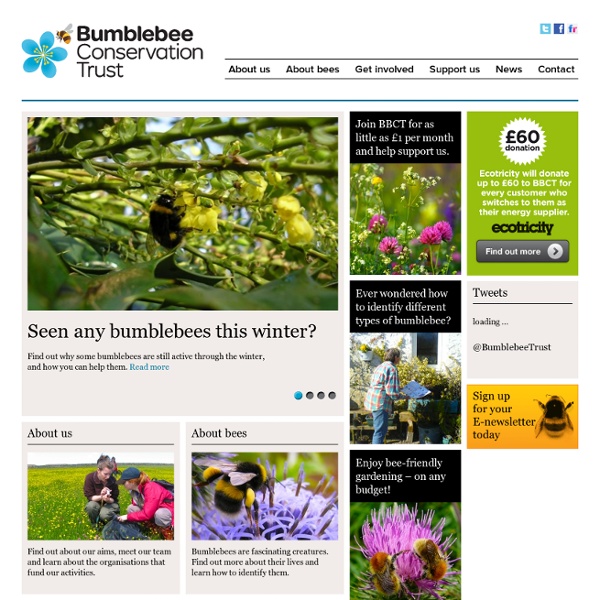 Backwards Beekeepers Conserving Bees - International Bee Research Association Conserving our bees by Robert Paxton The title of this article, reflects a growing awareness and interest in the demise of the world's wild bees, and the impact this may have on other wildlife, ecosystems (including agroecosystems) and the world's economy. The Red Data Book contains a high percentage of the bee species considered to be under threat. I see three major arguments for the conservation of wild bees, namely: Bees are of conservation value in their own right, as a component of the world's biodiversity.Bees are important components of natural ecosystems and play a big role in their functioning. Bees for bees' sake There is a need to know which species are rare, and which are changing in abundance. Numerous inventories of bee species have already been undertaken in both temperate and tropical locations, in the past often without an explicit conservation function. Bees and the wider wildlife Bees and agriculture References 1. 2. 3. 4. 5. 6. 7. 9. 10. 11. 12. 13.

profit motive has no conscience The Xerces Society » Bees Bees are undoubtedly the most abundant pollinators of flowering plants in our environment. The service that bees and other pollinators provide allows nearly 70 percent of all flowering plants to reproduce; the fruits and seeds from insect pollinated plants account for over 30 percent of the foods and beverages that we consume. Beyond agriculture, pollinators are keystone species in most terrestrial ecosystems. The Xerces Society advocates on behalf of bees. Learn more about our Pollinator Conservation program.

Bee Pollen helps avoid allergies, increase… Bee Bees are flying insects closely related to wasps and ants, and are known for their role in pollination and for producing honey and beeswax. Bees are a monophyletic lineage within the superfamily Apoidea, presently classified by the unranked taxon name Anthophila. There are nearly 20,000 known species of bees in seven to nine recognized families,[1] though many are undescribed and the actual number is probably higher. They are found on every continent except Antarctica, in every habitat on the planet that contains insect-pollinated flowering plants. The smallest bee is Trigona minima, a stingless bee whose workers are about 2.1 mm (5/64") long. The largest bee in the world is Megachile pluto, a leafcutter bee whose females can attain a length of 39 mm (1.5"). The best-known bee species is the European honey bee, which, as its name suggests, produces honey, as do a few other types of bee. Bees are the favorite meal of Merops apiaster, the bee-eater bird. Evolution Bumblebees Stingless bees

Illinois illegally seizes Bees Resistant to Monsanto’s Roundup; Kills remaining Queens The Illinois Ag Dept. illegally seized privately owned bees from renowned naturalist, Terrence Ingram, without providing him with a search warrant and before the court hearing on the matter, reports Prairie Advocate News. Behind the obvious violations of his Constitutional rights is Monsanto. Ingram was researching Roundup’s effects on bees, which he’s raised for 58 years. “They ruined 15 years of my research,” he told Prairie Advocate, by stealing most of his stock. A certified letter from the Ag Dept.’s Apiary Inspection Supervisor, Steven D. Chard, stated: “During a routine inspection of your honeybee colonies by … Inspectors Susan Kivikko and Eleanor Balson on October 23, 2011, the bacterial disease ‘American Foulbrood’ was detected in a number of colonies located behind your house…. Ingram can prove his bees did not have foulbrood, and planned to do so at a hearing set in April, but the state seized his bees at the end of March. Source: www.globalresearch.ca Eddie (2136 Posts)

Monsanto buys leading bee research firm after being implicated in bee colony collapse (NaturalNews) Amid all the controversy over genetically-modified (GM) crops and their pesticides and herbicides decimating bee populations all around the world, biotechnology behemoth Monsanto has decided to buy out one of the major international firms devoted to studying and protecting bees. According to a company announcement, Beeologics handed over the reins to Monsanto back on September 28, 2011, which means the gene-manipulating giant will now be able to control the flow of information and products coming from Beeologics for colony collapse disorder (CCD). Since 2007, Beeologics has been studying CCD, as well as Israeli Acute Paralysis Virus (IAPV), for the purpose of coming up with intervention-based ways to mitigate these conditions. Now that Beeologics is owned and controlled by Monsanto, the company is sure to completely avoid dealing with the true causes of CCD and IAPV as they pertain to Monsanto’s crop technologies — GMOs and their chemical counterparts.

Bee propolis contains all the vitamins and… What's Happening to Honey Bees? Leaked document shows EPA allowed bee-toxic pesticide despite own scientists’ red flags Follow the honey: Smoking bees makes them less mad when you move them, but leaked EPA documents might have the opposite effect. It’s not just the State and Defense departments that are reeling this month from leaked documents. The Environmental Protection Agency now has some explaining to do, too. In place of dodgy dealings with foreign leaders, this case involves the German agrichemical giant Bayer; a pesticide with an unpronounceable name, clothianidin; and an insect species crucial to food production (as well as a food producer itself), the honeybee. And in lieu of a memo leaked to a globetrotting Australian, this one features a document delivered to a long-time Colorado beekeeper. All of that, plus my favorite crop to fixate on: industrial corn, which blankets 88 million acres of farmland nationwide and produces a bounty of protein-rich pollen on which honeybees love to feast. It’s The Agency Who Kicked the Beehive, as written by Jonathan Franzen! Hive talking Wimpy watchdogging

Beesource.com - Beekeeping Resources For Beekeepers Since 1997! More evidence links pesticides to honeybee losses Photo by Rebecca Reardon. It’s been three weeks since beekeepers filed a petition with the Environmental Protection Agency (EPA) to remove clothianidin — the pesticide widely suspected to be wreaking havoc on honeybee populations — from the market. In that time three studies have been released that strengthen the link between bee die-offs and neonicotinoids (neonics), the chemical family of which clothianidin is a member. Here’s what they found: Study No. 1: Bees exposed to pesticides are getting lost. French researchers found that honeybees exposed to the neonic pesticide thiamethoxam had trouble finding their way back to their hives — no small problem for a foraging species. Study No. 2: Bee colonies exposed to pesticides are smaller and the ratio of males to females is way off. Study No. 3: The more pesticides bees are exposed to, the faster they die. Bonus irony: High fructose corn syrup is bad for bees too. Let’s get this straight.

EPA Document Shows It Knowingly Allowed Pesticide That Kills Honey Bees The world honey bee population has plunged in recent years, worrying beekeepers and farmers who know how critical bee pollination is for many crops. A number of theories have popped up as to why the North American honey bee population has declined--electromagnetic radiation, malnutrition, and climate change have all been pinpointed. Now a leaked EPA document reveals that the agency allowed the widespread use of a bee-toxic pesticide, despite warnings from EPA scientists. The document, which was leaked to a Colorado beekeeper, shows that the EPA has ignored warnings about the use of clothianidin, a pesticide produced by Bayer that mainly is used to pre-treat corn seeds. The pesticide scooped up $262 million in sales in 2009 by farmers, who also use the substance on canola, soy, sugar beets, sunflowers, and wheat, according to Grist. The leaked document (PDF) was put out in response to Bayer's request to approve use of the pesticide on cotton and mustard. Related: