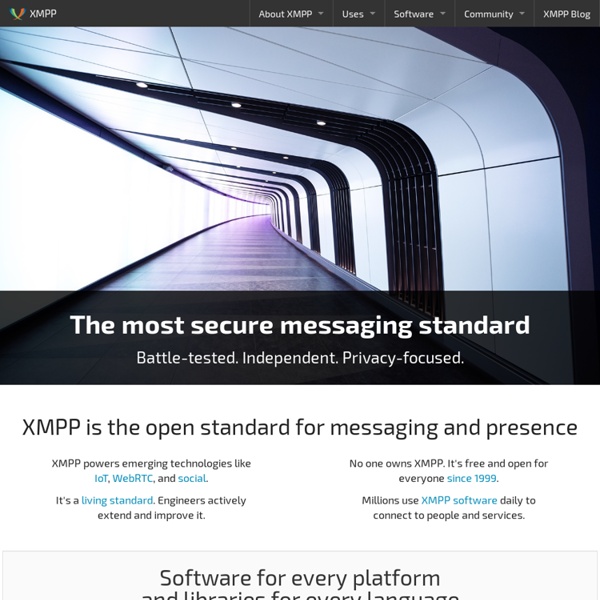 XMPP on the Global Internet of Things Day The 9th of april is the Global IoT day (Internet of Things day) on the site iotday.org and on iotlive.org events and meetups around the world are celebrating and connecting live devices. #IoTDayStockholm is coordinating several schedules from events in different time zones and will be having workshops creating XMPP IoT enabled devices. These will [...] April 7, 2014 Posted in Uncategorized.

vs RSSCloud Editor’s note: With all of the debate lately between RSSCloud versus PubSubHubbub, we wanted to hear from a developer who could actually tell us which one might be better and why. The following guest post is written by Josh Fraser, the co-founder of EventVue, who is an active contributor to PubSubHubbub in his free time. He has contributed several client libraries for PubSubHubbub including a WordPress plugin. Guess which side of the debate he falls on. Announces LynxOS 7.0 with new Security Features to Protect Embedded Connected Devices As more embedded devices connect to the Internet and each other, LynxOS 7.0 meets the increasing security requirements for real-time operating systems SAN JOSÉ, CA—June 5, 2013—LynuxWorks™, Inc, a world leader in the embedded software market, today announced LynxOS® 7.0, the next generation of their most popular real-time operating system (RTOS) enabling embedded developers to add security functionality to their connected devices. The open standards-based LynxOS has been powering millions of embedded devices for the last 25 years across all industries and now adds significant new features to help meet the needs of the billions of next-generation connected devices. Due to the ubiquity of the Internet, a network infrastructure is now in place for the "Internet of Things"—new world of tens of billions of connected devices. The majority of those devices are expected to be hubs and sensor nodes, collecting data and transmitting it from machine-to-machine (M2M). About LynxOS 7.0

What is it ? Real-time web protocol PubSubHubbub's co-creator Brett Slatkin, an engineer at Google, gave a talk at Facebook headquarters today about how the new information delivery system works and how Facebook can support it. He's published his deck on his blog and we've embedded it below as our Real-Time Web Article of the Day. If you're interested in making your content available in real time or more efficiently using real-time content syndicated from elsewhere, this presentation is a must-see.

Company - Your Partner for Open Standards based Middleware since 1997 ProSyst is a software vendor, offering the middleware for the Internet of Things. Our roots are in the field of Java, OSGi and embedded software. In general, the company is entirely focused on open standards technology and open and neutral software platforms for service providers and device manufacturers to deploy apps and services. ProSyst provides the most advanced cloud-based open standards based middleware for managing connected products and implementing innovative M2M applications. The Future Enterprise collaboration company Jive Software posted today about a theory it's advancing on the rise of XMPP (called Jabber in IM) for powering communication services hosted in the cloud. The company also announced that it will include what it says will be the first XMPP-powered document sharing and collaboration tool in the forthcoming 2.0 release of its product Clearspace. If you think AJAX changed the web experience, imagine a web with decentralized, open standards-based IM at its center. That's an exciting thought. This post introduces the concepts at issue in accessible terms, discusses some of the possible impacts of such a trend on innovation and offers some counter-arguments to Jive's rosy picture of the future.

Weightless technology - small is dutiful How do you develop a standard that meets the need for thousands - maybe millions - of devices to connect without human intervention? Welcome to the ‘Weightless’ world. When machine-to-machine (M2M) connectivity problems are discussed there tend to be two responses: one is to note that there have been predictions of inter-machine connectivity for years and the fact that the technology has failed to deliver on them suggests that an inherent impracticality exists that technology cannot overcome. & Semantic Web While the MD5 hack that puts e-commerce sites at risk by faking security certificates received most of the attention at the 25C3 conference in Berlin today, another interesting talk about using XMPP to ensure privacy and security on social networks by Jan Torben Heuer caught our eyes as well. Heuer demoed a social bookmarking service named Diki, which implements some of his ideas, though in the long run, the developers are planning to take this prototype and develop a full-blown social network with a focus on privacy and encryption around this. Heuer argues that ensuring privacy on social networks is almost impossible, due to the centralized architecture of these networks, where all your information is controlled by one corporate entity, and where the user has to simply trust the service provider without having any control over what this provider does with the information.

Smart Citizen Kit The Smart Citizen Project Welcome! The Smart Citizen Project is a collaborative, international effort to deploy a distributed network of citizen-collected data, with the goal of monitoring the environment around us. Hover around each image to find out more! An Open-Source environmental monitoring platform. It comprises a hardware device that can be placed on your balcony or windowsill, an online platform where you can visualize, log, or share your data, and a mobile app.

in Typepad Typepad, the SixApart-owned paid blogging service believed to be larger than any other online, announced this morning that every one of its blogs will now make updates available in real time. The service has implemented the Google-backed real-time protocol Pubsubhubbub, an Atom-centric alternative to the real-time protocol RSSCloud, which competitor WordPress turned on for millions of bloggers last week. A fast-growing number of sites around the web are now flying the real-time banner, no longer requiring that news reading software poll them for updates several times an hour. With two of the largest blogging software providers now real-time, blogging could steal a little thunder back from immediacy-rich social networks like Facebook and Twitter. Josh Fraser, a Pubsubhubbub contributor, wrote a comparison of that protocol and RSSCloud on TechCrunch this weekend.