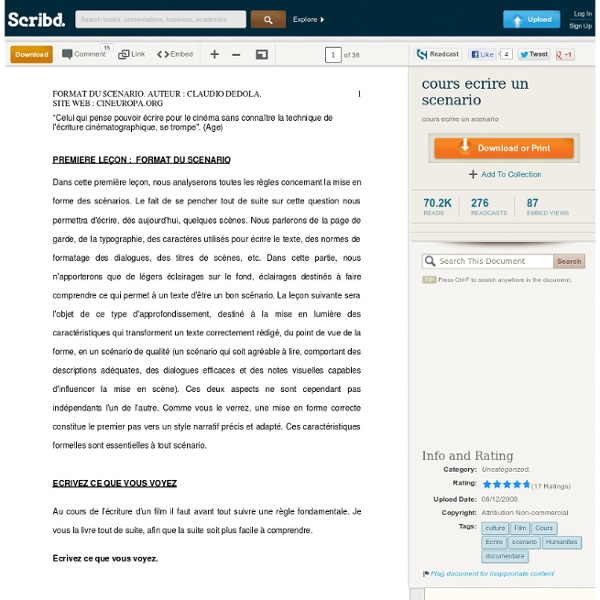 MyFlik - Your Online Movie Studio & Free Film School How to Guides Welcome to Writer's Resources—your resources! This is the section you come to for how-to and formatting guides, an inspirational kick in the pants, and nifty icons and flyers. You'll find handy links to everything in the section there on the left, and here's a quick overview of each item on the list. How To Guides How to Build Great Characters and Stories Scriptwriter Bootcamps and Worksheets The Young Writers Program Director, Chris Angotti, has put together a series of bootcamps and worksheets that can help writers of all ages develop their characters and stories. We've highlighted a few of these resources below to help you plan your scripts. Four-Week Scriptwriting Bootcamp In the next four weeks, our scriptwriting boot camp will teach you everything you'll need to know to tackle the great Script Frenzy challenge this April. Week 2: Creating Conflict and Outlining Your Plot Get your characters off the page and into action in Week 2. Week 3: What Makes a Script a Script? Need a Lift?

Untitled Document Lex Williford Screenwriting Screenwriting Students: This webpage, a supplement to our text, includes many resources beyond our text, including the scripts we will read for this semester and scripts in several different formats which you may read on your own and use for your critical analyses of scripts. UTEP Undergraduate Students and UT Telecampus Graduate Students: This website is for both graduate and undergraduate students. Please report problems or broken links in this website to lex@utep.edu. Screenplay Website Documents Main Site Documents : You may also buy the program in the book store at an academic discount. Workshops and Shared Reviews in the Free Adobe Acrobat Reader This will be a paperless workshop. The first week of class, please download and install the latest version of the free Adobe Acrobat Reader at Here's what a Shared Review looks like: The Word Script Template That’s it for now. Thanks, Lex

Wall-E and Toy Story Screenwriter Reveals the Clues to a Great Story | Aerogramme Writers' Studio Warning: this video contains strong language Last week we posted Pixar’s 22 Rules of Storytelling, a list of 22 golden tips first tweeted by Pixar Story Artist Emma Coats.The article received a tremendous response and since then a number of people have mentioned to us this TED talk by Andrew Stanton. Stanton was the writer for all three Toy Story movies, as well as being the writer/director for Wall-E, Finding Nemo and John Carter. In this captivating lecture Stanton talks about the early days of Pixar, storytelling without dialogue, and capturing a truth from your experiencing it. Stanton also describes being taken at age five to see the Disney’s animated classic Bambi.

Screenwriting Tip Of The Day by William C. Martell - Challenge d You've finished your script, rewritten it to perfection, and now it's ready for market... or is it? I have a friend who has never done a *major* rewrite on his script, and my guess is that you haven't either. Most of us have never had our script challenged. We've never had to think about doing a major rewrite. A few years ago I had a nice sci-fi script set up with a producer who then hired a director... not just any director, this guy was a legend in the horror-sci-fi world. Until the first story meeting, where I realized why his recent films have sucked: he has dumb ideas. Imagine getting notes on STAR WARS like "Does Luke have to be a farm boy? Now, you may think those notes are silly, but they are the exact kind of notes you'll be getting. "What if Darth Vader was Luke's older brother instead of his father? Now you go through each of these possibilities and have to really consider them. Eventually you'll have to defend your choices. Back to *my* sci-fi script... CYBER THURSDAY Sale!

Pixar’s 22 Rules of Storytelling | Aerogramme Writers' Studio These rules were originally tweeted by Emma Coats, Pixar’s Story Artist. Number 9 on the list – When you’re stuck, make a list of what wouldn’t happen next – is a great one and can apply to writers in all genres. You admire a character for trying more than for their successes.You gotta keep in mind what’s interesting to you as an audience, not what’s fun to do as a writer. They can be very different.Trying for theme is important, but you won’t see what the story is actually about til you’re at the end of it. Now rewrite.Once upon a time there was ___. Every day, ___.

Your Screenplay Sucks! Just got back from the three hour extravaganza. Hmmmmm. Needed a bit more time in the editing department. I hate saying that, because Thelma Schoonmaker is amazingly talented, but this time she stumbled. The final bit of the movie, literally the last minute, is a textbook example of when you should cut, but don’t… Early in the movie, the hero is at a booth in a restaurant and says to his buddies, “Sell me this pen.” CUT TO: a couple of hours later. Very end of the movie… Hero is talking to a room full of people. That’s what they should have done, but didn’t. He says, “Sell me this pen,” and the guy he’s talking to stumbles through a couple of dumb sentences about why the pen is great. The correct end point was the instant after he said “Sell me this pen.” the first time. When you read your rough draft, look to see if you’ve got places you can cut out of a scene… but keep… on… going… Just because you have momentum, doesn’t mean you should freewheel forward. Do you agree?

Art Of Sequence | Digital Story-Telling Technologies The Index Card Method and Structure Grid All right, now you should have had enough time to watch at least one movie and note the sequences. Do you start to see how that works? By all means, keep watching movies to identify the sequence breakdown (and I will TRY to get to THE MATRIX this week) but at the same time, let's move on to This is the number one structuring tool of most screenwriters I know. Get yourself a pack of index cards. Now, get a corkboard or a sheet of cardboard - or even butcher paper - big enough to lay out your index cards in either four vertical columns of 10-15 cards, or eight vertical columns of 5-8 cards, depending on whether you want to see your story laid out in four acts or eight sequences. Then write a card saying Act One Climax and pin it at the bottom of column one, Midpoint Climax at the bottom of column two, Act Two Climax at the bottom of column three, and Climax at the very end. And now also label the beginning and end of where eight sequences will go. Now, let me be clear. 1. 2. 3. 4. - Alex