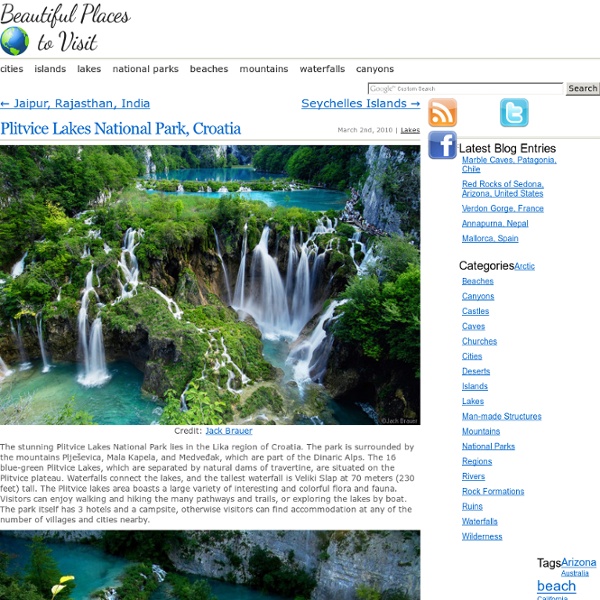 The stunning Plitvice Lakes National Park lies in the Lika region of Croatia. The park is surrounded by the mountains Plješevica, Mala Kapela, and Medveđak, which are part of the Dinaric Alps. The 16 blue-green Plitvice Lakes, which are separated by natural dams of travertine, are situated on the Plitvice plateau. Waterfalls connect the lakes, and the tallest waterfall is Veliki Slap at 70 meters (230 feet) tall. The Plitvice lakes area boasts a large variety of interesting and colorful flora and fauna. Visitors can enjoy walking and hiking the many pathways and trails, or exploring the lakes by boat.

45 Perfectly Timed Photographs That Will Leave You Stunned Chance, position, timing, angles, lighting, and being in the right place at exactly the right moment make these photographs some of the most intriguing and mind-bending pictures of all-time. Explore the perfect timing of capturing lightning strikes on skyscrapers. The perfect timing of snapping a friend’s picture just as a bicycle crashes into a pole. See the perfect angles and timing as Buddha snatches an airplane from the sky and a crane snatches the Eiffel Tower from the ground. Recycled Art: 66 Masterpieces Made From Junks Ever shocked by the beauty of toilet paper rolls, or saw the chicken formed by the egg shells, or witnessed coolest lion made by tires? Heck, all of them are even made by common things you discarded every day, and they are known as recycled art. (Image Source: Kyle Bean) Recycled art is not something that’s beautiful but just a waste of time and space.

My Photography Tutorials - 360 Degree Reverse Photography - featured, Gallery In order to create a , you do not need to be an expert photographer or own expensive photography equipment. You just need to have a standard SLR camera, tripod and a 360-degree panorama software package and of course a good panorama to shoot. Follow these successfully achieving professional results in . First, pick a spot that is equidistant from every point in your photo. You should not have to zoom in and out. Since this will consists of a series of photos taken from one position as the camera is spun in a circle, a tripod is beneficial as it will give more consistent results. A guide to the eateries of France There's a vast number of eateries in France. Most have defined roles, though some definitions are becoming a bit blurred. Here's a quick guide: Auberge 'Auberge' by Ludo29880.

20 of The World's Most Powerful Photographs Viewing 1 of 20 Starving boy and missionary Viewing 2 of 20 Inside an Auschwitz gas chamber Viewing 3 of 20 Heart surgeon after 23-hour-long (successful) heart transplant. Earth from Above a collection of aerial photography... - justpaste.it "Earth From Above" is the result of the aerial photographer Yann Arthus-Bertrand's five-year airborne odyssey across six continents. It's a spectacular presentation of large scale photographs of astonishing natural landscapes. Every stunning aerial photograph tells a story about our changing planet. Coal mine in South Africa Incredible and Scary 3D Pencil Drawings by 17-year old Fredo Realistic pencil drawings are always interesting. It is nice to watch how artist has managed to draw something like it was photographed by camera. However, the plenty of the pencil drawings you have seen by now probably cannot be compared with the following drawings which are literally mind-blowing.Those drawings were made by Fredo, a 17-year old guy from Chile who has found an interesting way to create 3D drawings.Fredo has started to think more seriously about his drawing skills when he was 15.

27 Breathtaking places to visit in your lifetime... Zhangye Danxia landform in Gansu, China The rainbow formation is the result of red sandstone and mineral deposits being laid down for over 24 million years. The swing at the “End of the World” in Baños, Ecuador At the edge of Ecuador sits a rickety tree house (casa del árbol) overlooking an active volcano in the near distance. Croatia's National Parks There's no doubting the attractions of Croatia's Adriatic coastline, but inland lies a more private landscape waiting to be explored. Here nature reaches epic proportions in a wild secret interior that is home to some of the most spectacular natural gems of Europe. The first of these is the string of sixteen Plitvice Lakes, that lies like a jewelled necklace near the border with Bosnia-Herzegovina. The vivid colour of the waters is due to the abundance of minerals in the limestone terrain over which the Korana River runs as it links the lakes in a series of cascades.

Still life: Bent objects & OWNI.eu, News, Augmented UPDATE: The Return of Bent Objects Wires transform these objects from inanimate to hilarious works of art. Little polish girl McDonalds as Sculpture Materials Yeah, this is where those come from Creepy, Crusty, Crumbling: Illegal Tour of Abandoned Six Flags New Orleans [75 Pics] Hurricane Katrina killed this clown. According to the photographer, “An abandoned Six Flags amusement park, someone spray painted ‘Six Flags 2012 coming soon’ on the wall above the downed head. But they were clownin.’ Six Flags will never rebuild here.”

Top 10: Things To Do in Istanbul, Turkey Istanbul is one of the most dynamic, beautiful and exciting cities in the world. You could easily spend weeks there and still not see everything. Located on both sides of the Bosporus Straight (which connects the Black Sea to the Sea of Marmara), the city of Istanbul is split across two continents—Europe and Asia. Known by many names over the centuries—Byzantium, Constantinople, and since 1930, Istanbul—this intoxicating city offers a multitude of cultural, religious, and historic sights. Who Needs Photoshop When These 15 Unbelievable Pictures Are Completely REAL? Whoa. You’ll think you’re bring tricked, but these photos aren’t manipulated or faked… they are 100% real. Each of these jaw-dropping scenes were captured just as they exist. A mixture of perfect timing, optical illusions and just flat-out insane nature led to this gallery being created. All I can say is: Woah. 1. This isn’t a teenager miraculously walking on water: actually, this is just a perfectly timed photo.