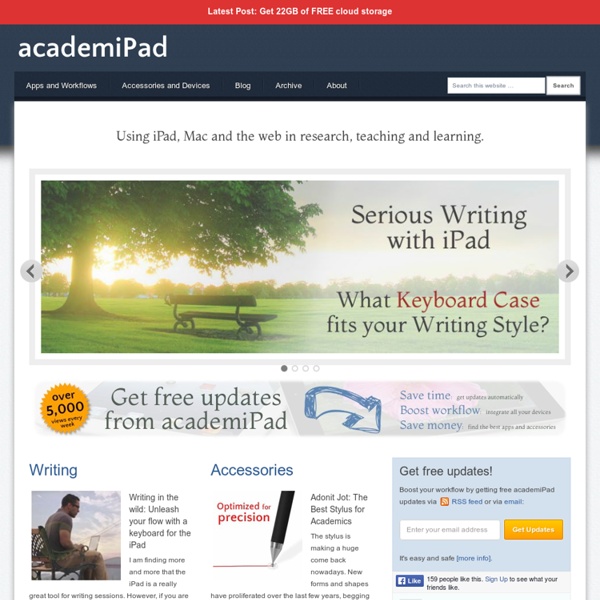 MYP Design Cycle Support Series Part A: Investigate Research and Writing on the iPad - IT’s Academic Topic: Tools for Text Analysis in the Humanities Speaker: Ben Johnston Time: Thursday, April 3, 12:00 PM – 1:00 PMLocation: New Media Center, 130 Lewis Library, First Floor Lunch will be provided. To register for this session: (Registration is not required for attendance, however refreshments may be limited) A sequel to last semester’s ‘Tools for Text Analysis in the Humanities’, this session will give participants a brief yet hands-on introduction to NLTK, the Natural Language Toolkit. SpeakerBen Johnston is manager of OIT’s Humanities Resource Center in East Pyne. Presentation co-sponsored with Digital Humanities Initiative at Princeton (DHI).

High school stops fighting, learns to love students and tech At the public New Tech High School in California, students bring their own laptops and are encouraged to use Twitter in class. The New Tech High School in Napa allows students to bring in their own computersInstead of limiting access to social media, school teaches about digital responsibility Custom program using Google Apps puts assignments, grades in the cloud Napa, California (CNN) -- Many high-school-age students are hooked on their phones and computers. Instead of fighting the kids, some schools like the public New Technology High School in Napa, California, are jumping right in and embracing the technology. "We meet kids where they live," New Tech Principal Michelle Spencer said. Where they live is increasingly online, on instant messenger and Twitter. New Tech High School, founded in 1997, is the oldest member of the New Tech Network, a national nonprofit organization that schools hire to implement project-based learning and embed the use of technology with teachers and students.

The 88 Best iOS Apps For Mobile Learning Mobile learning is here to stay. Students and teachers alike can build entire libraries of apps and web tools that let them learn and do, well, anything. We’ve covered this just about every day and love finding new resources to share. Our friends at Online Universities took a recent list of top iOS apps that ran on Edudemic and turned it into a handy visualization that any teacher could refer back to in a time of need. Brain Exercises Take advantage of these games, puzzles, and other brain teasers to build general cognitive skills needed to process and retain necessary information. Quizzes and Flashcards Whether cramming for a class, heading down the self-taught route, or playing simple games with friends, the following resources bring familiar study strategies into the digital age. Math Overcome math anxiety — or indulge the love — through some of the iPhone’s diverse selection of tools to help that mind crunch some tasty, tasty numbers. Science Geography and History English and Literature

Children learn best when they use their imagination | Teacher Network | Guardian Professional As a child I loved games. Playground games, skipping games, card games, board games like Risk and Colditz, obscure data games like Logacta and, most of all, role-play games, where I could imagine being someone else involved in dangerous and exciting adventures. My love of games continued into adulthood and when I became a teacher I wanted to use them in my lessons to engage and excite my students. Within a few minutes of the lesson starting the children and Luke were involved in a full on mission to rescue the inhabitants of a village, which had been swallowed up by a giant hole. For me it was a revelation and I've spent the rest of my career learning how to teach like Luke and others who use this approach. What I recognised that day was Luke and the children were involved in a game. In follow up sessions the children wrote reports of the rescue, newspaper headlines, letters of thanks, poems of remembrance, safety leaflets and instruction manuals.

The Triumph of the Tablet - Peter Osnos The summer of 2013 has been, in many ways, the summer of the iPad. Over the years, our annual family foray to Lake Michigan has become, aside from the usual vacation pleasures, a measure of how technology has changed our habits when it comes to information and entertainment. We've come a very long way from the farm edition of the Chicago Tribune and a small black and white television with antenna ears. This year, in addition to bringing laptops (mainly for the steady stream of office and personal e-mails that are now, irreversibly, an accepted 24/7 routine), smartphones, iPods, a stack of books, and our New York Times subscription delivered at dawn, we added an iPad (mine) and an iPad Mini (my wife's). Also, for the first time, we had household wi-fi (no longer really optional) and cable installed on our television as an incentive to possible renters in the off-season. The New Yorker, Bloomberg Businessweek, The Economist, and The Wall Street Journal.

25 Most Popular Apps Used By Librarians Thank you for all your great feedback! We updated our list to include even more great apps! Although this is the information age, one of the most common places for people to seek information is still the public library. Fortunately, modern libraries have kept up with technological advancements and have integrated computers, the internet, and other important tools as a normal part of this dynamic hub where paper media meets electronics. In fact, many people view the library as the central information center of the city, and in order to retain this title, librarians now find themselves faced with the need to utilize smartphones and tablet apps to complete their tasks and perform jobs more quickly and efficiently. There are various applications on the market for librarians, each with their own uses, and although not all are helpful in the library, you might be surprised to learn of how many do serve a literary purpose. Check out this list of 45 of the best apps for librarians: 1. 2. 3. 4. 6.

Education reform Education reform is the name given to a demand with the goal of improving education. Small improvements in education theoretically have large social returns in health, wealth and well-being. Historically, reforms have taken different forms because the motivations of reformers have differed. A stated motivation has been to reduce cost to students and society. Related reforms attempted to develop similar classical results by concentrating on "why", and "which" questions neglected by classical education. Many reformers focused on reforming society by reforming education on more scientific, humanistic, pragmatic or democratic principles. The reform has taken many forms and directions. History[edit] Early history[edit] Classical times[edit] Modern reforms[edit] In the modern world, economic growth and the spread of democracy have raised the value of education and increased the importance of ensuring that all children and adults have access to high quality and effective education. H. Dewey[edit]