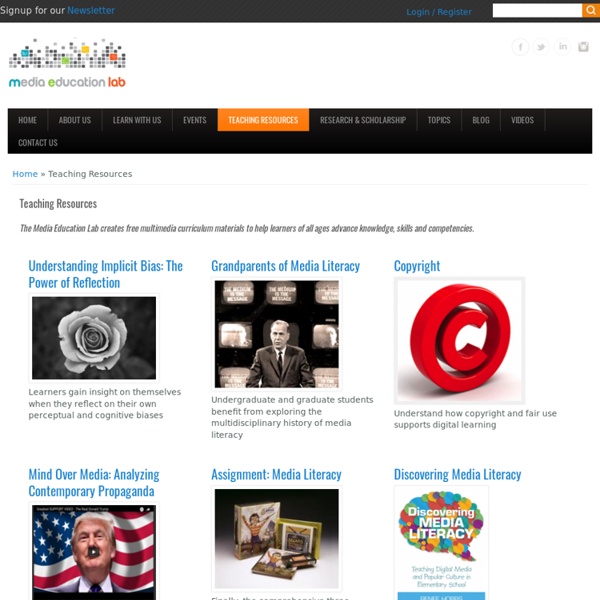 The book by Renee Hobbs helps educators and students understand their rights and responsibilities regarding fair use for digital and media literacy.New book by Renee Hobbs and David Cooper Moore examines digital and media literacy in K-6 informal and formal education, with strategies for understanding teacher motivations and advancing professional development.Engage learners in exploring substance abuse prevention using the pedagogy of media literacyAvailable for purchase for the first time ever, the media literacy smartphone helps students learn to ask questions about what they read, see, watch and listen toTickle the funny bones while activating students' critical thinking about mediaA crowdsourced educational website helps learners explore and analyze the many new forms of propaganda that pervade our everyday digital media environment.

Verification Handbook for Investigative Reporting Craig Silverman is the founder of Emergent, a real-time rumor tracker and debunker. He was a fellow with the Tow Center for Digital Journalism at Columbia University, and is a leading expert on media errors, accuracy and verification. Craig is also the founder and editor of Regret the Error, a blog about media accuracy and the discipline of verification that is now a part of the Poynter Institute. He edited the Verification Handbook, previously served as director of content for Spundge, and helped launch OpenFile, an online local news startup that delivered community-driven reporting in six Canadian cities. Craig is also the former managing editor of PBS MediaShift and has been a columnist for The Globe And Mail, Toronto Star, and Columbia Journalism Review. He tweets at @craigsilverman.

Teaching Information Literacy Now Last week, a new study from Stanford University revealed that many students are inept at discerning fact from opinion when reading articles online. The report, combined with the spike in fake and misleading news during the 2016 election, has school librarians, including me, rethinking how we teach evaluation of online sources to our students. How can we educate our students to evaluate the information they find online when so many adults are sharing inaccurate articles on social media? SchoolJournalism.org : News, Information and Media Literacy The onset of the digital age forever changed the way readers interact with news and the way that journalists do journalism. Now that more data is produced in a single second that can possibly be consumed in a lifetime, the need for news literacy has never been more important. Simply put, news literacy is the ability to use critical thinking skills to judge the reliability and credibility of news reports and information sources.

Social Media Superstar Finalists Announced! Acknowledging the role social media plays in school library promotion, AASL has launched a new recognition program – Social Media Superstars. Nominated and endorsed by their peers, the program will recognize school library professionals who enrich the profession and its work on behalf of students by sharing information, expertise, ideas, encouragement, dialog and inspiration widely via a variety of social media channels. After an open nomination period, the Social Media Recognition Task Force is proud to announce the following finalists in each category. Through April 14, members of the school library community and the public are invited to post endorsements of their personal superstar by leaving a comment on each category’s post. After April 14, the Social Media Recognition Task Force will consider the endorsements and the original nominations and select an overall Superstar for each category.

Building a Culture of Collaboration® In the wake of a contentious U.S. presidential election cycle, researchers and educators are shining a spotlight on critical “information literacy” skills. Determining authority, accuracy, and bias have long been essential aspects of analyzing content and sources of information. Today, this is no easy task for students (and adults as well) when authors of “information” do their best to deceive readers or hide their identity behind domains, such as .org, factual-seeming but phony statistical data, and authoritative-sounding language based on “pants of fire” lies. In her 2014 book, It’s Complicated: The Social Lives of Networked Teens, researcher danah boyd wrote, “becoming literate in a networked age requires hard work, regardless of age” (177).

Fake-news search engine tracks spread of lies - CNET Now you can map the web of lies. A beta version of Hoaxy, a search engine designed to track fake news, was released Wednesday by Indiana University's Network Science Institute and its Center for Complex Networks and System Research. Hoaxy indexes stories from 132 sites known to produce fake news, such as WashingtonPost.com.co and MSNBC.website, and allows you to see how these sites' links spread across social media. Fake news has plagued the internet and social networks for a long time but has grown in prominence in the past year or so, forcing Facebook to introduce new features to flag false articles. The hoaxes have lead to real-life consequences, with a fake news creator taking some credit for Donald Trump's White House win and a Washington DC shooting earlier this month related to "Pizzagate."

Web Evaluation: Does This Website Smell Funny to You? One of my friends spent this past weekend working with her 2nd grade daughter on a research project. While her daughter flew through the arts and crafts portion and was able to handwrite the “sloppy copy” of her presentation, she struggled when it came to typing the final draft. She didn’t know where the period was. She didn’t know how to use the shift key (and then declared that turning caps lock on and off was far superior and easier than using the shift key). News literacy vs. media literacy - Columbia Journalism Review Three years ago, pioneer media literacy scholar Renee Hobbs published a short critique of what she viewed as troubling trends emerging in news literacy education. She argued on the site Nieman Reports against teaching news literacy in a way that romanticizes the industry or merely transforms a Journalism 101 class into a news literacy one, teaching students the fundamentals and ideals of the craft. In the comments, there is a lengthy rebuttal from Dean Miller, director of Stony Brook’s Center for News Literacy. “Dr.

Patterns of Deception - Politics Welcome to FlackCheck.org’s Detecting Patterns of Deception, the beta version of a new page designed to help viewers spot and debunk slippery moves in politics. Watch videos on the Climate Change Debate, the Sequester Debate, the Affordable Care Act Debate, the Gun Debate and the Immigration Debate to see patterns of deception in contemporary debates. On the page, we parse misleading political communication into six main categories. Misunderstanding the Process identifies ways in which misleading assumptions about the nature and extent of executive or legislative power drive problematic promises, attacks and self-congratulatory communication.

Framework for Information Literacy for Higher Education Filed by the ACRL Board on February 2, 2015. Adopted by the ACRL Board, January 11, 2016. This work is licensed under a Creative Commons Attribution-NonCommercial-ShareAlike 4.0 International License. PDF Version Print copies may be purchased from the Association of College and Research Libraries for $15.00 for a package of 10, including standard postage. Expedited shipping is available for an additional charge.

10 Twitter how-tos for Twitter’s 10th birthday – Poynter In honor of 10 years of journalists tweeting (and getting into Twitter fights, tweetstorming and tweeting hot takes), here are 10 guides to using the social network from our archives. These include advice from people such as Craig Silverman, now editor at BuzzFeed Canada, on posting Twitter corrections, Nisha Chittal, manager of social media at MSNBC, on figuring out what's public and private on Twitter, and David Beard, executive editor at PRI, who suggested eight ways to attract followers. 10 ways journalists can use Twitter before, during and after reporting a story By Mallary Jean Tenore, 2011 One way Tenore suggests using Twitter is to curate reactions to the news.