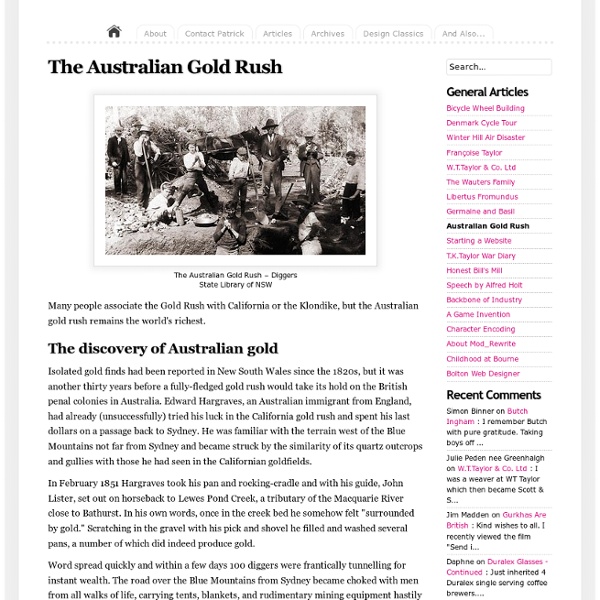 www.patricktaylor.com | articles First published April 28th, 2006 The Australian Gold Rush - Diggers (State Library of NSW) Many people associate the Gold Rush with California or the Klondike, but the Australian gold rush remains the world's richest. The discovery of Australian gold Isolated gold finds had been reported in New South Wales since the 1820s, but it was another thirty years before a fully-fledged gold rush would take its hold on the British penal colonies in Australia. In February 1851 Hargraves took his pan and rocking-cradle and with his guide, John Lister, set out on horseback to Lewes Pond Creek, a tributary of the Macquarie River close to Bathurst. Word spread quickly and within a few days 100 diggers were frantically tunnelling for instant wealth. Edward Hargraves did not make a fortune from gold. The discovery in New South Wales and the resulting rush of labour from the adjoining state of Victoria prompted the Governor of Victoria, Charles J. The British perspective

Australian Gold Rush: 1850 The bonanza in California was only the beginning. An Australian named Edward Hammond Hargraves, who had been there, was certain that the same geological features were to be found in his own country. Returning on the boat from California late in 1850, he predicted that he would find gold within a week. 'There's no gold in the country you're going to and if there is, that darned Queen of yours won't let you touch it,' a fellow passenger told him. The news of the fresh gold field reached England, along with the first gold, aboard the Thomas Arbuthnot. In fact, Hargraves had touched only the fringe of Australian gold. Other secondary rushes followed.

~ GOLD ~ The news of gold discoveries in Australia captured the imagination of the world and sparked a massive influx of immigration to the young colony of Australia. In the early years of the gold rush, NSW and Victoria were the gold mining centres and attracted thousands of hopeful diggers. In March 1851, Victoria’s population was 80,000, not including Aborigines. By 1854 the population tripled to 237,000 and by 1861 it had doubled again to 540,000. The New South Wales gold fields were poorer but the state’s population increased from 200,000 in 1851 to 357,000 in 1861. Gold production reached its peak in 1853 but immigration continued until late in the decade. Victorian gold fields population: The majority of migrants came from the United Kingdom. Canvas towns The colonial town of Melbourne was unequipped to deal with the thousands of people arriving at its docks every day. Letters written to the Australian and New Zealand Gazette describe the scene: Melbourne, October 14 1852 Credits

Chinese at the Australian Goldfields Chinese at the Australian Goldfields At the time that news about the Australian goldrush reached China in 1853, the country had been suffering from years of war and famine. In order to raise money for the fare to Australia, a man would take a loan from a local trader, agreeing to make regular repayments. A village in China When the Chinese arrived at the goldfields, they stayed together in large teams with a head man in charge. There was ignorance about Chinese customs and culture, and the Chinese seemed very strange and different to the European diggers. In an attempt to limit the number of Chinese at the goldfields, a law was passed in 1885 that any Chinese person entering Victoria would pay ten pounds tax, and one pound for a protection fee, the right to mine and live in the colony. Some Chinese returned home after the gold rush, but many stayed here. The inside of a Chinese temple

Gold rush history, Goldfields The discovery of gold in the 1850s and 60s is the most significant event in the evolution of the state of Victoria. Fuelled by extravagant stories of wealth gained at the 1849 Californian gold rush, gold fever hit Victoria following the early gold discoveries in and around Clunes, Warrandyte and Ballarat. But the real rush began with the discovery of the Mount Alexander goldfield 60 kilometres north-east of Ballarat. Mt Alexander (taking in the goldfields of Castlemaine and Bendigo) was one of the world's richest shallow alluvial goldfields, yielding around four million ounces of gold, most of which was found in the first two years of the rush and within five metres of the surface. Mt Alexander goldfield's largest nugget was found in 1855 at Golden Gully by some inexperienced miners who had been sent to a 'duffer' or empty claim. The small town of Moliagul became famous when a 69-kilogram gold nugget was found in 1869 at Bulldog Gully.

Gold rush history - Australia's Golden Outback The Western Australian gold rush began with the first discovery of gold in the late 1890s. News of the gold spread as fast as the region’s wildfires and soon gold prospectors were arriving to seek their fortune and set up gold rush towns in the dusty landscapes of the Kalgoorlie, Goldfields and Murchison regions. They came slowly at first, but as the finds grew so too did the population. Lonely clusters of tents and rough bough sheds were soon transformed into booming Western Australian gold rush towns. Grand hotels lined the main streets and bustling town centres soon boasted butchers, bakers, schools and churches. Many of the original townships remain and though the populations are not as huge, the character buildings and museums provide a fascinating glimpse into the wild and colourful spirit of the gold rush era. Take a journey of discovery, starting at the Prospectors and Miners Hall of Fame in Kalgoorlie-Boulder and visiting some of the region’s many museums.