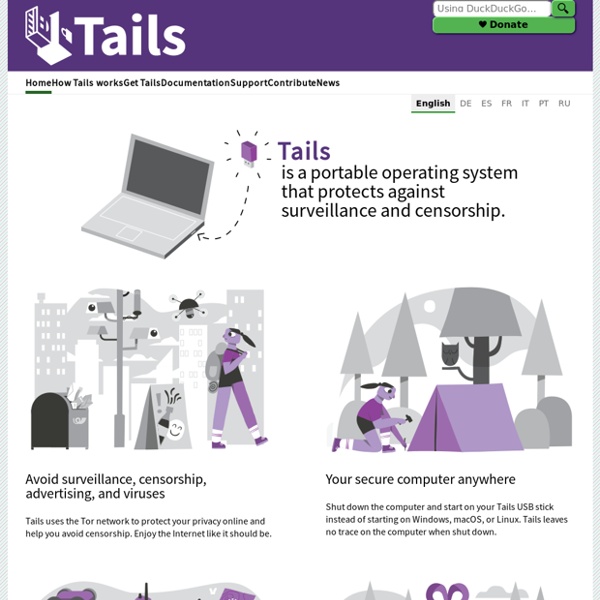 Tails is a live operating system that you can start on almost any computer from a USB stick or a DVD. It aims at preserving your privacy and anonymity, and helps you to: use the Internet anonymously and circumvent censorship; all connections to the Internet are forced to go through the Tor network; leave no trace on the computer you are using unless you ask it explicitly; use state-of-the-art cryptographic tools to encrypt your files, emails and instant messaging. Learn more about Tails. Tails sends its traffic through Tor. Tails has received the Mozilla Open Source Support Award (2019 and 2016), the Access Innovation Prize (2014), the APC FLOSS prize (2014) and the OpenITP award (2013). Related:  code • Security

Nine-board Tic Tac Toe Rules Nine-board tic-tac-toe is a tic tac toe variant where nine ordinary, 3-by-3 tic-tac-toe boards make up a 3-by-3 array. Players take turns making marks (human 'X', computer 'O') in the ordinary tic-tac-toe boards. The first mark can appear anywhere. Each subsequent mark gets made in any un-marked spot in the ordinary board that corresponds to the spot where the previous mark got made. Design Nine-board tic-tac-toe runs entirely in your browser. This program uses a stock alpha-beta minimax algorithm. Configuration A strength of 4 will handily defeat humans who have never played Nine-board before, and most who have. A strength of 0 causes the program to use the static utility function only - no mini-maxing happens. You probably want to use even values for strength: odd numbers look one move ahead for how the computer assumes the human will move, and causes goofy results. Download and Install

AOL's disturbing glimpse into users' lives AOL's publication of the search histories of more than 650,000 of its users has yielded more than just one of the year's bigger privacy scandals. The 21 million search queries also have exposed an innumerable number of life stories ranging from the mundane to the illicit and bizarre. For its part, AOL has apologized for a researcher's disclosure of the massive database and has yanked the file from its Web site. It was too late: The database already had been mirrored. That database does not include names or user identities. From that massive list of search terms, for instance, it's possible to guess that AOL user 710794 is an overweight golfer, owner of a 1986 Porsche 944 and 1998 Cadillac SLS, and a fan of the University of Tennessee Volunteers Men's Basketball team. That's pretty normal. The following are a series of excerpts compiled by CNET News.com from the AOL search logs, with each user's search terms included in chronological order.

8.24 million Gamigo passwords leaked after hack Months after Gamigo warned its users of a server breach, 8,243,809 user account credentials (e-mail addresses and encrypted passwords) have made their way online. If you've never heard of it, Gamigo is a German online games publisher that focuses on Massively Multiplayer Online Role-Playing Games (MMORPGs) and has so far released 14 client games as well as five browser games. To check whether your account was one of the 8 million that have been compromised, head over to PwnedList, which tells me just recently finished adding this release to its databases. So, how did this all start? Sometime in late February 2012, Gamigo was hacked by someone who calls him or herself "8in4ry_Munch3r." The company's website was taken down for an extended period of "maintenance." Dear Community,As you have all already noticed, our game servers, websites and forums are partially unreachable at the moment. The gaming site also offered its users guidance on what to do in the aftermath of the hack.

How to build your own Ambilight TV with Raspberry Pi and XBMC « techtalk – Christian Moser I always wanted one of those colourful glowing large TV screens in my living room but I never felt like paying a fortune for it. So, why don't do it on my own? I ordered two Raspberry Pis, which seemed like a perfect fit for a media center and a LED controller because of the built in SPI bus interface. After some research, I decided that using SMD LED strips with WS2801 chips would be the best match for a Raspberry Pi controller. We'll setup the necessary hardware first. I've ordered following parts to complete the installation from boxtec.ch You'll also need tools for soldering. Regarding the spec sheet, the 5 V LED strip consumes approx. 7.68 Watts per meter or 1.5 A. Power supply calculation Total power consumption: 3.8 m LED strip x 1.5 A + 1.0 A Raspberry Pi Model B = 6.7 A / 33.5 W. Fortunately, the Raspberry Pi requires also 5V, so you'll be able to power up the strip and the Pi with the same 5V power supply. WS2801 LED strips have always four connectors.

Turing tarpit A Turing tarpit is a language that aims for Turing-completeness in an arbitrarily small number of linguistic elements - ideally, as few as possible. History[edit] The 1950's and 1960's were something of a heyday for Turing tarpits. Academic interest in them was keen, and they enjoyed considerable popularity in computability research circles. Near the middle of the 1960's, however, the bubble of optimism surrounding them burst. In his 1987 paper The Busy Beaver Game and the Meaning of Life, Allen Brady relates a private conversation with John McCarthy (inventor of LISP) circa 1964 in which Prof. We thought if we were to find the smallest universal machine then we could learn a great deal about computability -- of course that wouldn't be so! In the final chapter, Very Simple Bases for Computability, of his 1967 book Computation: Finite and Infinite Machines, Marvin Minsky writes: Although enthusiasm in them has declined, Turing tarpits do remain valuable as an academic tool. Etymology[edit]

Warning Even though we do our best to offer you good tools to protect your privacy while using a computer, there is no magic or perfect solution to such a complex problem. Understanding well the limits of such tools is a crucial step to, first, decide whether Tails is the right tool for you, and second, make a good use of it. If the computer has been compromised by someone having physical access to it and who installed untrusted pieces of hardware (like a keylogger), then it might be unsafe to use Tails. When starting your computer on Tails, it cannot be compromised by a virus in your usual operating system, but: Tails should be installed from a trusted system. See the corresponding FAQ. It is also impossible for Tails to protect against attacks made through the BIOS or other firmware embedded in the computer. See for example, this attack on BIOS by LegbaCore. Tor is about hiding your location, not about encrypting your communication. See also Can I hide the fact that I am using Tails?

Rainbow Tables: Your Password's Worst Nightmare By Andy O'Donnell Updated December 16, 2014. While you might think of Rainbow Tables as eclectic colorful furniture, those aren't the ones we are going to discuss. The Rainbow Tables that we are talking about are used to crack passwords and are yet another tool in the hacker's ever growing arsenal. What the heck are Rainbow Tables? Here's the basic concept behind Rainbow Tables: I'm a bad guy who has just plugged a thumb drive into a server or workstation, rebooted it, and ran a program that copies the security database file containing user names and passwords to my thumb drive. The passwords in the file are encrypted so I can't read them. What are my options for cracking passwords? My second option is to load a password cracking dictionary containing hundreds of thousands of commonly used passwords and see if it gets any hits. When a password is "tried" against a system it is "hashed" using encryption so that the actual password is never sent in clear text across the communications line.

Turn a Raspberry Pi into a Steam Machine with Moonlight Valve’s Steam Machines aim to bring your Steam game library right into your living room (but at a rather steep premium). Today we’ll show you how to bring your Steam library (plus all your other computer games) to your living room for a fraction of the price with a Raspberry Pi. Why Do I Want To Do This? Hands down the most versatile gaming experience is the one you have on your Windows computer. Whether you’re playing new cutting edge releases or emulating 20+ year old games, you can simply play more games on your PC than anywhere else. Problematically, however, most of us keep our PCs in our home offices, dens, spare bedrooms, and anywhere but the where comfiest seat in the house with the biggest screen is: the living room. Wouldn’t it be nice if you could just stream what’s on your PC right to your HDTV set without bringing the whole computer along for the ride? How Does It Work And What Do I Need? We really, really, want to stress that last bit to clear up any confusion. Steam

Piet (programming language) History[edit] Early implementations of INTERCAL were tied to the IBM System/360 and an unidentified Atari computer (probably the Atari 2600) and have not survived. For many years INTERCAL was represented only by paper copies of the INTERCAL manual. The language's revival in 1990 as an implementation in C under Unix stimulated a wave of interest in the intentional design of esoteric computer languages. In 1992, Wouter van Oortmerssen created FALSE, a small stack-oriented programming language, with syntax designed to make the code inherently obfuscated, confusing, and unreadable. Esolangs were named for Chris Pressey's page Esoteric Topics in Computer Programming[3] Esoteric programming terms[edit] Turing tarpit[edit] Turning tarpit[edit] Stateful encoding[edit] A method of encoding programs, such that each substring of the encoding is an instruction to both: Locate the next instruction in a list, andApply it to transform the current program state. Here is an example based on reMorse or THRAT: