Center for a Stateless Society 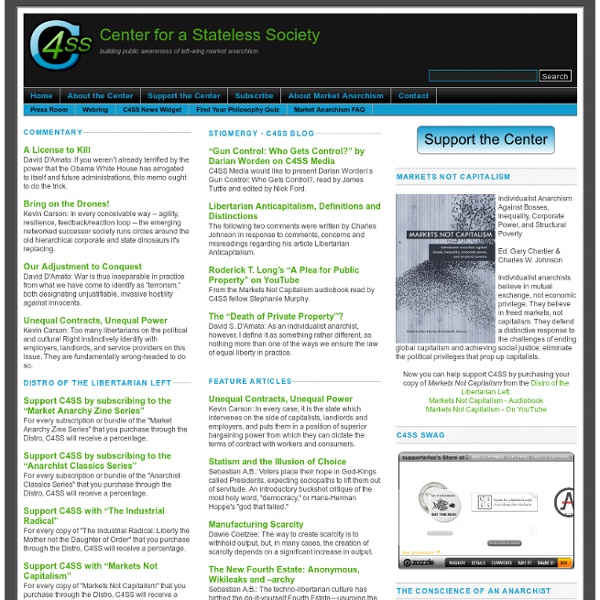 MarcStevens.net Why Advocates of Freed Markets Should Embrace "Anti-Capitalism" Republished from c4ss.org By Gary Chartier Defenders of freed markets have good reason to identify their position as a species of “anti-capitalism.”[1] To explain why, I distinguish three potential meanings of “capitalism” before suggesting that people committed to freed markets should oppose capitalism in my second and third senses. Then, I offer some reasons for using “capitalism” as a label for some of the social arrangements to which freed-market advocates should object. Three Senses of “Capitalism” There are at least three distinguishable senses of “capitalism”:[2] Capitalism-1 an economic system that features property rights and voluntary exchanges of goods and services. Capitalism-2 an economic system that features a symbiotic relationship between big business and government. Capitalism-3 rule — of workplaces, society, and (if there is one) the state — by capitalists (that is, by a relatively small number of people who control investable wealth and the means of production).[3] A. B. C.

Paul Weyrich Paul Michael Weyrich (October 7, 1942 – December 18, 2008)[1][2][3][4] was an American religious conservative political activist and commentator, most notable as a figurehead of the New Right. He co-founded the conservative think tanks, the Heritage Foundation,[5] the Free Congress Foundation, and the American Legislative Exchange Council (ALEC). He coined the term "moral majority", the name of the political action group Moral Majority that he co-founded in 1979 with Jerry Falwell. He switched from the Roman Rite of the Roman Catholic Church to that of the Melkite Greek Catholic Church and was ordained protodeacon. Early life and conservative activism[edit] Born in Racine, Wisconsin to Virginia M. In 1966,[5] he became press secretary[citation needed] to Republican U.S. Political activism (1973 - 2008)[edit] Over the next two decades, Weyrich founded, co-founded, or held prominent roles in a number of other notable conservative organizations. Rail transit activism[edit] Views[edit]

Strike-The-Root: A Journal Of Liberty Power robs the brain of empathy Researchers have some new insights into how power diminishes a person's capacity for empathy. According to scientists, a sense of power shuts down a part of the brain that helps us connect with others. For their study that builds on past information about how the brain operates, the researchers found that even the smallest bit of power - for instance from a job promotion or more money - can shut down our ability to empathize with others. Sukhvinder Obhi, a neuroscientist at Wilfrid Laurier University in Ontario, Canada and his colleagues Jeremy Hogeveen and Michael Inzlicht, conducted an experiment that shows people in charge can lose their ability to be compassionate because power affects the mirror system of the brain. A look at the mirror system The mirror system is activated by neurons in the brain when we watch other people. Read more...

The Heritage Foundation The foundation took a leading role in the conservative movement during the presidency of Ronald Reagan, whose policies drew significantly from Heritage's policy study Mandate for Leadership.[3] Heritage has since continued to have a significant influence in U.S. public policy making, and is considered to be one of the most influential conservative research organizations in the United States.[4] History and major initiatives[edit] Early years[edit] The Heritage Foundation was founded in 1973 by Paul Weyrich, Edwin Feulner and Joseph Coors.[5] Growing out of the new business activist movement inspired by the Powell Memorandum,[6] discontent with Richard Nixon's embrace of the "liberal consensus" and the nonpolemical, cautious nature of existing think tanks,[7] Weyrich and Feulner sought to create an organization that would supply policymakers with concise, timely position papers. With $200,000 from Coors, the Analysis and Research Association was created in 1970. Reagan administration[edit]

Gary Chartier - Advocates of Freed Markets Moral Majority Jerry Falwell, whose founding of the Moral Majority was a key step in the formation of the New Christian Right The Moral Majority was a prominent American political organization associated with the Christian right. It was founded in 1979 and dissolved in the late 1980s. History[edit] Before establishment[edit] The origins of the Moral Majority can be traced to 1976, when Jerry Falwell embarked on a series of “I Love America” rallies across the country to raise awareness of social issues important to Falwell.[1] These rallies were an extension of Falwell’s decision to go against the traditional Baptist principle of separating religion and politics, a change of heart Falwell says he had when he perceived the decay of the nation’s morality.[2] Through hosting these rallies, Falwell was able to gauge national support for a formal organization and also raise his profile as a leader. Establishment and organizational activity[edit] Dissolution[edit] Organizational goals and composition[edit]

Corporate psychopathy: Talking the walk. [Behav Sci Law. 2010 Mar-Apr] Our Platform Ohio Economy Needs Small Business and Small Business Needs Single-Payer Small business and the self-employed are driving Ohio’s growing service economy to everyone’s advantage, providing jobs for their communities, paying wages to their neighbors, and creating income and tax revenues that stay in the local area. Our economy needs these small businesses to help generate the recovery from the continued disastrous loss of our manufacturing base. The single largest obstacle to the success of small business operators is the prohibitive cost of providing health care coverage for themselves and their employees, and the inability to gauge future costs. Competitive wages, safe and reasonable working conditions and health care coverage are central to mutually beneficial relationships between employers and employees. These relationships were typical of collective bargaining between unions and companies, and are once again possible on a broader scale thanks to the Health Care for All Ohioans Act.

Libertarian Class Analysis Say the words “class analysis” or “class conflict” and most people will think of Karl Marx. The idea that there are irreconcilable classes, their conflict inherent in the nature of things, is one of the signatures of Marxism. That being the case, people who want nothing to do with Marxism quite naturally want nothing to do with class analysis. So it ought to be of interest to learn that Marx did not originate class analysis or the idea of class conflict. The names of the key 19th-century French historians are Charles Comte, Charles Dunoyer, and Augustin Thierry, whose publication, Le Censeur européen, was a hotbed of radical liberal thought. As Say wrote in another of his works, The huge rewards and the advantages which are generally attached to public employment greatly excite ambition and cupidity. This is important to the issue of class, the purpose of which is to identify the exploiters and exploited. Who were the exploiters? Political economy and liberty Class warfare and statism