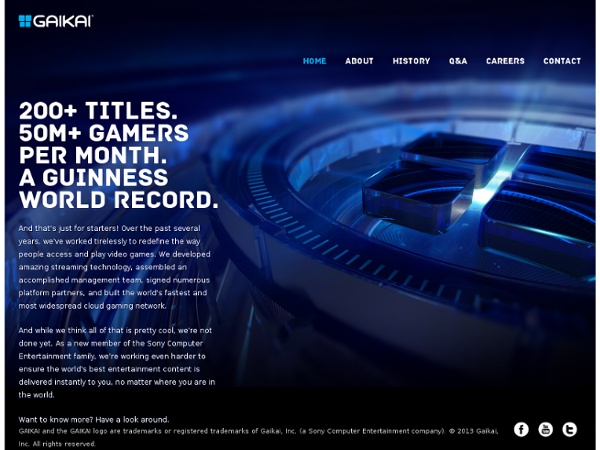 Mochi Flash Game Resource Center / Flash Games Market Survey The Flash Games Market Survey was created by Mochi Media in partnership with other members of the Flash games community. The goal of the survey is to capture and publish the first ever census on the state of the Flash games developer industry. To administer the survey, Mochi Media partnered with Adobe, FlashGameLicense, JayIsGames and NewGrounds to administer the survey which received over 1,104 completed responses. Despite its rapid growth in recent years, limited research has been done and little comprehensive data is available about the Flash gaming market. Today, the developers, publishers and supporting companies in the industry largely operate on assumptions, interpretation of their own data, or general metrics from outside services such as comScore and other syndicated measurement services.

Samsung Smart TV Evolution Kit: Update your TV Every Year Soon you will be able to update your Smart TV every year with the latest technology. Samsung's Evolution kit upgrades your Smart Evolution enabled TV without having to replace the whole set. With Increased processor speed, more functions and additional content, your TV will never be the same again.

Online Gaming Statistics - Online MBA Approximately 20 million players have spent 17 billion hours on Xbox Live. That’s more than 2 hours for every person on the planet. The online gaming market is worth more than $15 billion, with a total of 40 million users who have registered PlayStation Network accounts. Surprisingly, online gaming is somewhat equally divided between genders, at 58% male players and 42% female players. With progresses in technology and Internet, online gaming is becoming more popular across all boards.

Academic libraries and publishers: Working together in support of the creation and dissemination of new research knowledge and innovation Last month, we were delighted to host an event for our founder, Sara Miller McCune, to honour the academic library community. We had invited librarians, academics and senior university representatives from the UK and beyond to join us in celebrating the academic library, and to consider its future. The reception came at the end of a day of themed meetings for SAGE: a committee meeting of our library advisory board, a key group that supports SAGE in guiding our understanding of the changing library environment; and a round table discussion on the future of libraries in an Open Access landscape, hosted jointly with the British Library. Events like this are key in enabling strong communication between libraries and SAGE, to ensure that we continue to provide the support and services needed. We will be sharing more from both these meetings soon.

Musique + Vidéo The purpose of this Q&A is for Zune users to learn where to find information and support for their Zune products and services, and to learn how to take advantage of Xbox Music and Xbox Video. What’s changing with the Zune Marketplace? Zune Marketplace no longer supports rental and purchase of content, or browsing movies and TV shows.

WoW Played in Google TV Via Cloud Gaming It's World of Warcraft streamed onto Google TV via a host PC. Over the weekend Aftercad announced that Blizzard's World of Warcraft can be played on Google TV by way of using its GameString Adrenalin "personal cloud gaming" service. The catch is that the game doesn't play directly on the device-- it's streamed in from the consumer's PC to the TV's built-in Google Chrome browser. "Our GameString technology represents the next generation in cloud gaming as it doesn't rely on downloads, plugins, java or obscure codecs to work," said Chris Boothroyd, CEO of Aftercad. "The proof is in the fact it works with the Google TV right out of the box while other cloud gaming services will have to write an app to run it on." The company claims that GameString Adrenalin is different than other cloud gaming efforts by leveraging the full potential of Flash and HTML5 on the PC or mobile device.

Gaikai cloud-gaming service gets Intel cash to put Mass Effect in your browser Looks like OnLive could have some competition in the form of Gaikai, another cloud-computing service that promises performance gaming without a console. Unlike OnLive, which uses a standalone box, Gaikai streams games directly into your browser; we've already seen it streaming WoW to Apple's iPad. Intel Capital has just invested an unspecified amount [pdf link] into Gaikai, which will use the company's hexacore servers and SSDs. Another partnership, with Limelight Networks, will give Gaikai the flexible infrastructure it needs to funnel gaming through to end-users. Gaikai 'Not Concerned' With Onlive's Cloud Gaming Patent David Perry, game industry veteran and CEO of cloud-based gaming company Gaikai, said he isn't worried about a new patent awarded to fellow streaming game firm OnLive. "We share OnLive's vision that streamed gaming is a key element of the future of the video game industry," Perry told Venture Beat in a statement. "We do not expect the general concept of remote gaming to be patentable, as many of us played remote games in the '70s, '80s and '90s." OnLive announced this week it was awarded a U.S. patent pertaining to cloud-based gaming, eight years after its original filing. Cloud-based PC gaming allows users with modest hardware configurations to play higher-end PC games, which are hosted on powerful remote servers that handle the brunt of the processing requirements.