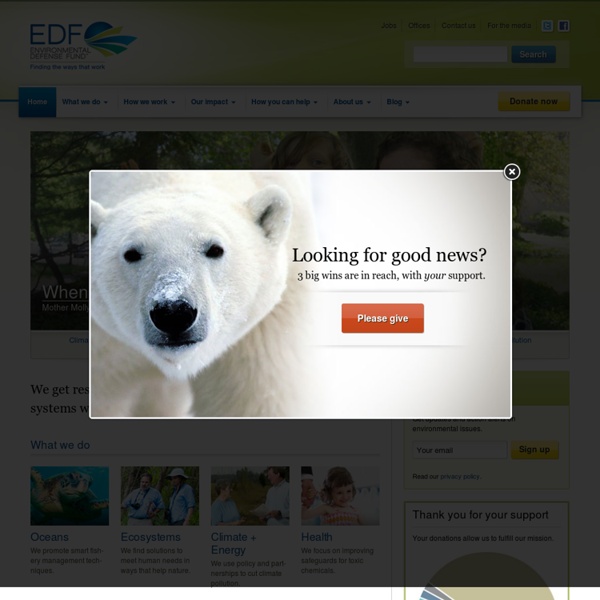 By Social Entrepreneurs, For Social Entrepreneurs® Welcome to SkollWorldForum.org former Social Edge users! Social Edge was an online community created by the Skoll Foundation from 2003 - 2013. The site has since closed as we have focused efforts on the new Skoll World Forum platform. However, if you were a Social Edge user, you will be pleased to know that all of your articles and comments have been saved and can be browsed below. In addition, if there is a specific piece of content or a particular author you are looking for, please use the search bar at the top of the screen. UN reports that 22,000 elephants were poached last year in Africa Elephants are one of Africa’s critical “keystone” species, and estimates place the total population of elephants around 450,000. The loss of 22,000 mostly adult elephants, or roughly 5%, is critical as elephant young require the care of the parent. The demand for ivory that fuels the poaching conducted on the continent comes primarily from Asia, and more specifically from wealthy Chinese who pay over $1000 per pound for what is seen as a status symbol. The poaching trade has advanced beyond automatic weapons and chainsaws in its process to harvest the animals' tusks.

Mew From Bulbapedia, the community-driven Pokémon encyclopedia. It is not known to evolve into or from any other Pokémon. Mew is the last Pokémon in the Kanto Pokédex. Biology Mew is a pink, bipedal Pokémon with mammalian features. Its snout is short and wide and it has triangular ears and large, blue eyes. How Fat Might Be the Key to Improving People's Lives Sometimes the most amazing scientific discoveries happen by accident; a loaf of moldy bread or a game of connect the dots with a public water pump becomes a clue to a breakthrough. Researchers at UCLA announced a similar happy accident this week: the discovery of human stem cells in adipose tissue, aka fat, taken from liposuction procedures. This is actually nothing new; researchers have noted the presence of adipose stem cells since 2001, and they’ve been used in a variety of procedures in both human and veterinary research.

COMPASSION AND EMPATHY FOR ANIMALS WARNING: Video contains graphic footage The Polar Bears ,their Habitat shrinks by Global Warming. By the additional Hunting for their Pelts they are in Danger of Extinction. Wildfire sparked by target shooters results in Utah evacuations Thousands of families in Utah have been evacuated from their homes as winds continue to fuel a wildfire believe to have been sparked by target shooters. Residents of at least 2,300 properties in the northern part of the the state sought refuge Friday, as flames scorched a growing area around 40 miles south of Salt Lake City. High winds that have helped fan the blaze onto tinder-dry grasslands are expected to last throughout the weekend, prompting fears of further upheaval for some people in areas of risk. The fire began to take hold on Thursday. Authorities were initially worried as flames moved toward property owned by an explosives company, but the focus turned yesterday to saving homes as winds kicked up and the fire moved toward Saratoga Springs. On Friday, fire officials were calling in additional aircraft and extra ground crews.

About Us We are a non-profit organization with a mission to connect people through lending to alleviate poverty. Leveraging the internet and a worldwide network of microfinance institutions, Kiva lets individuals lend as little as $25 to help create opportunity around the world. Learn more about how it works. Since Kiva was founded in 2005: 1,299,199 Kiva lenders $714,627,450in loans 98.72% repayment rate We work with: The world's oldest clove tree 23 June 2012Last updated at 10:51 GMT By Simon Worrall Ternate, Indonesia Indonesia's "Spice Islands" produced more nutmeg, mace, pepper and cloves than anywhere else in the world and on the island of Ternate, one particular tree has an extraordinary history. "Bule, Bule," shout the children excitedly, as our jeep threads its way up a steep road on the side of the volcano.

Co-Existence To put it to you plainly and not beat around the bush, I have always expected myself to do something GREAT. Something BIG. Actually about doing a lot of GREAT and BIG things. Microhydro energy: reinventing the wheel Dreifa Mills sits in a Welsh valley near Cwm Morgan, hidden up a narrow lane where the faint rush of river mingles with the rustle of foliage. So ensconced is the mill in the landscape that when owner Mike Godsell first saw it in 1978, it looked as if it was being eaten by woodland. Green moss crept over the red bricks and branches spread across the roof, while the 20ft water wheel stood motionless, like a stopped clock.