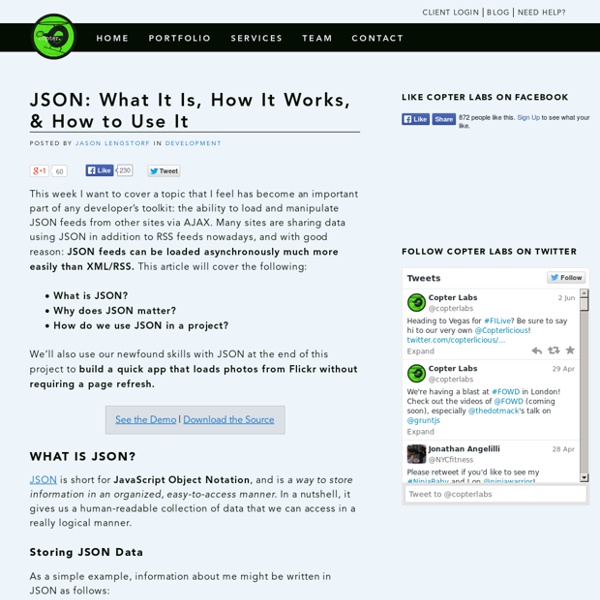 This week I want to cover a topic that I feel has become an important part of any developer’s toolkit: the ability to load and manipulate JSON feeds from other sites via AJAX. Many sites are sharing data using JSON in addition to RSS feeds nowadays, and with good reason: JSON feeds can be loaded asynchronously much more easily than XML/RSS. This article will cover the following: What is JSON? We’ll also use our newfound skills with JSON at the end of this project to build a quick app that loads photos from Flickr without requiring a page refresh. What Is JSON? JSON is short for JavaScript Object Notation, and is a way to store information in an organized, easy-to-access manner. Storing JSON Data As a simple example, information about me might be written in JSON as follows: This creates an object that we access using the variable jason. Storing JSON Data in Arrays Summary

The Clean Architecture Over the last several years we’ve seen a whole range of ideas regarding the architecture of systems. These include: Hexagonal Architecture (a.k.a. Ports and Adapters) by Alistair Cockburn and adopted by Steve Freeman, and Nat Pryce in their wonderful book Growing Object Oriented Software Onion Architecture by Jeffrey Palermo Screaming Architecture from a blog of mine last year DCI from James Coplien, and Trygve Reenskaug. Though these architectures all vary somewhat in their details, they are very similar. Each of these architectures produce systems that are: Independent of Frameworks. The diagram at the top of this article is an attempt at integrating all these architectures into a single actionable idea. The Dependency Rule The concentric circles represent different areas of software. The overriding rule that makes this architecture work is The Dependency Rule. Entities Entities encapsulate Enterprise wide business rules. Use Cases Interface Adapters Frameworks and Drivers. Conclusion

jQuery Enlightenment | by Cody Lindley | 1st Edition | based on jQuery 1.3.2 Architecture Patterns Introduction | US Treasury Architecture Development Guidance (TADG) | IBM Patterns for e-Business | Some Pattern Resources This chapter provides guidelines for using architecture patterns. Introduction Patterns for system architecting are very much in their infancy. They have been introduced into TOGAF essentially to draw them to the attention of the systems architecture community as an emerging important resource, and as a placeholder for hopefully more rigorous descriptions and references to more plentiful resources in future versions of TOGAF. They have not (as yet) been integrated into TOGAF. Background A "pattern" has been defined as: "an idea that has been useful in one practical context and will probably be useful in others" [Analysis Patterns - Reusable Object Models]. In TOGAF, patterns are considered to be a way of putting building blocks into context; for example, to describe a re-usable solution to a problem. Content of a Pattern Name Problem Context Forces Solution Resulting Context

Python to Javascript translation I'm currently doing a project with a backend in Python and a client mostly in Javascript -- still not public, but if everything turns out right I'll post about it later on -- and there are some algorithms I'd like to reuse in both, but without going to a full Python in browser style (such as Pyjs or brython)... Ideally I'd like something like Coffescript (but with a Python-like syntax so that a subset of Python can be used for both Python and Javascript generation). -- Sidenote: I decided I really have to grasp Javascript in order to find out how things work before trying an alternative language which compiles down to Javascript -- so far my experience has been nice.

60+ .NET libraries every developer should know about. Every good developer knows never to re-invent the wheel, especially if there is software out there that has been tested by others, and has an established track record. As a developer using the .NET framework I’ve found some of these libraries invaluable, so I’m sharing them for some of the other dev’s out there with a brief outline of how to use. Yedda Twitter Library. URL: I’ve used this on a number of very simple twitter projects, where I’ve just needed to send an update. Dim objYedda As New Yedda.TwitterDim status as StringDim strTwitterUser as String = “username”Dim strTwitterPassword as String = “password”status = “Hello World”objYedda.Update(strTwitterUser, strTwitterPassword, strStatus, Yedda.Twitter.OutputFormatType.RSS) This small section of code will update your Twitter stream (provided you have a reference to the DLL), and your username and password correct. FileHelpers Library URL: Elmah Ajax

VI tutorial for beginners Overview and main commands There are so many text editors on *nix systems, but VI is surely the most widespread. VI stands for VIsual editor and VIM is an improved version of VI. You can find VI in any Linux distribution, in Unix and Mac Os X systems. 1) command mode 2) row editing mode 3) input mode To run VI, open a Terminal window and type 'vi something'. 1) vi myfile (you are creating the myfile file) 2) press 'a' to enter input mode and type 'this is a simple text file' 3) now press ':' to enter row editing mode and type 'w!' You can move from input mode to command mode or from row editing mode to command mode by pressing the Esc key. Main command mode commands Main row editing mode commands :w -> write the file :w myfile -> write the file as 'myfile' :q -> quit the file :wq -> write and quit the file :q! (Page 1 of 1) Index DISCLAIMER: Any named products on this website are copyright © and/or trademarks ® of their respective companies.