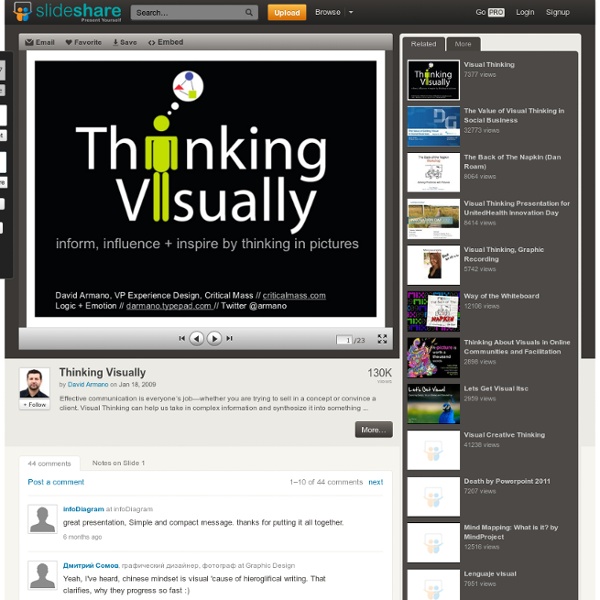 Visual Thinking + Synthesis Photo by Ken Yeung I really enjoy talking complex subjects, processes or business problems and boiling them down to their core essence. This is becoming known as the process of "Visual Thinking". I use visual metaphors and storytelling to do this. My style of visual thinking is immediately recognizable and has helped me build a strong following of influential professionals who use my visuals in their own presentations and documents.

WHAT is it? Visual thinking, also called visual/spatial learning, picture thinking, or right brained learning, is the phenomenon of thinking through visual processing. Visual thinking has been described as seeing words as a series of pictures.[citation needed] It is common in approximately 60%–65% of the general population. "Real picture thinkers", those persons who use visual thinking almost to the exclusion of other kinds of thinking, make up a smaller percentage of the population. Research and theoretical background[edit] In the Netherlands there is a strong and growing interest in the phenomenon of 'true' "picture thinking", or "beelddenken". Non-verbal thought[edit] Thinking in mental images is one of a number of other recognized forms of non-verbal thought, such as kinesthetic, musical and mathematical thinking. Linguistics[edit] A common assumption is that people think in language, and that language and thought influence each other. Multiple intelligences[edit] Split-brain research[edit] Autism[edit]

Self Improvement through Self-Knowledge Self-knowledge is the key to better living. With a grounded sense of Self, you know who you are, where you want to go and what you want to do with your life. Equipped with self knowledge, you naturally make choices that work for you... When we are disconnected from our true selves, we make all kinds of mistakes in life. What's worse...when we are disconnected from ourselves, we often don't even know it! Self Improvement begins with Self-KnowledgeThere can be no genuine, lasting self improvement without really knowing who you are. In fact, many of us lose our sense of Self by changing to please and impress others in the first place. We want mom and dad to love us more, so we try to be who we think our parents want us to be. These are all ways we might appear to "improve" ourselves, but in fact, we are changing at cost to our true sense of Self. Knowing thyself is a lot about weeding out everything you've taken on that is not really you. Or visit other pages on this website...

Graphical visualization of text similarities in essays in a book | munterbund.de The problem A collection of essays is collated for readers with visualizing graphics. The graphics should both serve as a thematic and structural overview of each text, and pose the essay in question in relation to the other essays in the book. They should be both an abbreviation of the text and the key to decoding the complex issues under discussion. The difficulty in developing appropriate graphics arises from the level of discussion of the key themes. In some cases the relation between essays is apparent, a few of the essays have close thematic links. The basis of visualization Detail view of graphic for Raphael Perret A data graphic – like a bar chart – depicts quantifiable data. Different ways of data selection A significant constraint in developing appropriate graphics arises from the manner of data collection. Keywords Keywords are terms that identify an essay in a special way or that have increased significance for it. Metadata Early stages in the process to the final result

Mind Maps and Mind Mapping The human brain is very different from a computer. Whereas a computer works in a linear fashion, the brain works associatively as well as linearly - comparing, integrating and synthesizing as it goes.Association plays a dominant role in nearly every mental function, and words themselves are no exception. Every single word, and idea has numerous links attaching it to other ideas and concepts. Mind Maps™, developed by Tony Buzan are an effective method of note-taking and useful for the generation of ideas by associations. Organization Key Words Association Clustering Visual Memory - Print the key words, use color, symbols, icons, 3D-effects,arrows and outlining groups of words Outstandingness - every Mind Map needs a unique center Conscious involvement Mind Maps are beginning to take on the same structure as memory itself. Because of the large amount of association involved, they can be very creative, tending to generate new ideas and associations that have not been thought of before.

Aura Meditation Aura meditation develops your awareness of energy. As you progress, you can gain deeper self-awareness, release major personal blocks, and connect with higher spiritual dimensions. Aura meditation works with tools such as centering, grounding, the aura, chakras, energy channels, emotions and many more. It ideally compliments energy-based spiritual healing and psychic reading. Grounding Grounding is the energy connection between your body and the center of the planet. Centering Centering is being present and aware from the center of your head. The Aura Your aura is the electromagnetic field of energy surrounding your body. Preparing the Space, Preparing Yourself... Notice how you experience yourself before doing the aura meditation exercise. Aura Meditation... Now notice where the very center of your head would be. Begin to open up your awareness of the field of energy around your physical body. Be right in the center of your head. Or visit other pages on this website...

10 Body Language Techniques to Make You Succeed in Business Every good businessperson knows that what you say has never been as important as how you say it. Even when you are not speaking, you are still communicating, even if you are not aware of it. By becoming aware of your body language and what you are saying with it, you can begin to control it and put forward the impression that will most help you in your business. By using these techniques you will save yourself time – and ensure that you succeed. 10. Meeting someone’s eyes has long been seen as a mark of honesty and good faith. 9. Hunching your shoulders forward or holding your arms in across your chest can make you seem defensive and intimidated. 8. Entire books have been written about the importance of a good handshake. 7. Looking upwards or to the side before you speak or as you’re speaking can make people suspicious of your integrity. 6. When you have established a position in the room, consider it to be your territory. 5. 4. 3. 2. 1. More Popular Stories:

Visual thinking guides - Wikit This presents nine sources of visual thinking guides: Exploratree, Gamestorming, LexIcon, Education Oasis, TeacherVision, Freeology, Education Place and Writing Fun. Exploratree hosts a set of interactive thinking guides. This is a free web resource where you can use the guides, print them, edit them or make your own. You can share them and work on them in groups. It is aimed at schools and students, but has ideas for thinkers of all ages. Interactive map: Flash (recommended) PDF (problem?) Here are some of the overall categories, names of individual diagram type and an indication of their purposes. Click the thumbnail to see a full-size image. Develop ideas Solve problems Explore Analyse Different perspectives Gamestorming presents thinking patterns as games, many of them visual, that will help to make meetings and discussions more fruitful and stimulating. $ - $100 Test 3 - 3-12-3 Brainstorm 4 - 4Cs 7 - 7Ps Framework A - Affinity Map; Air Time Mastermind; Argument map; Atomize R - Random Inputs

Mind map Diagram to visually organize information A mind map is a diagram used to visually organize information into a hierarchy, showing relationships among pieces of the whole.[1] It is often created around a single concept, drawn as an image in the center of a blank page, to which associated representations of ideas such as images, words and parts of words are added. Major ideas are connected directly to the central concept, and other ideas branch out from those major ideas. Mind maps can also be drawn by hand, either as "notes" during a lecture, meeting or planning session, for example, or as higher quality pictures when more time is available. Mind maps are considered to be a type of spider diagram.[2] A similar concept in the 1970s was "idea sun bursting".[3] Origins[edit] The semantic network was developed in the late 1950s as a theory to understand human learning and developed further by Allan M. Popularization[edit] Differences from other visualizations[edit] Research[edit] Features[edit]