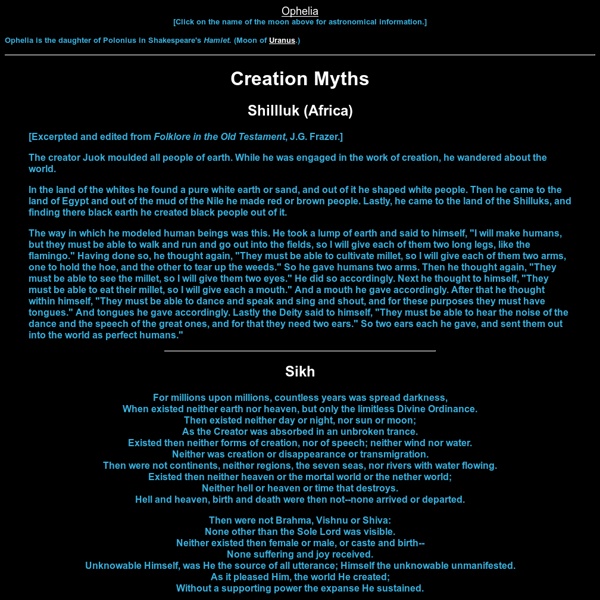 Shillluk (Africa) [Excerpted and edited from Folklore in the Old Testament, J.G. Frazer.] The creator Juok moulded all people of earth. While he was engaged in the work of creation, he wandered about the world. In the land of the whites he found a pure white earth or sand, and out of it he shaped white people. The way in which he modeled human beings was this. Sikh For millions upon millions, countless years was spread darkness, When existed neither earth nor heaven, but only the limitless Divine Ordinance. Then were not Brahma, Vishnu or Shiva: None other than the Sole Lord was visible. Brahma, Vishnu, and Shiva He created and to maya-attachment gave increase. The Creator fashioned the Nine Abodes [of sensation]; In the Tenth [the superconscious mind] is lodged the Lord, unknowable, limitless. Tahitian He was. Vodun Damballah (Sky-serpent loa and wise and loving Father archetype) created all the waters of the earth. [From Vodun Creation Mythology (Site is currently inoperative.)] Yokut Related:  Creation Myths + Related • Misc about Myths & Deities - Myths or Fables

Night of Pan Within the system of Thelema, the Night of Pan, or N.O.X., is a mystical state in the process of spiritual attainment. The City of the Pyramids[edit] In writings by Crowley[edit] Aleister Crowley identifies this process as one of Love. It is also described in the mystical text Liber VII: Ascend in the flame of the pyre, O my soul! When Thou shall know me, O empty God, my flame shall utterly expire in Thy great N. —Liber Liberi vel Lapdis Lazuli, I:39-40 O! PAN: Duality: Energy: Death. Death: Begetting: the supporters of O! To beget is to die; to die is to beget. Cast the Seed into the Field of Night. Life and Death are two names of A. Kill thyself. Neither of these alone is enough. In his commentary on this writing, Crowley explains: It is explained that this triad lives in Night, the Night of Pan, which is mystically called N.O.X., and this O is identified with the O in this word. See also[edit] References[edit] Thelemapedia. (2004).

Moving Multisite to a New Domain (Without Errors!) - WPMU DEV If the physical location of your Multisite suits you fine and you don’t need to switch servers – just your domain – then this handy guide is for you. Moving the domain of your Multisite network isn’t as straightforward as moving a single install, but it’s still possible to make the switch. The process isn’t yet fully automated so you’ll need to edit your database and files, but you can use plugins to significantly speed up the process. Moving your Multisite’s domain doesn’t have to be a difficult. Basic Housekeeping Before we begin, backup your entire site. There are many tools that can help you do this such as our Snapshot plugin, VaultPress, or manually via FTP. Quick File Edits Locate your wp-config.php file in the base of your install and find the following snippet of code: Not too far above that line, you’ll find the following code. Below this code, add the following two lines, and be sure to replace your-new-domain.com with the actual domain you wish to use. Edit Your Datatbase

Sumerian Myths Sumerian civilization originated in what is now southern Iraq, just upriver from the mouths of the Tigris and Euphrates rivers. "Civilization" in this context means a settled town or city-dwelling people who possess a stable agricultural technology (including domesticated animals) and have developed a hierarchical system of social classes (peasants, laborers, slaves, craftsmen [smiths, masons, carpenters, potters, etc.], farmers, fishermen, merchants, doctors, architects, priests and temple attendants, bureaucrats, scribes, advisers, priest-kings). Since the climate of southern Iraq is hot and dry, agriculture requires an extensive irrigation system of canals and dikes. Often, the Sumerians wrote as if their civilization (agricultural techniques, cities, classes of people) came first, and people later. (Why do you think they thought this way?) Map of Mesopotamian Archeological Sites (Oriental Institute, University of Chicago) The Creation of Humans Sumerian Creation Questions1. 2. 3. 4.

Epic of Creation (Mesopotamia) | Thematic Essay Stories describing creation are prominent in many cultures of the world. In Mesopotamia, the surviving evidence from the third millennium to the end of the first millennium B.C. indicates that although many of the gods were associated with natural forces, no single myth addressed issues of initial creation. It was simply assumed that the gods existed before the world was formed. Unfortunately, very little survives of Sumerian literature from the third millennium B.C. Several fragmentary tablets contain references to a time before the pantheon of the gods, when only the Earth (Sumerian: ki) and Heavens (Sumerian: an) existed. All was dark, there existed neither sunlight nor moonlight; however, the earth was green and water was in the ground, although there was no vegetation. A Sumerian myth known today as "Gilgamesh and the Netherworld" opens with a mythological prologue. The origins of humans are described in another early second-millennium Sumerian poem, "The Song of the Hoe."

100 Best iPhone Apps for Serious Self-Learners Those who constantly strive to learn more from the world around them, who can’t pass up an opportunity to pour over a book or dictionary, or who take classes just to learn a bit more are a special breed. For those with an iPhone, the chances for learning just got a lot greater. Whether you are studying literature, science, or arts, there are apps that will enhance your ability to expand your knowledge base. Literature While the number of books and study guides available for your iPhone are just too numerous to list, the following apps offer fun and educational opportunities for those who love literature and want to learn more. Daily Haiku. Arts The following apps range from learning about famous paintings by the masters to creating art through a variety of media. Art. Foreign Languages Whether you are planning to travel to Chinatown in San Francisco, California or just love learning languages, these apps will help you learn to speak whatever language your heart desires. Travel Science iAmino.