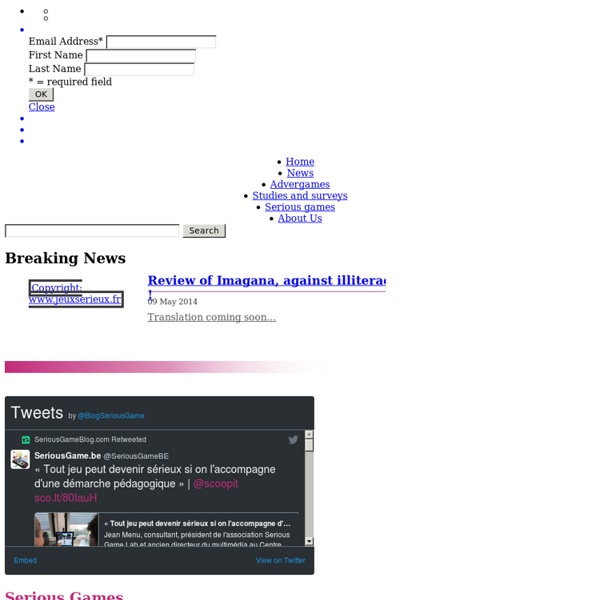 Motivational Theories and Design This page was originally authored by Diana Bang (2011). This page was added to by Marijke Henschel (February 2013) This page is being edited by Christopher Ward (January-April 2014) Motivation is the force that drives one to act[1]. It involves biological, cognitive, emotional, and/or social factors within a human being or animal that arouse and direct goal-oriented behaviour [2]. Maps with Leaflet, TopoJSON and Chroma.js In this post I will show you how to create a world map with random colored countries following these steps: Convert GeoJSON to TopoJSON Add TopoJSON support to Leaflet Display and style country polygons Use Chromajs to get proper colors DEMOSource In the last year I created a lot of map applications with Leaflet. It's nice to work with Leaflet, because it is very well documented, works great on mobile devices and handles many user actions like zooming or panning for you.

Towards Reproducible Descriptions of Neuronal Network Models Introduction Science advances human knowledge through learned discourse based on mutual criticism of ideas and observations. This discourse depends on the unambiguous specification of hypotheses and experimental procedures—otherwise any criticism could be diverted easily. Moreover, communication among scientists will be effective only if a publication evokes in a reader the same ideas as the author had in mind upon writing [1]. Scientific disciplines have over time developed a range of abstract notations, specific terminologies and common practices for describing methods and results.

20 Resources for Teaching Kids How to Program & Code Isn't it amazing to see a baby or a toddler handle a tablet or a smart phone? They know how technology works. Kids absorb information so fast, languages (spoken or coded) can be learned in a matter of months. Recently there has been a surge of articles and studies emerging about teaching kids to code. Rhizomatic Learning - The community is the curriculum Doing this course I've put together a blog post to give you a sense of 'where' the course is happening and what you might like to do as part of it. READ THIS FIRST = Your unguided tour of Rhizo14 Why might this course be for you?

Top-Down: A New Approach to the Semantic Web Earlier this week we wrote about the classic approach to the semantic web and the difficulties with that approach. While the original vision of the layer on top of the current web, which annotates information in a way that is "understandable" by computers, is compelling; there are technical, scientific and business issues that have been difficult to address. One of the technical difficulties that we outlined was the bottom-up nature of the classic semantic web approach. Specifically, each web site needs to annotate information in RDF, OWL, etc. in order for computers to be able to "understand" it. As things stand today, there is little reason for web site owners to do that. The tools that would leverage the annotated information do not exist and there has not been any clearly articulated business and consumer value.

Semantic Web Patterns: A Guide to Semantic Technologies In this article, we'll analyze the trends and technologies that power the Semantic Web. We'll identify patterns that are beginning to emerge, classify the different trends, and peak into what the future holds. In a recent interview Tim Berners-Lee pointed out that the infrastructure to power the Semantic Web is already here. ReadWriteWeb's founder, Richard MacManus, even picked it to be the number one trend in 2008. And rightly so. Copycat (software) Copycat is a model of analogy making and human cognition based on the concept of the parallel terraced scan, developed in 1988 by Douglas Hofstadter, Melanie Mitchell, and others at the Center for Research on Concepts and Cognition, Indiana University Bloomington. The original Copycat was written in Common Lisp and is bitrotten (as it relies on now-outdated graphics libraries); however, a Java port exists. Copycat produces answers to such problems as "abc is to abd as ijk is to what?"

Fluid Concepts and Creative Analogies Fluid Concepts and Creative Analogies: Computer Models of the Fundamental Mechanisms of Thought is a 1995 book by Douglas Hofstadter and other members of the Fluid Analogies Research Group exploring the mechanisms of intelligence through computer modeling. It contends that the notions of analogy and fluidity are fundamental to explain how the human mind solves problems and to create computer programs that show intelligent behavior. It analyzes several computer programs that members of the group have created over the years to solve problems that require intelligence.

Why your brand should get creative now with visual content marketing According to Toprank CEO Lee Odden’s recent SES London session, content marketing at its very minimum needs to include: brand leadership, customer empathy, storytelling and creativity. Here are three reasons why some of that creativity should be visual, regardless of your brand or industry. Dedicated Vine analytics tools Since Vine launched last month, we’ve been having a blast contemplating the ramifications for marketers as well as making our own Vines. Now a social analytics company called Simply Measured has released a tool that marketers can use to track how many people have seen their Vines. With a nod in design to many of the social infographics you run across on the web these days, the dashboard shows the amount of posts/Vines you have made, and their performance.