A Robot That Balances on a Ball 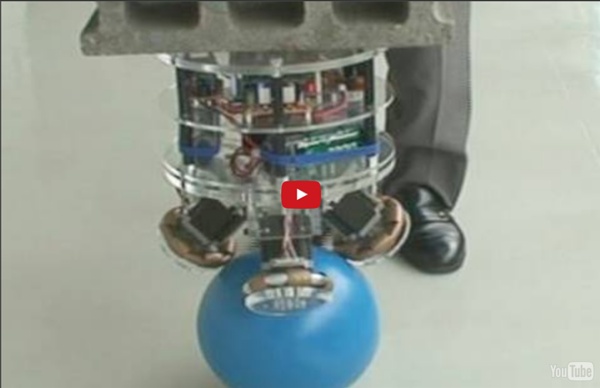 This robot will help clean up the radiation-filled Fukushima power plant Japan is just getting started on tearing down its wrecked Fukushima Dai-Ichi nuclear power plant — a process that's expected to take 30 to 40 years, according to the plant's manager. Next year, it's going to tackle the decommissioning of reactor 3, which was damaged by a hydrogen explosion during the plant's meltdown in 2011. The only problem? Reactor 3 is currently filled with radiation that would be dangerous for any humans who walked inside. So rather than send in people for cleanup duty, Toshiba, the original builder of reactor 3, has created a robot to do the job instead. On Monday, Toshiba unveiled the large remote-controlled machine, which boasts two crane-like arms that will remove bundles of fuel rods from the cooling pool inside reactor 3. The Fukushima meltdown is considered the worst nuclear disaster since the 1986 Chernobyl explosion. SourceJapan Times

Access Any Website Or Forum Without Registering Visit any forum or website to find something useful and they will ask you to register. Every time a forum asks me to register, I simply close the site. You would probably do the same. But this time, lets face it. Before I begin, you should know how things work. First grab the add-on for Firefox called ‘user agent’ here and install it. Select User Agent from the left sidebar and click Add. crawl-66-249-66-1.googlebot.com and in user agent field type: Googlebot/2.1 (+ as shown in the screenshot below. Select Google Bot as your User Script by going to Tools > User Agent Switcher. Now browse any website or forum without registering. Advertisement

Mini RC Car - Part 5 (final) After weeks of 'other things', here is the 5th and final post on the Mini RC Car project. It's alive!!! This final configuration works on a single 9v battery. Yes only one power supply because I found the real source of the noise problem coming from the DC motor. Like any good bug it was a code 12 since I assumed that the motor had a capacitor on it... NOT! Parts: 1x racetrack toy car 1x micro servo 1x 9v battery 1x 5v power regulator 1x pn2222 transistor 1x 1N4001 rectifier diode 4x ceramic 0.1uf capacitors 1x 16MHz crystal 1x 28 pin socket 1x 4 pins female headers 1x 3 pins male headers 1 9v snap connector 1 Atmega328 1 BlueSmirf bluetooth breakout board 1 PCB 1 Wires scrap metal/wood for structure Tools: Dremel Soldering iron Hot glue gun Arduino board (e.g. Android device with bluetooth For the maniacs out there I'll probably add this on Instructables where I'll go over all the geeky details. To view the whole project go here. Thanks for reading.

The Robopocalypse Cometh: IBM's Cyberbrain Smart as a Cat, Getting Smarter If the Matrix or I, Robot's view of artificial intelligence sent chilly shivers down your spine, then prepare for frostbite: IBM's artificial brain is now as smart as a cat--just a stop or two down the line from human powers. Speaking at the SC09 high-performance computing conference this week, IBM representatives from the cognitive computing team will be unveiling all the technical details behind their successes with large-scale cortical simulation and brain-like emulation. But it boils down quite neatly to news that the team has, for the first time, performed an in-computer simulation of a brain's workings at a near-instantaneous speed. The magic is all done in software, with particularly clever program elements that emulate the biochemical and electrical activity of neurons and synapses in real flesh-and-blood brains. Which is where the other bit of IBM's research comes in. [Via VentureBeat]

Motion-planning algorithms allow drones to make hairpin turns in a simulated “forest” Getting drones to fly around without hitting things is no small task. Obstacle-detection and motion-planning are two of computer science’s trickiest challenges, because of the complexity involved in creating real-time flight plans that avoid obstacles and handle surprises like wind and weather. In a pair of projects announced this week, researchers from MIT’s Computer Science and Artificial Intelligence Laboratory (CSAIL) demonstrated software that allow drones to stop on a dime to make hairpin movements over, under, and around some 26 distinct obstacles in a simulated “forest.” One team’s video shows a small quadrotor doing donuts and figure-eights through an obstacle course of strings and PVC pipes. The team’s algorithms, which are available online and were previously used to plan footsteps for CSAIL’s Atlas robot at last year's DARPA Robotics Challenge, segment space into “obstacle-free regions” and then link them together to find a single collision-free route. Drones in high-density

CaddyTrek Mobile Autonomous Robotic Golf Cart Caddy (Black) • Mobile Autonomous Robotic Golf Cart Caddy (Black)• Compact and lightweight• Can be remotely controlled• No assembly required• Detects objects autonomously• US Plug The CaddyTrek Mobile Autonomous Robotic Golf Cart Caddy (Black) is a smart and compact robotic golf caddy that carries your bag around the golf course, with a Lithium Ion battery can last 27 holes and beyond. The CaddyTrek follows in wide-open spaces, but offers versatility, allowing the golfer to control the unit in RC mode to send the it on to the next tee or call it back from afar. As the most compact andlightweight caddy in the world, it easily folds and unfolds. When folded, the CaddyTrek only occupies a size of 23 x 18 x 12 making it ideal for storage and travel. A robotic caddy that follows youCaddyTrek uses robotic sensors to follow the user. • Size - Folded: 23 x 18 x 12in - Fully expended: 36 x 34 x 23 in • Weight: 33lb or 15kg (Without battery)

Watch This Massive Drone Launch and Recover Another Drone in Flight We’ve written entire posts on how tricky it can be to recover a fixed-wing drone. Only the ridiculously large and expensive and over-engineered drones are able to land themselves (Predators, Global Hawks, things like that). Most other fixed-wing drones land themselves by crashing into the ground as gently as possible if they’re small and cheap, or maybe using a parachute if they’re slightly less small and cheap. Bigger fixed wing drones have to get more creative, especially if a precision landing is required (like recovery to a ship). Unmanned aircraft system developer Insitu, a Boeing subsidiary based in Bingen, Wash., has developed one of the most creative and awesome drone launch and recovery systems I’ve ever seen, using an enormous octocopter carrier aircraft. This thing is called FLARES, for Flying Launch and Recovery System, and it’s been flying since late 2014, with the first successful launch and recovery taking place this past August. [ Insitu ] via [ theUAVguy ]

Lucid Dreaming By lucid dreaming, you can gain complete control over the one place that no one will ever care about: your imagination. Just The Facts Lucid dreaming is a scientifically proven phenomenon. While some get into lucid dreaming in order to treat chronic nightmares, or to experience all facets of the human experience, approximately 99.8% of people use it as a tool for cheap and interactive 3D porn. A lucid dream is a dream in which the dreamer is aware that he or she is dreaming, and he or she can even choose to control and manipulate his or her dream. How to Take Control of Your Dreams: So, you've doubled your weight over the past five years, you own a record-shattering collection of greasy pizza boxes and broken aspirations, and you're beginning to consider installing a toilet bowl in the place of your computer chair? In order to even begin to get control over your dreams, there are a few preliminary tasks you must complete. The Tasks: 1. "What?" Calm down! 2. Wake Initiated Lucid Dreams:

Watch this golf robot get an epic hole-in-one Yes, this robot is probably better at golf than you are. LDRIC the Golf Robot, as he is known, got a hole-in-one yesterday at the opening round of the Phoenix Open. It’s also the exact same shot that Tiger Woods hit in 1997 before he was the golfing legend he is today. LDRIC stands for ‘Launch Directional Robot Intelligent Circuitry’ and is a nod to Tiger Woods’ first name, which is Eldrick. The robot was created by Golf Laboratories and is normally used to test different technology and gear in the industry. In fact, Golf Laboratories put golfer Rory McIlroy to the test against one of its other robots recently as well. LDRIC is designed to replicate golfers’ swings and all of their faults so club manufacturers can make the clubs to suit each type of player. According to Golf Laboratories, LDRIC’s swing can go from 0.1 mph to 120 mph. ➤ Robot’s hole-in-one brings beer showers to TPC Scottsdale’s 16th hole [Golf Digest]

Firesheep The extension was created as a demonstration of the security risk of session hijacking vulnerabilities to users of web sites that only encrypt the login process and not the cookie(s) created during the login process.[3] It has been warned that the use of the extension to capture login details without permission would violate wiretapping laws and/or computer security laws in some countries. Despite the security threat surrounding Firesheep, representatives for Mozilla Add-ons have stated that it would not use the browser's internal add-on blacklist to disable use of Firesheep, as the blacklist has only been used to disable spyware or add-ons which inadvertently create security vulnerabilities, as opposed to attack tools (which may legitimately be used to test the security of one's own systems).[4] Note that even if they did, it wouldn't actually prevent anyone from using Firesheep, as Firefox contains a hidden setting to disable this blacklist.[5] Countermeasures[edit] HTTPS[edit]

3D Printed V8 Solenoid Engine: Another Intricately Engineered Project from Sgt. Enochs Sergeant Bryan Enochs is at it again. We’ve followed him previously in an endeavor that involved an incredibly intricate 3D printed carousel, made on his two MakerBot Replicator 2 3D printers. Now, he’s fired them up again for another complex project which takes a much different turn from the whimsical world of his last undertaking. With the V8 Solenoid Engine, Sgt. If you are interested in creating this engine yourself, we’ve supplied the list of what you’ll need as supplied by the maker, but as Enochs points out, it is a 3D printing project that’s more on the expensive side, and you’ll need to make a number of trips to different hardware stores to pick up all your parts. Working to improve on where he had problems before, Enochs used larger solenoids for this engine for dispersing heat, and placed cooling fans on each piston. “The particular SENSOFOIL sensor I purchased wasn’t as straightforward as I had hoped. Here is a list of parts you will need, as well as approximate expense: