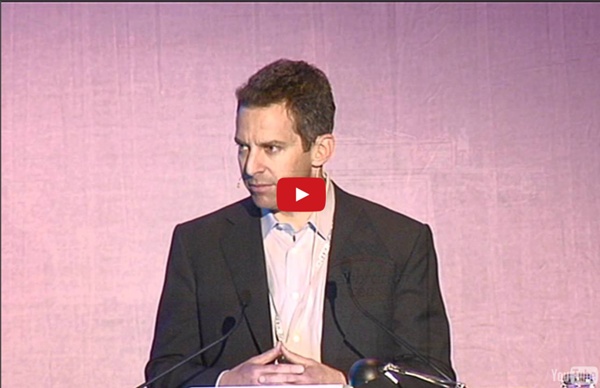 Ayahuasca Ayahuasca (usually pronounced /ˌaɪjəˈwæskə/ or /ˌaɪjəˈwaːskə/), also commonly called yagé (/jaːˈheɪ/), is a psychedelic brew made out of Banisteriopsis caapi vine, often in combination with various other plants. It can be mixed with the leaves of Chacruna or Chacropanga, dimethyltryptamine (DMT)-containing plant species. The brew, first described academically in the early 1950s by Harvard ethnobotanist Richard Evans Schultes, who found it employed for divinatory and healing purposes by the native peoples of Amazonian Peru, is known by a number of different names (see below).[1] It has been reported that some effects can be felt from consuming the caapi vine alone, but that DMT-containing plants (such as Psychotria) remain inactive when drunk as a brew without a source of monoamine oxidase inhibitor (MAOI) such as B. caapi.

The Limits of Discourse : As Demonstrated by Sam Harris and Noam Chomsky (Photo via Axel Naud) For decades, Noam Chomsky has been one of the most prominent critics of U.S. foreign policy, and the further left one travels along the political spectrum, the more one feels his influence. Although I agree with much of what Chomsky has said about the misuses of state power, I have long maintained that his political views, where the threat of global jihadism is concerned, produce dangerous delusions. In response, I have been much criticized by those who believe that I haven’t given the great man his due.

As Social Issues Drive Young From Church, Leaders Try To Keep Them : The Two-Way On Friday, Morning Edition wraps up its weeklong look at the growing number of people who say they do not identify with a religion. The final conversation in the Losing Our Religion series picks up on a theme made clear throughout the week: Young adults are drifting away from organized religion in unprecedented numbers. In Friday's story, NPR's David Greene talks to two religious leaders about the trend and wonders what they tell young people who are disillusioned with the church. According to the Pew Research Center, one-third of Americans under 30 have no religious affiliation.

Wheaton's Law About Wheaton’s Law is an internet axiom which states “Don’t be a dick.” It was originally used in the context of sportsmanship in online gaming but its scope was eventually expanded to apply to life in general. Alvin Plantinga Alvin Carl Plantinga (/ˈplæntɪŋɡə/;[1] born November 15, 1932) is an American analytic philosopher, the John A. O'Brien Professor of Philosophy Emeritus at the University of Notre Dame, and the inaugural holder of the Jellema Chair in Philosophy at Calvin College. Plantinga is widely known for his work in philosophy of religion, epistemology, metaphysics and Christian apologetics. He is the author of numerous books including God and Other Minds (1967), The Nature of Necessity (1974), and a trilogy of books on epistemology, culminating in Warranted Christian Belief (2000). He has delivered the Gifford Lectures three times and was described by TIME magazine as "America's leading orthodox Protestant philosopher of God".

Newtown Tragedy: Would A Good God Allow Such Evil? hide captionPeople gather for a prayer vigil at St. Rose Church in Newtown, Conn., on Dec. 14. In the aftermath of such tragedies, many people ask how a benevolent God and suffering can coexist. Emmanuel Dunand/Getty Images WAKE UP! We are all ONE - Change YOURSELF to change the World Modern science is now beginning to confirm what spirituality, philosophy, sages, ancient teachings and psychedelics have been saying for millennia: the entire Universe is One and what we think of as "reality" is just an illusion; the only real thing in the Universe is Consciousness. “If quantum mechanics hasn't profoundly shocked you, you haven't understood it yet.” -Niels Bohr, Nobel Prize in Physics 1922 “The total number of minds in the universe is one.”

The Gospel Coalition Concerning hell, C. S. Lewis once wrote, “There is no doctrine which I would more willingly remove from Christianity than this, if it lay in my power.” In many ways, I agree with him. Mormonism: A Scrutinized, Yet Evolving Faith hide captionThe historic Mormon Salt Lake Temple in Salt Lake City. George Frey/Landov Mitt Romney refused to mix religion with politics in this year's presidential campaign, but that didn't repress people's curiosity about Mormonism. His candidacy brought the homegrown faith into the spotlight. Dunning–Kruger effect The Dunning–Kruger effect is a cognitive bias in which low-ability individuals suffer from illusory superiority, mistakenly assessing their ability as much higher than it really is. Psychologists David Dunning and Justin Kruger attributed this bias to a metacognitive incapacity, on the part of those with low ability, to recognize their ineptitude and evaluate their competence accurately. Their research also suggests corollaries: high-ability individuals may underestimate their relative competence and may erroneously assume that tasks which are easy for them are also easy for others.[1] Dunning and Kruger have postulated that the effect is the result of internal illusion in those of low ability and external misperception in those of high ability: "The miscalibration of the incompetent stems from an error about the self, whereas the miscalibration of the highly competent stems from an error about others.