What is the theory that underpins our moocs? 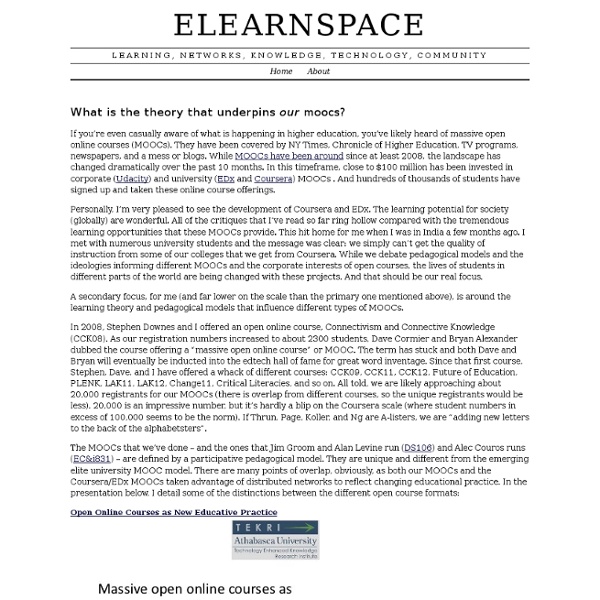 If you’re even casually aware of what is happening in higher education, you’ve likely heard of massive open online courses (MOOCs). They have been covered by NY Times, Chronicle of Higher Education, TV programs, newspapers, and a mess or blogs. While MOOCs have been around since at least 2008, the landscape has changed dramatically over the past 10 months. Personally, I’m very pleased to see the development of Coursera and EDx. A secondary focus, for me (and far lower on the scale than the primary one mentioned above), is around the learning theory and pedagogical models that influence different types of MOOCs. In 2008, Stephen Downes and I offered an open online course, Connectivism and Connective Knowledge (CCK08). The MOOCs that we’ve done – and the ones that Jim Groom and Alan Levine run (DS106) and Alec Couros runs (EC&i831) – are defined by a participative pedagogical model. What is the theory that underpins our MOOCs? 1. 2. 3. 4. 5. 6. 7. 8. Related:  media about

Four Barriers That MOOCs Must Overcome To Build a Sustainable Model Given the hype of national media coverage of massive open online courses (MOOCs), it is refreshing to see more recent analysis looking at important attributes such as revenue models, dropout rates, and instructional design. Steve Kolowich at Inside Higher Ed wrote a revealing and important article looking at early demographic data. Jeff Young at the Chronicle wrote an excellent article about Coursera’s contract with the University of Michigan, along with key insights into Coursera’s and the university’s motivations. When analyzing the disruption potential of MOOCs, it is easy to forget that the actual concept is just 4 or 5 years old. While the current examples of massive online courses are interesting, the real potential of MOOCs will be revealed in future generations. The two current branches of MOOCs are different and will not merge – despite the common name, they have different aims and methods. Update 8/15: Added CC license and DI logo to image to facilitate sharing

Are MOOCs becoming mechanisms for international competition in global higher ed? Link here for the Inside Higher Ed version of this article if you need a better format for printing or sharing (e.g., via Twitter). Are Massive Open Online Courses (MOOCs) becoming mechanisms for international competition in global higher education? Where are Europe’s MOOCs in the context of the dearth of lifelong learning opportunities in the region, or both the internal and external/global dimensions of the European Higher Education Area? Who will establish the first MOOCs platform that spans the Arabic-speaking world? Are the MOOCs born in the United States (circa 2012) poised to become post-national platforms of higher ed given their cosmopolitan multilingual architects? I couldn’t help but think about some of these questions when England’s Open University (est. 1969) announced last Thursday that it was going to establish a MOOCs platform that will be known as Futurelearn. The UK must be at the forefront of developments in education technology. Udacity (est. Coursera (est. Kris Olds

Higher education: our MP3 is the mooc Fifteen years ago, a research group called The Fraunhofer Institute announced a new digital format for compressing movie files. This wasn't a terribly momentous invention, but it did have one interesting side-effect: Fraunhofer also had to figure out how to compress the soundtrack. The result was the Motion Picture Experts Group Format 1, Audio Layer III, a format you know and love, though only by its acronym, MP3. The recording industry concluded this new format would be no threat, because quality mattered most. If Napster had only been about free access, control of legal distribution of music would then have returned the record labels. How did the recording industry win the battle but lose the war? The story the recording industry used to tell us went like this: "Hey kids, Alanis Morissette just recorded three kickin' songs! The people in the music industry weren't stupid, of course. We have several advantages over the recording industry, of course. But who faces that choice?

Clay Shirky is our MP3 Dear Clay, Please stop being wrong about the future of Higher Education. It’s embarrassing, and it is damaging to those of us who actually work in the field and care about it. But first up, could you stop being wrong about the record industry. The recording industry has singularly failed to die as a result of the mp3. One of the reasons for this *was* a by-product of Napster. What Napster meant was I could search for the rare music I wanted to hear and have a real expectation of being able to hear it. Mp3s cost much less to produce than CDs or records, so it was much easier to keep all the old music around. And of course, there is a load of things you *can’t* do with new formats. And then there is stuff like Spotify and YouTube. So the impact of the “disruptive” Napster was that the recording industry was able to sell more music to us, and a greater variety of music, at a lower cost to them. Maybe cancel the flowers? The last great hurrah of the baby boom. Thanks for that. David (Un)related

The False Promise of the Education Revolution - College, Reinvented By Scott Carlson and Goldie Blumenstyk Last year, leading lights in for-profit and nonprofit higher education convened in Washington for a conference on private-sector innovation in the industry. The national conversation about dysfunction and disruption in higher education was just heating up, and panelists from start-ups, banking, government, and education waxed enthusiastic about the ways that a traditional college education could be torn down and rebuilt—and about how lots of money could be made along the way. During a break, one panelist—a banker who lines up financing for education companies, and who had talked about meeting consumer demands in the market—made chitchat. The banker had a daughter who wanted a master's in education and was deciding between a traditional college and a start-up that offered a program she would attend mostly online—exactly the kind of thing everyone at the conference was touting. Read beneath the headlines a bit. A 'Mass Psychosis' Unfortunately, Mr.

timeline2012 MOOC's Part 5 of my Top Ed-Tech Trends of 2012 series The Year of the MOOC Massive Open Online Courses. MOOCs. And oh man, did we talk about it. In retrospect, it’s not surprising that 2012 was dominated by MOOCs as the trend started to really pick up in late 2011 with the huge enrollment in the three computer science courses that Stanford offered for free online during the Fall semester, along with the announcement of MITx in December. Who cares what Cormier thinks and predicts? January: Googler and Stanford professor (and professor for the university’s massive AI class) Sebastian Thrun announces he’s leaving Stanford to launch Udacity, his own online learning startup. February: MITx opens for enrollment. April: Stanford professors Andrew Ng and Daphne Koller (also involved with Stanford’s fall 2011 MOOCs) officially launch their online learning startup Coursera. May: June: Udacity announces it’s partnering with Pearson, which will offer onsite testing for its classes. July: August: September:

evgenymorozov : God, this Shirky-trashing is... Making Sense of MOOCs: Musings in a Maze of Myth, Paradox and Possibility | Sir John Daniel | ed tech snippets & other stuff This could be huge... Moocs are already big - in reach and in hype - and are predicted to explode. Zoë Corbyn checks in to learn if they are more than just a novelty and to find out what it’s like to teach a class of 38,000 Kristin Sainani, clinical assistant professor in health policy at Stanford University, has just finished teaching her most popular course ever. But its popularity was far beyond the scale of a class of several hundred students, with seminar rooms and lecture theatres bursting at the seams. Over eight weeks, the students took part via short online video lectures, discussion forums, automated quizzes and assignments graded by peers. Sainani’s programme was a Mooc, a massive open online course, a new beast in the academy that has risen rapidly in prominence, attracting considerable hype and media coverage. So what attracts academics to experiment with the model? Second, creating a Mooc would help her to “flip the classroom” in her traditional teaching on campus.