Looking to create a social media or BYOD policy? Look no further. 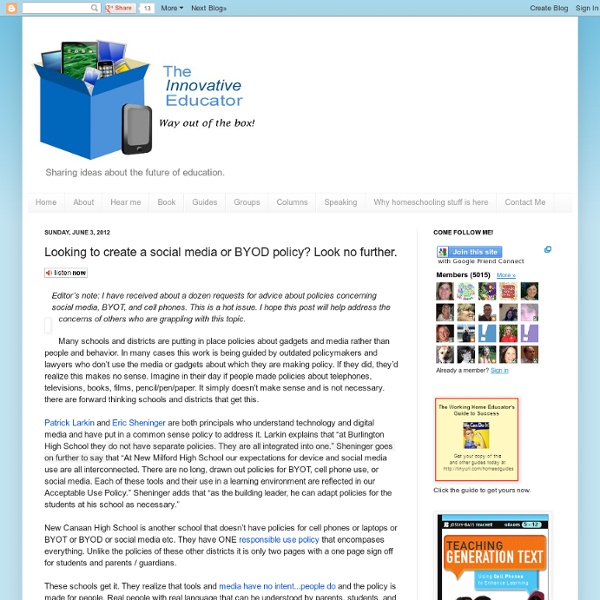 Are You Ready for BYOD? Infrastructure | In Print Are You Ready for BYOD? The do's and don'ts of beefing up your wireless network to handle the bring-your-own-device movement. When students and staff returned to school in the Jordan School District (UT) after the 2011 Christmas break, Ron Bird could see that the number of devices on the wireless network had jumped by several hundred compared to pre-vacation levels. "I figured that was just whatever Mom and Dad bought kids for Christmas," says Bird, the district's network and technical services manager. Nevertheless, Bird and his colleagues felt like they were prepared. Bird's experience in Jordan comes as no surprise to Philip Wegner, president of SecurEdge Networks in Charlotte, NC, which specializes in developing wireless networks for the K-12 sector. Many districts around the country face the same issues Jordan did as they launch their own BYOD initiatives. T.H.E. Little by Little Hanover Public School District, Hanover, PADavid Fry, technology coordinator

Forum: It’s Personal – Personalized Learning for Students and Educators Key Questions Right Now: What practical steps can educators take to personalize learning for their students in 2012–13, and how can technology facilitate this? The Big Picture: How close are we to being able to realize the dream of personalized, differentiated, passion-based learning for educators and students, and what still has to happen to make this fully real? Getting Started Video: Watch the Forum Users Guide for a tutorial on how to get started. Notice: Forums have been archived! If you would like a copy of the Forum Archive please contact us..

One-to-One or BYOD? Districts Explain Thinking Behind Student Computing Initiatives Edina Public Schools had concerns about the economic feasibility of one-to-one computing over the long term, so the nine-school Minnesota district is pursuing what it considers to be the next best alternative: allowing ­students to bring their own mobile devices to school. Two years ago, Edina considered providing middle and high school students with notebook computers as part of a strategy to increase engagement, personalize learning, teach 21st century skills and take education beyond the classroom. After running a one-to-one pilot, the district shelved the idea when it became apparent that students preferred using their personal mobile devices and that the cost of buying and ­refreshing ­notebooks every three to four years would be ­prohibitive. (For more on the district's early one-to-one efforts, visit ­edtechmag.com/k12/Edina1to1.) "Right now, what's driving the BYOD movement is a clear move toward digital content as opposed to print content," Rust explains. Steps to Implementation

Trustees Recently we presented an in-service to the Board of Education on The Digital Foundations of Teaching and Learning: Preparing for a Future that is Here Today. An abbreviated slideshare is included below. We also showed some fabulous video clips but we will save those for another post. The presentation was anchored in a metaphor and image of fire. “Technology IS just a tool, like a stick. In Surrey, we are using technology to TRANSFORM teaching and learning. We identified the Shifts that are Impacting Education globally, some of which include: 1. These trends are shaping the transformation of how we teach and how students learn. The BC Ministry of Education describes it as “Learning Empowered by Technology.” The wise use of technology for learning was endorsed in a research paper that examined high performing districts across Canada. So how are we doing that as a district? Here are some of the fire starters we have initiated in the district:

Student Safety in the Age of Facebook Online Safety | In Print Student Safety in the Age of Facebook By Margo Pierce03/02/12 "If one life is saved, then it's worth it." That is the clichéd argument frequently used to justify banning electronic communications, websites, and other forms of technology in schools. But that argument can be turned on its head and also applied to unfettered access. In 2001, the federal Children's Internet Protection Act (CIPA) tied funding for reduced-rate internet access for schools and libraries to a number of mandates. Social media sites like Facebook and Twitter are certainly riding strong waves of popularity at the moment, and already they have caused significant changes in the ways and means by which students and adults communicate with one another. "While social networking is the technology of the moment, it may not be the technology of the moment in two years or five years or a decade," says Keith R. "As long as there's been technology, the concern is, 'How are we protecting kids?'"

CMS rolls out new technology plan Teachers huddled around iPads last week, hoping that by the time school starts Aug. 27, they’ll be half as good at making digital movies as the Washam Elementary fifth-graders whose video report on Lewis and Clark they watched. Digital learning could be the hottest trend in education for the coming school year. In September, almost 4,000 Charlotte-Mecklenburg Schools students will get classroom iPads, while about 20 schools will invite students and teachers to use their own tablets, phones and e-readers. The devices generate the buzz. But in schools around the Charlotte region, the real revolution is the way teachers are using technology to make lessons more creative, challenging, relevant and, yes, fun. “It’s just absolutely crazy what technology can do in the classroom,” said Diane Adams, principal at Providence Spring Elementary in south Charlotte. “It is a very powerful learning strategy,” Adams added, “but we don’t do technology for the sake of technology.” Are textbooks obsolete?

Teacher-Librarians My staff describe it as a “year of wonder.” Sometimes we call it a tsunami and just want to ride the wave without crashing. Other times we refer to it as a fire beginning to flame across the district. We consider it as seeding pockets of innovation we want to take root and spread organically as connected and rooted networks. Innovative Learning Designs (Phase 1)A year ago we announced the 18 schools that were awarded grants as part of the Innovative Learning Designs schools (ILD), Phase 1. The Engaging the Digital Learner SeriesWe realized that as educators we needed to find a way to engage our learners. The Digital Discovery Series This series ran parallel to the one above. Cadres of Digital ChampionsWe created Cadres of Digital Champions (a team of three educators at every school). Core Digital Coaches From the above group, we asked for volunteers that wanted to become a core team of Digital Coaches to provide support to their larger group. How have others viewed these initiatives?

The Innovative Educator tries to change the mind of an administrator who “thinks” he disagrees with my stance on friending students online When George Swain read my Tweet, “Told the mayor on his Facebook page, he was inappropriate for judging teachers who friend students he replied with this: georgeswain @InnovativeEdu Very interesting issue! I think I disagree with you. See my post to your blog. A thoughtful comment indeed. @George Swain, I’d like to know what you perceive as the dangers for an educator open to connecting with students in whichever environment they exist...online or offline. So, George, I’m dying to know.

They’re Coming from the Cloud and They’re There to Help: The New Digital Hall Davidson, Distinguished Lecturer and an amazing tech guru began his presentation by defining terms because they define us. Early “stuff” existed in itself, like floppy disks, CD Roms, flashdrives, a wired network but then progress. Now we can deliver that same information because we have more devices that move around, wirelessly. Wi-Fi and mobile networks changed how we work, so we had to rethink our definition because we have THE CLOUD. Everything goes there now. Think about how Hollywood delivered content just 1 year ago, or how Walmart is advertising their ability to put your digital content in the cloud. Think about carrying your content in a backpack. As we move into the cloud, differentiation and individualization happens. Ever notice people watching their devices. DE's Digital Techbook Discovery Education Techbooks are not just another ebook. Image Cite: Your devices are backpacks, cloud carrying content.