8 Free Resources on The Use of iPad in Education 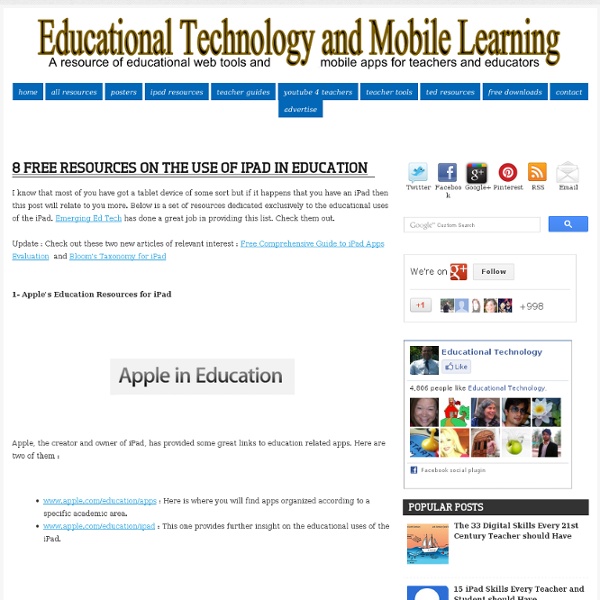 I know that most of you have got a tablet device of some sort but if it happens that you have an iPad then this post will relate to you more. Below is a set of resources dedicated exclusively to the educational uses of the iPad. Emerging Ed Tech has done a great job in providing this list. Check them out. Update : Check out these two new articles of relevant interest : Free Comprehensive Guide to iPad Apps Evaluation and Bloom's Taxonomy for iPad 1- Apple's Education Resources for iPad Apple, the creator and owner of iPad, has provided some great links to education related apps. 2- Apps in Education Blog This is one of my favourite blogs when it comes to looking for iPad apps. 3-iPad Curriculum This is another great website for teachers looking for iPad apps. 4- iPad in Schools This is a resource listing. 5- iPad Educators This is a Ning-based social networl created by Sam Glicksman that provides various resources pertaining to the use of iPad in education. 6- iPads in Education

50 Best iPad Apps for STEM Education Despite early doubts, the iPad has proven to be an incredibly valuable tool for education, both in the classroom and in homes around America. By offering students, from elementary school all the way up to the university level, the chance to do some hands-on learning, exploring, and sometimes even educational gaming, the device makes education fun and exciting, something that isn’t always easy to do. With schools falling behind in math and science education and companies unable to find enough qualified professionals to fill jobs in science and technology fields, pushing STEM education is more important than ever. Educators and parents can help get kids interested and perhaps even hooked on STEM no matter their age with the help of the iPad and the myriad great educational applications it offers. General These applications address STEM more generally or act as amazing tools and reference guides for learning.

How To Setup Parental Controls (Restrictions) on the iPad The iPad is a wonderfully easy and intuitive device to use. This is generally nothing but a major advantage – but at times it can cause issues if you have children who share your iPad or are allowed to use it from time to time. Problems you might encounter range from a child inadvertently deleting a frequently-used app to discovering that your child’s favorite new iPad game has allowed them to rack up hundreds of dollars worth of charges to your credit card via In-App purchases.

10 Useful iPad Resources for Educators Home » Education I thought I would share with you some our most popular iPad resources for educators, all of which I learned about inside the Teacher Learning Community! Effective Mobile Learning: 50+ Quick Tips and Resources "In this e-book find several tips, resources, and links for integrating mobile devices into the curriculum." -ShellTerrell20 Free iPad Apps Educators Can’t Live Without! "There are thousands of free iPad Apps out there, but finding the perfect ones for you can be tough. We’ve spent hours searching for the best-of-the-best, free iPad Apps for Educators, and we’re sharing all of them with you in this eBook! Load Up Your iPad with a Massive Library of Over 38,000 Free eBooks The iPad is a great device to read on, and if your digital library is feeling a little bare then you’ve come to the right place. We’ve found some of the best places to get free ebooks, ready to be downloaded and opened with iBooks on your shiny new iPad (or iPhone, iPod, Kindle, Nook, or Android, for that matter). Project Gutenberg Top 100 – Full of classics, if you’re only going to visit one source for free ebooks, Gutenberg should be it. They have over 38,000 free ebooks available, and their top 100 list is basically a mirror of the Western Canon of literature.

Arguments for the iPad in Education As we continue to explore the possibility of becoming a 1:1 iPad school, I am starting to put together my arguments in favor of this adoption. Here are some of my thoughts so far. I would welcome your feedback on this document!Why 1 to 1?In a digital world where information on a multitude of subjects is both abundant and immediately available, students today must learn to effectively access, analyze, synthesize and integrate this information on a regular basis.

Evernote for Education Android App: I use the desktop version at home and the office, the Android app on my HTC One smartphone, my tablets, web version on my Chromebook. The desktop version sync's all of the data to your computer (good for backup) and you can also export your notes in a variety of formats for backup. You can create new notes via desktop, web, or mobile version. You can also use your camera phone or web cam to take a snapshot and Evernote can even recognize the text in the image. This is very useful for capturing signs, posters, printed memos, and more and then being able to search for text inside the image.

Teachers Guides on The Use of iPad in education iPad is a cool versatile tool that has a huge potential in education. It is widely believed that iPad has started tranforming the face of education and revolutionizng modes of learning. Results coming out of pilot studies on the integration of iPads in the classroom seem to be promising. Reed College, for instance, took the Apple iPad for a spin in 2010 and was pleased with the tablets performance as an educational tool. As part of a pilot program, Roslyn High School on Long Island handed out 47 iPads on Dec and the school district hopes to provide iPads eventually to all 1.100 of its students. Another report shows that hundreds of middle school students in the central San Joaquin Valley, Calif, are using curriculum apps for their classwork and homework.

50 really useful iPad 2 tips and tricks An absolute gem of an article by John Brandon and Graham Barlow from MacLife on 30th March over at TechRadar. This is going to become my iPad manual from here on in. Customised iPads for all iPad 2 tips and original iPad tips - get 'em here! With great new features like two video cameras, a faster processor and a thinner design, the iPad 2 is the world's best tablet device. Reading on the iPad for the Little Ones Generating a love of reading is one of those gifts that benefit a child throughout their whole life. These apps and storybooks are a couple of ways that you can use the iPad to develop this passion. Some are beautiful illustrated others have cool narrative while some just use the touch and swipe technology in a new way. Check out a couple of these titles the next time you want to get a kid into reading.

Finally You Can Use Microsoft Office on Your iPad One of the weaknesses of iPad app store is its glaring shortage of productivity apps. Apple is too busy with other things to seriously address this issue letting the room for other developers to take charge of it. CloudOn is one of the apps that has recently been added to the productivity sector of the iPad allowing users to have an instant access to Microsoft Office as if they were on their computers.

10 Great, Free Apps for Students for Notetaking and Class Planning These days, there are some great apps for students to use to take notes for class, or to use as class planners. 1. Evernote and EverStudent My favorite is Evernote. I use it for everything, literally, and many of my students use it for taking notes, clipping web pages, creating to do lists, and more. There is also a new Android app available, called EverStudent, that integrates with Evernote and acts as a planner for students.

What are these tablets good for? Drills and skills ... pupils at St Luke's Catholic Primary School in Revesby. Photo: Steve Christo Parents are pressuring schools into buying iPads for the classroom, despite a lack of evidence about their educational benefit, no guidelines for teaching with them, and confusion about the best apps to use. Schools across the state are purchasing ''significant'' numbers of iPads without any real idea of their true value in the classroom, a NSW Department of Education study has found.