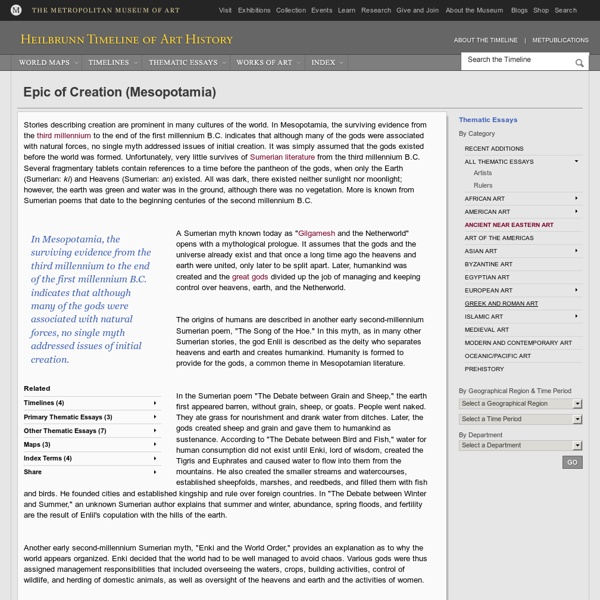 Stories describing creation are prominent in many cultures of the world. In Mesopotamia, the surviving evidence from the third millennium to the end of the first millennium B.C. indicates that although many of the gods were associated with natural forces, no single myth addressed issues of initial creation. It was simply assumed that the gods existed before the world was formed. Unfortunately, very little survives of Sumerian literature from the third millennium B.C. Several fragmentary tablets contain references to a time before the pantheon of the gods, when only the Earth (Sumerian: ki) and Heavens (Sumerian: an) existed. A Sumerian myth known today as "Gilgamesh and the Netherworld" opens with a mythological prologue. The origins of humans are described in another early second-millennium Sumerian poem, "The Song of the Hoe." In the Sumerian poem "The Debate between Grain and Sheep," the earth first appeared barren, without grain, sheep, or goats. Related:  the new mystic • Creation Myths + Related

Top 10 Unusual Ancient Weapons Weird Stuff Mankind always has, and always will, fight wars. And in order to fight said wars, man needed weapons. Using whatever skills and resources they had, man built tools that would slash, smash, pierce and tear their enemies. Used by the Māori tribes of New Zealand, this simple-looking, yet solid, club was built from nephrite jade. Perhaps the most well-known on this list, the Chinese hook swords were wielded by the normally passive Shoalin monks of northern China. The kpinga was a throwing knife that was used by experienced warriors of the Azande tribe. The macuahuitl was basically a large, sword-shaped piece of wood, with razor-sharp pieces of obsidian embedded in the sides. This rather odd-looking weapon was used in the arenas by the gladiators of the ancient Roman Empire. Don’t be fooled, the chakram is not something you would want to play frisbee with. Now I have to hand it to the Chinese, their weapons have made four entries on my list.

Comparison of Four African Creation Myths by Jill Stuckwisch The four creation myths found on the internet, "An African Cosmogony," "An African Story of the Creation of Man," "Egyptian Cosmogony and Theogony," and the Yoruba creation myth found under "The Minneapolis Institute of Arts," have similar elements and incorporate values and norms common across many African Ethnic groups. One of the dominant values common to many ethnic groups is the value of the family and group. All four myths directly illustrate the belief that a person is described in terms of his or her family and lineage. A commonality between all of the myths except "An African Story of the Creation of Man" is that creation is by way of the mouth or spoken word accompanies creation. in "An African Cosmogony" Bumba, the creator, brings forth everything in the world by vomiting them up; all things first pass through Bumba's mouth before coming into existence. Return to Student Projects Return to Religious Traditions of the African Diaspora

Enoch & the Nephilim - Part III Enoch & the Nephilim Part III The Evidence Mounts "More and more we are finding that mythology in general though greatly contorted very often has some historic base. And the interesting thing is that one myth which occurs over and over again in many parts of the world is that somewhere a long time ago supernatural beings had sexual intercourse with natural women and produced a special breed of people." -Francis A. Evidence for the existence of the Nephilim goes beyond the biblical record. "I have begotten a strange son," said Lamech, "...his nature is different and he is not like us, and his eyes are as the rays of the sun, and his countenance is glorious. Lamech did what most husbands would have done: he reproached his wife for infidelity. How enlightening for our study! Here is the statement made by Bat-Enosh as it reads in the Lamech Scroll: "My lord and kinsman, remember my delicate feelings. The Genesis Apocryphon is not the only extrabiblical documentation. An amazing book!

Genesis creation narrative The Genesis creation narrative is the creation myth of both Judaism and Christianity. It is made up of two parts, roughly equivalent to the first two chapters of the Book of Genesis. In the first part, Genesis 1:1 through Genesis 2:3, Elohim, the generic Hebrew word for God, creates the world in six days, then rests on, blesses and sanctifies the seventh day. A common hypothesis among biblical scholars is that the first major comprehensive draft of the Pentateuch (the series of five books which begins with Genesis and ends with Deuteronomy) was composed in the late 7th or the 6th century BC (the Yahwist source) and that this was later expanded by other authors (the Priestly source) into a work very like the one we have today. Composition[edit] Sources[edit] As for the historical background which led to the creation of the narrative itself, a theory which has gained considerable interest, although still controversial, is "Persian imperial authorisation". Structure[edit] Background[edit]

Sacred Earth - Sacred Plants: Mandrake (Mandragora officinalis) © Kat Morgenstern, February 2002 There are 6 species in this genus, the most common of which is Mandragora officinarum. The perennial plants form a leaf-rosette with no stalk. The leaves can grow up to a foot in size and are between 4 - 5 inches wide with a sharply pointed apex. When they first emerge they stand erect, but gradually flatten out. Mandrake originates in the eastern Mediterranean region and is distributed throughout southern Europe, the Middle East and northern Africa, where it grows in waste places and abandoned fields in sandy and rocky, well draining soil. Once shrouded in much mystery and lore, Mandrake, the most important magical plant of the Middle Ages, today has been all but forgotten. Mandrake was also known to have narcotic properties and in Antiquity was often used as an anaesthetic for surgical procedures. Apuleius thought it an effective remedy to counteract possession by evil spirits. Such a powerful magical ally was of course not easy to come by.

Framework interpretation (Genesis) This article focuses on the views of certain Christian commentators and theologians. For a more general account of the topic, see Genesis creation narrative. The framework interpretation (also known as the literary framework view, framework theory, or framework hypothesis) is a description of the structure of the first chapter of the Book of Genesis (more precisely Genesis 1:1-2:4a), the Genesis creation narrative. It can be illustrated with the following table: Genesis 1 divides its six days of Creation into two groups of three ("triads"). Differences exist on how to classify the two triads, but Meredith G. The framework interpretation is held by many theistic evolutionists and some progressive creationists. Old Testament and Pentateuch scholar Gordon Wenham supports a schematic interpretation of Genesis 1 in his two volume, scholarly commentary on Genesis. Jump up ^ Kline, "Space and Time," p. 6.Jump up ^ Davis A. Henri Blocher (1984).

The Temple Mount in Jerusalem