The Earth and Beyond 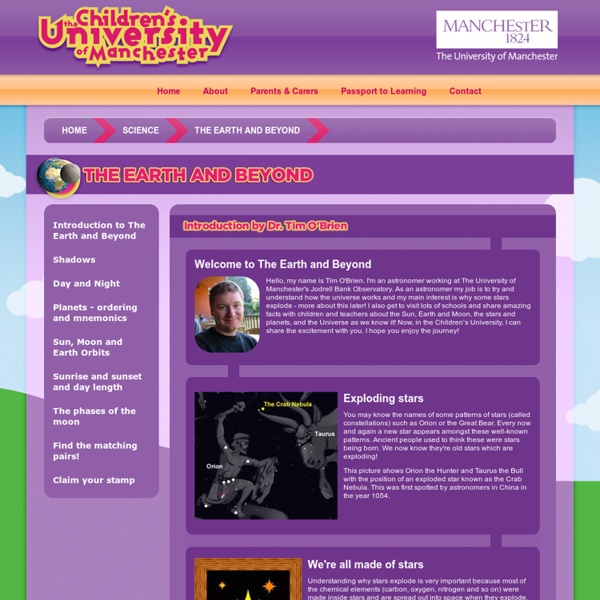 Welcome to The Earth and Beyond Hello, my name is Tim O'Brien. I'm an astronomer working at The University of Manchester's Jodrell Bank Observatory. As an astronomer my job is to try and understand how the universe works and my main interest is why some stars explode - more about this later! I also get to visit lots of schools and share amazing facts with children and teachers about the Sun, Earth and Moon, the stars and planets, and the Universe as we know it! Now, in the Children’s University, I can share the excitement with you. Exploding stars You may know the names of some patterns of stars (called constellations) such as Orion or the Great Bear. This picture shows Orion the Hunter and Taurus the Bull with the position of an exploded star known as the Crab Nebula. We're all made of stars Understanding why stars explode is very important because most of the chemical elements (carbon, oxygen, nitrogen and so on) were made inside stars and are spread out into space when they explode.

Related:  To Download 2 • Science and ICT • science made fun

Connectors Connector Diagnostic: identify specific points that need review Quiz 1: beginning – intermediate Quiz 2: intermediate – advanced Overview of Coordinators, Subordinators & Prepositional Heads KS1 Science The clues are the names of the adult animals, the correct answers are the name of their young. © v2vtraining.co.uk A three part sorting activity based around animals. Sort either animals and plants, animals with or without legs and how animals move.

The Elements Revealed: An Interactive Periodic Table In the October 2011 issue of Scientific American, we celebrate the International Year of Chemistry. Learn more about its impact on our daily lives in our Special Report. UPDATED: 06/18/2013 In honor of the 2013 Lindau meeting, which focuses on chemistry, we have updated our interactive periodic table with links to Nature Chemistry's In Your Element essay series. Each essay tells the story of a particular element, often describing its discovery, history and eventual uses. Main Sources & More to Explore: The Poisoner’s Handbook: Murder and the Birth of Forensic Medicine in Jazz Age New York.

Educational Leadership:Technology-Rich Learning:New Literacies and the Common Core A group of high school students stares intently at the famous crop-duster sequence from Alfred Hitchcock's North by Northwest. Cary Grant is standing alone at the side of a deserted highway. As film buffs know, Grant isn't alone for long; a mysterious crop-duster plane soon appears out of nowhere and begins dive-bombing him, chasing him down the road until he is forced to take cover in a cornfield. As the students watch the film, they look for moments when editing cuts have been made by the film editor. Each time an edit occurs (when one shot switches to another), they clap their hands. The students' claps become closer and closer together, and it becomes evident that as the scene picks up in intensity, Hitchcock and his film editor have also picked up the pace of the cuts.

Jamie's Ministry of Food "I want to inspire you to get in the kitchen and cook meals for yourself and your family from scratch, whether you're a complete beginner or a good cook who likes simplicity. With some basic skills under your belt and a handful of recipes, you'll be able to prepare nutritious meals on any budget." Jamie Oliver Tower Hamlets Council join the Ministry of Food campaign to improve residents' cooking skills Thu 16th Apr 2015 10:16READ MORE Ministry of Food Bradford celebrates 5th Birthday Mon 08th Dec 2014 15:08READ MORE 125 Great Science Videos: From Astronomy to Physics & Psychology Astronomy & Space Travel A Brief, Wondrous Tour of Earth (From Outer Space) – Video – Recorded from August to October, 2011 at the International Space Station, this HD footage offers a brilliant tour of our planet and stunning views of the aurora borealis.A Universe from Nothing – Video – In 53 minutes, theoretical physicist Lawrence Krauss answers some big enchilada questions, including how the universe came from nothing.A Year of the Moon in 2.5 Minutes – Video – The Lunar Reconnaissance Orbiter has been orbiting the moon for over a year. The footage gets compressed into 2 slick minutes.A Day on Earth (as Seen From Space) – Video – Astronaut Don Pettit trained his camera on planet Earth, took a photo once every 15 seconds, and then created a brilliant time-lapse film.Atlantis’s Final Landing at Kennedy Space Center – Video – After more than 30 years, the space shuttle era comes to a close. Video runs 30 minutes. Physics

49 Story Starters & Writing Ideas for Elementary Kids Story Starters & Writing Ideas for Elementary Kids – Oh the many joys of journaling! I love to write about journaling tips, creative journaling and journal writing techniques. But I am most often asked for a listing of journaling topics and prompts. Writing in a journal is one of my very favorite activities, and I hope it is one of your student’s favorite activities, too. Personally, I am rarely at a loss for something to write about in my journal, but many people need some help to get them started writing. This seems to be be the case especially for elementary kids.

Healthy Eating Welcome to the Healthy eating module for children aged 5-8 years. This module supports primary school children learning about healthy eating, as depicted by the eatwell plate and is comprised of a comprehensive Teachers' Guide and three Key Facts; Key Fact 1 - Food is a basic requirement for life; Key fact 2 - People choose different types of food; The Photosynthesis Cycle" The Earth's atmosphere is mostly composed of nitrogen. Oxygen makes up just 21 percent of the air we breathe. Carbon dioxide, argon, ozone, water vapor and other gasses make up a tiny portion of it, as little as 1 percent. These gasses probably came from several processes as the Earth evolved and grew as a planet. But some scientists believe that the Earth's atmosphere would never have contained the oxygen we need without plants.

50 Creative Writing Topics for kids Updated 9/15 Materials: Paper, pens/pencils, markers/crayons Creative writing is a great way for children to express themselves. How do you get kids to want to write without complaining? Give them fun topics which they will learn about themselves while writing. Have them draw a picture or collage to go with their essay. Apps for Smartphones and Tablets NASA Spinoff NASA Spinoff profiles the best examples of technology that have been transferred from NASA research and missions into commercial products. From life-saving satellite systems to hospital robots that care for patients and more, NASA technologies benefit society. There's more space in your life than you think! The Energy Story - Introduction Energy is one of the most fundamental parts of our universe. We use energy to do work. Energy lights our cities. Energy powers our vehicles, trains, planes and rockets.

Storytelling Prompts for Kids - Tell Me A Story Time for the Virtual Chapter Book Club for Kids. The theme for November is Fairy Tales, Fables and Fractured Fairy Tales. My daughters have actually been reading quite a few fairy tale chapter books lately. There is something about fairy tales and fables that is always appealing to children. My youngest daughter came across the book “Clemency Pogue, Fairy Killer” by JT Petty and illustrated by Will Davis.

For Educators Search Educational Resources Search hundreds of resources by subject, grade level, type and keyword. These lesson plans and teaching materials support your STEM curriculum. NASA Wavelength A digital collection of Earth and space science resources for educators of all levels – from elementary to college, to out-of-school programs. NASA Education YouTube Channel