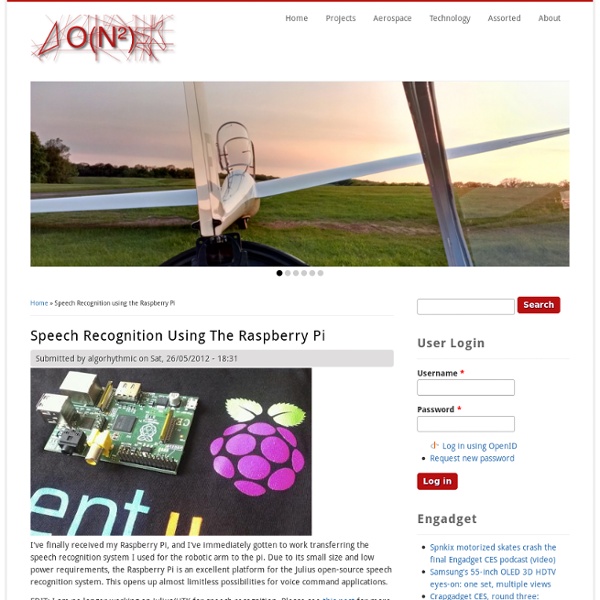 iGuardian - The Home Internet Security System by Itus Networks — Kickstarter iGuardian is the world’s first Internet protection system designed specifically for home use. Almost every day you can read headlines about cyber-attacks or online threats. Cybercriminals are constantly improving their attack methods to become more sophisticated and difficult to detect. Everyone knows to be careful when clicking on links in emails or opening files. Unfortunately, that is no longer enough.

How to create a time lapse video with Raspberry Pi After installing a Pi camera module and capturing pictures and videos with raspistill and raspivid commands, I wanted to create a time lapse video of the nice scenery that I have in the back of my apartment. For those who don't know what it is, time-lapse video (or often-called time-lapse photography) is a shooting technique where contiguous photo frames of a changing scene are captured for an extended period of time in a much lower rate than a typical video frame rate. When the collected frames are played back in a faster frame rate, it creates a so-called "time-lapsing" effect. You might already have seen stunning looking night-to-day time-lapses or fast moving clouds on TV.

pyector - ECTOR learning chatterbot in Python ECTOR is a learning chatterbot. pyECTOR is its python version. ECTOR learns from what people say. It is based on an artificial intelligence architecture, that is inspired from Copycat, an AI system from Mitchell and Hofstadter. The Concept Network it uses is a mix between neural and semantic networks. Howto Raspberry Pi : OpenELEC on Raspberry Pi, get a great XBMC experience on your Raspberry Pi *** Updated April 5 2013 ***Major changes: Get a fully functional XBMC Media Center on Raspberry Pi ! The Raspberry Pi is a very cheap and interesting small computer created by the Raspberry foundation for educational purposes. Therefore, it comes with a GPU able to decode HD Video, a great community works on this device and allow us today to use it as a real XBMC Media Center. Major sources:

Coder Projects Things to make. Stuff to learn. Looking for something to do this weekend? Coder Projects are simple, fun, and sneakily educational things that can all be made with Coder and Rasberry Pi. Browse the list below to see what catches your eye, or if you feel inspired, contribute your own project to the site. Getting Started A Simple Chatbot in 71 lines of Python A naive chatbot program. No parsing, no cleverness, just a training file and output. It first trains itself on a text and then later uses the data from that training to generate responses to the interlocutor’s input.

How to Customize XBMC 12 Frodo with All the Bells and Whistles Kodi (formerly known as XBMC) is a great entertainment center software. But, here’s the deal: Like many other open source projects, it is driven by a very technical community, and it is not necessarily user-friendly enough for the average person to use and customize. Fortunately, with a bit of time and the right skin, you can set things up properly and make Kodi (XBMC) very user-friendly and rock solid. RPi Beginners Back to the Hub Getting Started: Buying Guide - for advice on buying the Raspberry Pi. How to use interrupts with Python on the Raspberry Pi and RPi.GPIO The latest big news in the world of Raspberry Pi Python GPIO programming is that Ben Croston has released an update for RPi.GPIO. Why is that a big deal? Because this version has interrupts. “What’s an interrupt?”