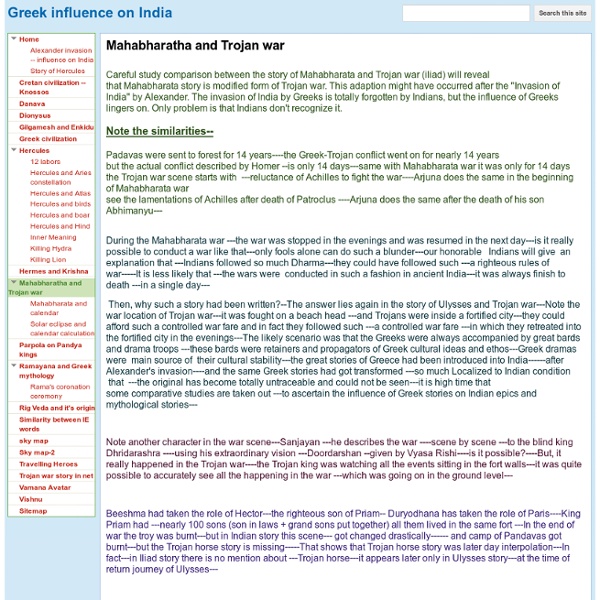 Pandavas were sent to forest for 14 years, similarly the Greek-Trojan conflict went on for nearly 14 years. The actual conflict described by Homer in Iliad is only 14 days. Same is the case with Mahabharata war, the war at Kurukshetra went on only for 14 days. During the Mahabharata war, the war was stopped in the evenings and was resumed in the next day. Then, why such a story had been written? Note another character in the war scene, Sanjayan describes the war, scene by scene to the blind king Dhridarashra, using his extraordinary vision. Bhishma had taken the role of Hector, the righteous son of Priam, Duryodhana has taken the role of Paris. Related:  Greece • Ελλάδ, Grèce, Grecia,Greece

Greek Gods Family Tree / Genealogy | ludios.org Doing homework? Your teacher has already seen this. See Theoi; it has properly-sourced information. Known errors: Generally inconsistent sourcing. Greco-Roman mysteries See Western esotericism for modern "mystery religions" in the Western cultural sphere. Definition[edit] The term "Mystery" derives from Latin mysterium, from Greek mysterion (usually as the plural mysteria μυστήρια), in this context meaning "secret rite or doctrine". An individual who followed such a "Mystery" was a mystes, "one who has been initiated", from myein "to close, shut", a reference to secrecy (closure of "the eyes and mouth")[4]:56 or that only initiates were allowed to observe and participate in rituals. Characteristics[edit] Mystery religions form one of three types of Hellenistic religion, the others being the imperial cult or ethnic religion particular to a nation or state, and the philosophic religions such as Neoplatonism. Mysteries thus supplement rather than compete with civil religion. The mystery cults offered a niche for the preservation of archaic religious ritual, and there is reason to assume that they were very conservative. List of mystery cults[edit]

Norse Runes — Scandinavian Viking Runes — Norse Rune Alphabets The eldest runestones, inscribed with Norse runes, date from the 4th century. These were the Elder Futhark runes. However, the most of the runestones were created during the late Viking Age and thus inscribed with the Younger Futhark runes. The runestones with Norse runes were usually erected to commemorate one or several deceased kinsmen, and in most cases these people died at home peacefully. Usually, men raised or commanded raising a runestone, while some of them are raised by women, usually widows of the deceased. Photo: Runestone U 164 (one of the Jarlabanke runestones), detail.

Apollo (Crown) God in Greek mythology Apollo[a] is one of the most important and complex of the Olympian deities in classical Greek and Roman religion and Greek and Roman mythology. The national divinity of the Greeks, Apollo has been recognized as a god of archery, music and dance, truth and prophecy, healing and diseases, the Sun and light, poetry, and more. As the patron deity of Delphi (Apollo Pythios), Apollo is an oracular god—the prophetic deity of the Delphic Oracle. Apollo's capacity to make youths grow is one of the best attested facets of his panhellenic cult persona. Apollo is an important pastoral deity, and was the patron of herdsmen and shepherds. Etymology Apollo (Attic, Ionic, and Homeric Greek: Ἀπόλλων, Apollōn (GEN Ἀπόλλωνος); Doric: Ἀπέλλων, Apellōn; Arcadocypriot: Ἀπείλων, Apeilōn; Aeolic: Ἄπλουν, Aploun; Latin: Apollō) A Luwian etymology suggested for Apaliunas makes Apollo "The One of Entrapment", perhaps in the sense of "Hunter".[24] Greco-Roman epithets Sun Wolf Origin and birth Wars

Gaia (Greek Mythology) The Greek word γαῖα (transliterated as gaia) is a collateral form of γῆ[4] (gē, Doric γᾶ ga and probably δᾶ da)[5] meaning Earth,[6] a word of uncertain origin.[7] R. S. P. Beekes has suggested a Pre-Greek origin.[8] In Mycenean Greek Ma-ka (trans. as Ma-ga, "Mother Gaia") also contains the root ga-.[9][10] According to Hesiod, Gaia conceived further offspring with Uranus, first the giant one-eyed Cyclopes: Brontes ("Thunder"), Steropes ("Lightning") and Arges ("Bright");[16] then the Hecatonchires: Cottus, Briareos and Gyges, each with a hundred arms and fifty heads.[17] As each of the Cyclopes and Hecatonchires were born, Uranus hid them in a secret place within Gaia, causing her great pain. Because Cronus had learned from Gaia and Uranus, that he was destined to be overthrown by his own child, Cronus swallowed each of the children born to him by his Titan sister Rhea. With Gaia's advice[21] Zeus defeated the Titans. In classical art Gaia was represented in one of two ways.