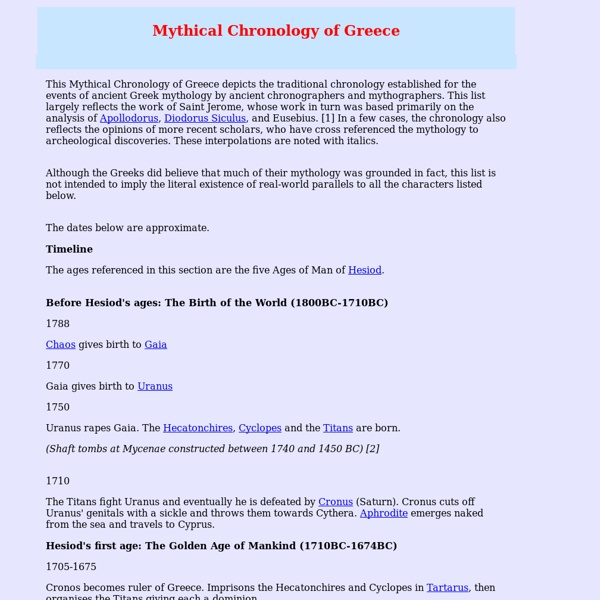 This Mythical Chronology of Greece depicts the traditional chronology established for the events of ancient Greek mythology by ancient chronographers and mythographers. This list largely reflects the work of Saint Jerome, whose work in turn was based primarily on the analysis of Apollodorus, Diodorus Siculus, and Eusebius. [1] In a few cases, the chronology also reflects the opinions of more recent scholars, who have cross referenced the mythology to archeological discoveries. These interpolations are noted with italics. Although the Greeks did believe that much of their mythology was grounded in fact, this list is not intended to imply the literal existence of real-world parallels to all the characters listed below. The dates below are approximate. Timeline The ages referenced in this section are the five Ages of Man of Hesiod. Before Hesiod's ages: The Birth of the World (1800BC-1710BC) Chaos gives birth to Gaia Gaia gives birth to Uranus Uranus rapes Gaia. Cronos becomes ruler of Greece. Related:  Greece • Ελλάδ, Grèce, Grecia,Greece • Mythology

Greek Gods Family Tree / Genealogy | ludios.org Doing homework? Your teacher has already seen this. See Theoi; it has properly-sourced information. Known errors: Generally inconsistent sourcing. Greek Stories about Zeus-The Birth of Zeus, the King of the Gods Zeus was born by the Titans Cronus and Rhea. Cronus was notorious for being a very jealous and greedy deity. Out of the fear one of his children could take his throne, Cronus swallowed every child Rhea was giving birth to. However, when Rhea gave birth to her last child, Zeus, she managed to trick Cronus with the help of the Titans Uranus and Gaea. Zeus was raised secretly by the Nymphs and was fed with honey and milk from the goat nurse Amaltheia with the help of her broken-off horn. Soon came the day where Zeus was mature enough to claim the Kingdom of the World and he started a battle against his father and the Titans. Then, with the help of his siblings, Zeus overthrew the Titans in the depths of the Underworld, the Tartarus. After overthrowing his father Cronus, Zeus was confronted with the Giants and also the monster Typhon, which he both defeated successfully.

Introduction to Hindu Mythology Hindu religion is more philosophy than doctrine. There is no authoritative hierarchy of clergy; the religion is highly decentralized with multiple sects, perfectly acceptable to Hinduism (in contrast to the regrettable divisions within Christianity). The Hindu claim that there are different paths for each person. A practical definition of Hinduism: performing the duty (dharma) of one's stage in life and social status (caste). The essence of the Hindu vision of reality lies in the tension between dharma (social duty or righteousness) and moksha (release from the material world, final liberation from the endless cycles of rebirth). Both these perspectives, the world-supporting and the world-denying, are necessary to fulfill human destiny. Other important terms : karma = moral law of cause and effect (deeds of past lives determine present) samsara = rebirth according to the nature of a person's karma; what we are now is the sum of all we have done in the past. Dharma and caste Cycles of time

Family tree of the Greek gods Key: The essential Olympians' names are given in bold font. See also List of Greek mythological figures Notes External links Media related to Family trees of Greek mythology at Wikimedia Commons The Battle with the Titans - Classical Mythology With his rescued siblings, Zeus had the beginnings of an army with which to challenge Cronus. However, Cronus had some difficulty in assembling his own forces. Some of the Titans refused to help him in the struggle. None of the Titanesses participated, and Oceanus, Cronus's brother, also refused to fight. Prometheus possessed the gift of prophecy, which is why he pledged his loyalty to Zeus. In preparation for war, each side created fortifications. The war was a monumental conflict. Gaia told Zeus that freeing the Cyclopes and Hecatoncheires from Tartarus would gain the Olympians some very powerful allies. With these giants newly recruited to Zeus's army, the tide of the war began to turn. Zeus laid siege to Mount Othrys.