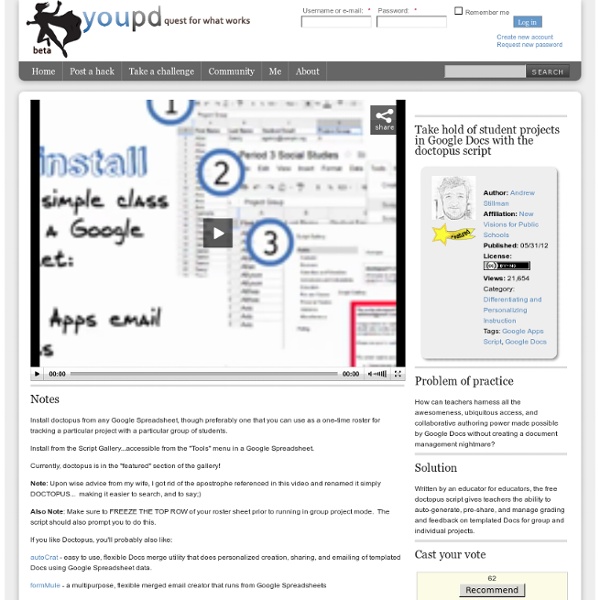 Using Voice Comments with Google Docs for End of the Year Projects I had a “just in time” professional development moment thanks to Jennifer Roberts and her video titled “Docs Voice Comments.” I wanted to share it with other educators as I know many of us are planning end of the year projects, assignments, and written pieces. These culminating assignments are incredibly time consuming to grade. I also wonder how many of my students carefully read the comments I make on these pieces since they get them back just as the school year ends and summer break begins. Lastly, these end of the year projects are finished products, so covering them with comments or editing directly on them may not be the most effective way to provide feedback.

Learning MIT Calculus in 5 Days To access the course for free, click here. Last week marked week one of my MIT Challenge, to learn their 4-year computer science curriculum in 12 months, without taking classes. As you can watch in the video above, this week was calculus. I started the class on Monday and wrote the exam on Friday afternoon. This meant I had roughly 4.5 days to watch 30+ hours of video lectures, understand all the concepts and master the math enough to pass a 3-hour comprehensive exam. www.treasuretrovegafe.com I refer to this training series as 'Treasure Trove' featuring Google for Education, focusing on authentic and valuable ways to use the Google Tools. This training is hosted at individual schools, organizations, conferences, and Google Summits & Cloud Camps' worldwide. These lessons keep the beginner in mind while providing those ready to ‘level’ up with unique uses and tips for using Google apps in the classroom, organization, for productivity or collaboration. Topics in the Treasure Trove Series....

A Tutorial For Google Drive In The Classroom A Tutorial For Google Drive In The Classroom Tutorial by TeachThought Staff The use of cloud-based word processing and storage is among the most underrated examples of education technology. If literacy is the foundation of learning, tools that promote its integration can be considered equally foundational. Fun Kids Online Math Games "Sheppard offers everything from early math to pre-algebra. The lessons include interactive activities to practice concepts. Students can shoot fruit, pop balloons, and even play math man (the math version of pac man!). Fractions, place value, money, and basic operations are some of the areas that are covered. Check it out at " --Shannon Jakeman , sjakeman.blogspot.com Scripts - New Visions CloudLab New Visions' Script Gallery Prior to March 2014 Apps Scripts for Google Sheets were installed and via a "locally-attached copy" made available to users through the "Script Gallery." Since then, Google has made big changes to scripts, most visibly by creating a new way of distributing them as Add-ons for Docs -- in which all users run from a single, developer-maintained copy of the codebase. Add-ons are now available for Google Docs, Sheets, and Forms through three respective galleries in the Chrome Web Store. A number of our tools from the heyday of scripts have not been ported over to Add-ons framework, but they are still quite useful and fun perfectly fine in the NEW Google Sheets when run as local scripts. Since you can no longer access the old scripts gallery via a Sheets, you must access these scripts by making yourself a copy of an existing Google Sheet (File -> Make Copy) that holds the code in the Script Editor.

50 Of The Best Google Chrome Extensions For Teachers 50 Of The Best Google Chrome Extensions For Teachers by TeachThought Staff Google Chrome is, increasingly, where it’s at. As of April 2014, Google Chrome become the de facto internet browser, passing Internet Explorer for the first time after a five-year free-fall from Microsoft’s out-of-favor software. Fast forward to today, and StatCounter paints an even bleaker picture for Google Chrome competition, with Safari, Firefox, and IE combined still below Chrome’s nearly-50% market share. While the real story is more complicated, with Microsoft bundling IE with windows giving it a huge built-in user-base, the rise of Google Chromebooks, Apple’s elegant-but-iOS-only Safari, and overall a subtle shift in mobile away from browsers to apps muddling the picture even further, what’s truly “the best” or “most popular” browser isn’t cut-and-dry.

Google+ officially splits into Photos and Streams Google is splitting Google+ apart, breaking the social network's photo element away from what it's now calling "Streams." Bradley Horowitz, a longtime Google VP of product, announced that he had become the new lead for both new products, Google Photos and Streams, in a post on Google+ today. Horowitz steps into the role vacated by David Besbris, who took over the top job at Google+ less than a year ago. Hangouts will continue on Horowitz says that he's now running Google's Photos and Streams products — two new names for existing elements of Google+ that conspicuously don't reference the social network. 25 Google Drive Tips You’ve Probably Never Heard Before Recently I moved over from Dropbox to Google Drive and found a few unexpected benefits. At first I had a little trouble managing the space since the 1TB on my Google Drive was bigger than my HDD, but after I got that sorted I started to learn some of the deeper features of Google Drive, some of which are pretty cool. Below is a list of the top tips and tricks I have learned from playing with Google Drive over the last few months. Work Well with Others Google drive got it’s early breaks in the market by being far superior at collaborating with others than any other tool out there. This still holds true today.

Ten Minutes of Connecting: Day 19 – Collaborating with Google Docs Today’s 10 minutes of connecting is a beginner’s look at collaboration with Google Docs. There are very few places that don’t use Google Drive today to collaborate on notes, projects, presentations, thinking, etc. Google Drive allows you to create different types of shared files, like spreadsheets and presentations. Google Docs is a starting place for getting used to using cloud storage and sharing documents with others.