Greek mythology, The 12 Gods of Olympus 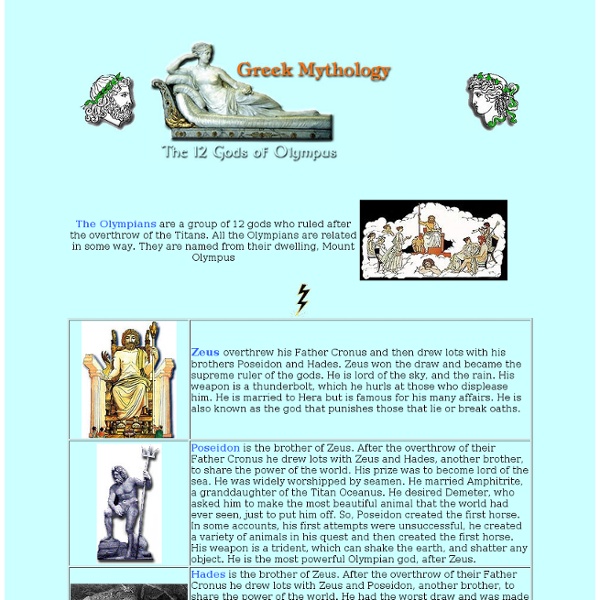 Mythical Chronology of Greece This Mythical Chronology of Greece depicts the traditional chronology established for the events of ancient Greek mythology by ancient chronographers and mythographers. This list largely reflects the work of Saint Jerome, whose work in turn was based primarily on the analysis of Apollodorus, Diodorus Siculus, and Eusebius. [1] In a few cases, the chronology also reflects the opinions of more recent scholars, who have cross referenced the mythology to archeological discoveries. These interpolations are noted with italics.

Family tree of the Greek gods Key: The essential Olympians' names are given in bold font. See also List of Greek mythological figures Notes External links Greek Gods Family Tree / Genealogy Doing homework? Your teacher has already seen this. See Theoi; it has properly-sourced information. Greek Creation Story, Cronus and Rhea and Birth of Zeus According to Greek mythology, in the beginning there was nothing. This was called Chaos. From this nothingness came light, Mother Earth (Gaia) and Sky (Uranus) were formed. From Gaia and Uranus came six twins known as the Titans. The six twin Titans were named Oceanus and Thethys, Coeos and Phoebe, Hyperion and Thea, Creos and Themis, Iapetos and Clymene, and finally Cronos and Rhea. Gaia and Uranus also gave birth to three Cyclopes, three giants, each with fifty heads and one-hundred arms.

Greek Mythology - Ancient History In Greek mythology, there is no single original text like the Christian Bible or the Hindu Vedas that introduces all of the myths’ characters and stories. Instead, the earliest Greek myths were part of an oral tradition that began in the Bronze Age, and their plots and themes unfolded gradually in the written literature of the archaic and classical periods. The poet Homer’s 8th-century BC epics the Iliad and the Odyssey, for example, tell the story of the (mythical) Trojan War as a divine conflict as well as a human one. Greek Stories about Zeus-The Birth of Zeus, the King of the Gods Zeus was born by the Titans Cronus and Rhea. Cronus was notorious for being a very jealous and greedy deity. Out of the fear one of his children could take his throne, Cronus swallowed every child Rhea was giving birth to.

Gods, Goddesses, and Heroes A family portrait of the 12 Olympians. But wait, who's that crouching by Zeus? The ancients Greeks were polytheistic — that is, they worshipped many gods. Their major gods and goddesses lived at the top of Mount Olympus, the highest mountain in Greece, and myths described their lives and actions. In myths, gods often actively intervened in the day-to-day lives of humans. Myths were used to help explain the unknown and sometimes teach a lesson. The Battle with the Titans - Classical Mythology With his rescued siblings, Zeus had the beginnings of an army with which to challenge Cronus. However, Cronus had some difficulty in assembling his own forces. Some of the Titans refused to help him in the struggle. None of the Titanesses participated, and Oceanus, Cronus's brother, also refused to fight.

summary of mahabharata Summary of the MahabharataThe Mahabharata tells the story of two sets of paternal first cousins--the five sons of the deceased king Pandu (the five Pandavas and the one hundred sons of blind King Dhritarashtra--who became bitter rivals, and opposed each other in war for possession of the ancestral Bharata kingdom with its capital in the "City of the Elephants," Hastinapura , on the Ganga river in north central India.