Simple Ideas, That Are Borderline Genius 2 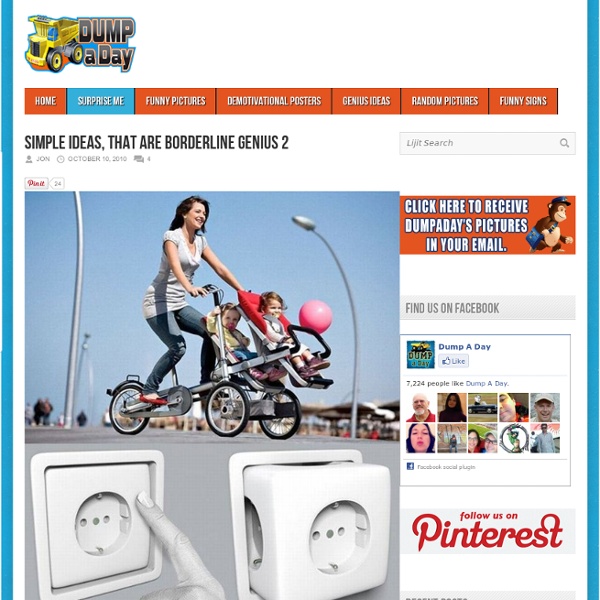 10 Luxurious Gold Plated Cars « OpenFreak.Com Luxury is something too expensive or difficult to create. But is anything costly for Middle East? Well this post features an accumulation of gold plated cars owned by the Arabs. 1. Bugatti Veyron 2. 4. 5. 6. 7. 8. 9. 10. Share on Tumblr Defendius Door Chain Yesterday was 1 April ( April Fools’ Day ), and this door chain concept designed by Artemy Lebedev fell into the category of a good joke. I don’t like the April Fools’ Day, but this door chair is really funny, and appropriate for a day like this. The only problem with something like this might be …if you have a visitor you might have a dialog like this : “I’ll be right there, hold on!“, after 2 minutes … “Just one more minute, I’ve almost got it!“, because the chain is long enough to reach the far end of the maze. – Via – Tranism

Stacked City Camping Structure for Portable Urban Shelter This incredible design for a portable city camping tower by Import.Export flies in the face of most of our associations with going camping: unlike the flat, natural and remote settings of standard campsites this structure is vertical, artificial and intended to be erected in even the most dense of urban settings. Aside from the obvious fun and adventure of inverting traditional camping, an urban camper could enjoy incredible views unavailable to the typical pedestrian and cities could set up a series of vertical camping structures for festivals and other major events to expand out-of-town guest accommodations – particularly for travelers moving around on the cheap. While such ideas are all well and good in theory and supported by beautiful drawings, they are at least doubly impressive when someone actually builds them.

Rotary Peeler by Damian Evans for Joseph Joseph Peeling With Three Variations There is a reason why potato peelers come with brown handles; to blend in with the peels, so that you accidentally throw it out with the trash and replace it with a new one. With a sophisticated peeler like this Rotary Peeler, I doubt any such accidents will happen. Designer: Damian Evans for Joseph Joseph Waterproof Notepad for Writing Down Ideas While in the Shower [Video] AquaNotes® is a waterproof notepad designed for all the people who feel that the only thing keeping them from being millionaires is remembering the ideas they have while bathing. According to the producers, AquaNotes® is a waterproof notepad that allows you to record your great ideas while you’re in the shower. It’s so durable you can even write underwater. They’re recyclable, environmentally friendly, and the notepad is printed with soy-based ink. Just like a post it, the written idea can be placed on your desk and put to action.