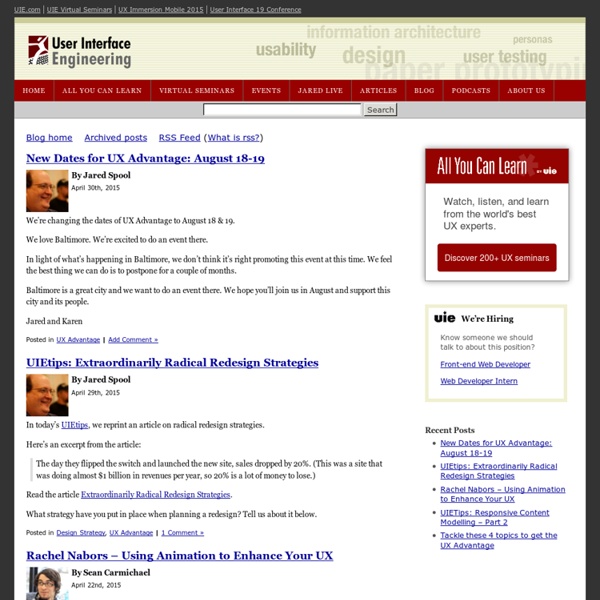 New Dates for UX Advantage: August 18-19 By Jared Spool April 30th, 2015 We’re changing the dates of UX Advantage to August 18 & 19. We love Baltimore. In light of what’s happening in Baltimore, we don’t think it’s right promoting this event at this time. Baltimore is a great city and we want to do an event there. Jared and Karen UIEtips: Extraordinarily Radical Redesign Strategies April 29th, 2015 In today’s UIEtips, we reprint an article on radical redesign strategies. Here’s an excerpt from the article: The day they flipped the switch and launched the new site, sales dropped by 20%. Read the article Extraordinarily Radical Redesign Strategies. What strategy have you put in place when planning a redesign? Rachel Nabors – Using Animation to Enhance Your UX By Sean Carmichael April 22nd, 2015 Podcast: Play in new window | Download (Duration: 18:23 — 9.6MB) [ Transcript Available ] Animation in interfaces has traditionally been seen as purely decorative and unnecessary. Read the rest of this entry »

Boxes and Arrows: The design behind the design AJAX Components - webreference.com [next] AJAX Components David Johnson, Alexei White, and Andre Charland Digg This Add to del.icio.us This chapter is excerpted from Enterprise AJAX: Strategies for Building High Performance Web Applications, authored by David Johnson, Alexei White, and Andre Charland, published by Prentice Hall, © Copyright 2007 Prentice Hall. In this chapter, after examining several patterns, we look at how they apply to actually building a user interface. We can build an application using conventional classes, some aspect-oriented programming, the DOM, and DOM Events. By the end of this chapter, we will have converted our customer listing AJAX application into a full-fledged declarative AJAX component. Imperative Components Now that you have a clear idea of how to get your JavaScript running when a web page loads, you can look at how to actually use JavaScript, the DOM, and CSS to make an AJAX component. Imperative coding is much like making a ham-and-cheese sandwich.

Explore the Book » Designing Web Interfaces All of the examples from the book are available on our companion flickr site. Below are the six design principles that organize the design patterns and best practices found in the book. As Alan Cooper states: "Where there is output, let there be input." This is the principle of direct manipulation. For example, instead of going to a separate page to edit content it can be done inline, directly in the context of the page. It's about keeping a light footprint. The page refresh is generally disruptive to the user’s mental flow. Discoverability is one of the primary challenges for rich interaction on the Web. Animations, cinematic effects, and various other types of visual transitions can be powerful techniques to enhance engagement and communication. A responsive interface is an intelligent interface. Chapter 1. Single Field Inline Edit Editing a single line of text in-context. Multi-Field Inline Edit Editing more complex information in-context. Overlay Edit Editing in an overlay panel. Table Edit

Design Meets Research: Gain: AIGA Journal of Business and Design Article by Debbie Millman & Mike BainbridgeFebruary 22, 2008 True story. At Sterling Brands in New York, we have a wonderful cleaning woman named Marta who comes to the office every night around seven o'clock to clean the place up. Most designers have been in this type of situation—whether our client wants to get the opinion of a lovely cleaning woman, a dogwalker, a mother-in-law or an executive assistant. A consumer drawing from market research representing Target. What our clients are seeking in today's incredibly competitive marketplace is some sense of safety—an insurance policy of sorts—a “gee, if Marta likes this design, it must be good” mentality to create a sense of confidence that the direction being taken with a new design is indeed a correct and meaningful choice. But unfortunately, it isn't quite as easy as this. Ford's commentary during the infancy of market research foreshadowed a sentiment about the discipline that is still very much an active one. Ethnographic Research

UXmatters :: Insights and inspiration for the user experience co Where The Rants Go By Zed A. Shaw : There was a one character bug in this, you should update. I absolutely hate CSS. It has to be the most inconsistent, poorly designed, bat shit fucking crazy piece of computing technology we have today. My first problem with CSS is simply that it just never does what you tell it to. I would die without Firebug to help me figure out why CSS is doing whatever the hell it's doing. It's so inconsistent, not based on any specific algorithmic theory, has no mental model a mere mortal can understand, uses dated terminology only a print designer from the 1500's comprehends, and just generally pisses off my sense of right and order in the world. Let's not even begin to talk about how it defies all of computing for the last 50 years by not having variables. Seriously, in 20 years, when the world looks back on us, they'll wonder why the fuck we struggled for decades with something so fucking weird. I'm going to share this secret with you as my attempt to recover order in the world.