The Battle with the Titans - Classical Mythology 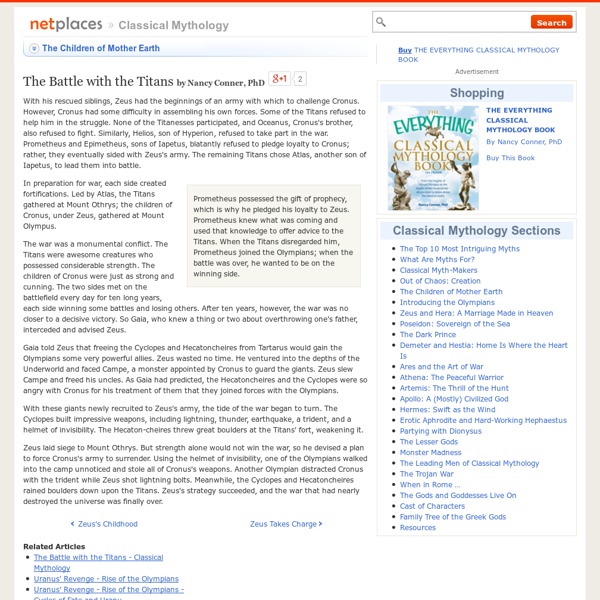 With his rescued siblings, Zeus had the beginnings of an army with which to challenge Cronus. However, Cronus had some difficulty in assembling his own forces. Some of the Titans refused to help him in the struggle. None of the Titanesses participated, and Oceanus, Cronus's brother, also refused to fight. Prometheus possessed the gift of prophecy, which is why he pledged his loyalty to Zeus. In preparation for war, each side created fortifications. The war was a monumental conflict. Gaia told Zeus that freeing the Cyclopes and Hecatoncheires from Tartarus would gain the Olympians some very powerful allies. With these giants newly recruited to Zeus's army, the tide of the war began to turn. Zeus laid siege to Mount Othrys. Related:  Greece • Ελλάδ, Grèce, Grecia,Greece • Mythology

Gaia (Greek Mythology) The Greek word γαῖα (transliterated as gaia) is a collateral form of γῆ[4] (gē, Doric γᾶ ga and probably δᾶ da)[5] meaning Earth,[6] a word of uncertain origin.[7] R. S. P. Beekes has suggested a Pre-Greek origin.[8] In Mycenean Greek Ma-ka (trans. as Ma-ga, "Mother Gaia") also contains the root ga-.[9][10] According to Hesiod, Gaia conceived further offspring with Uranus, first the giant one-eyed Cyclopes: Brontes ("Thunder"), Steropes ("Lightning") and Arges ("Bright");[16] then the Hecatonchires: Cottus, Briareos and Gyges, each with a hundred arms and fifty heads.[17] As each of the Cyclopes and Hecatonchires were born, Uranus hid them in a secret place within Gaia, causing her great pain. Because Cronus had learned from Gaia and Uranus, that he was destined to be overthrown by his own child, Cronus swallowed each of the children born to him by his Titan sister Rhea. With Gaia's advice[21] Zeus defeated the Titans. In classical art Gaia was represented in one of two ways.

Family tree of the Greek gods Key: The essential Olympians' names are given in bold font. See also List of Greek mythological figures Notes External links Media related to Family trees of Greek mythology at Wikimedia Commons Apollo (Crown) God in Greek mythology Apollo[a] is one of the most important and complex of the Olympian deities in classical Greek and Roman religion and Greek and Roman mythology. The national divinity of the Greeks, Apollo has been recognized as a god of archery, music and dance, truth and prophecy, healing and diseases, the Sun and light, poetry, and more. As the patron deity of Delphi (Apollo Pythios), Apollo is an oracular god—the prophetic deity of the Delphic Oracle. Apollo's capacity to make youths grow is one of the best attested facets of his panhellenic cult persona. Apollo is an important pastoral deity, and was the patron of herdsmen and shepherds. Etymology Apollo (Attic, Ionic, and Homeric Greek: Ἀπόλλων, Apollōn (GEN Ἀπόλλωνος); Doric: Ἀπέλλων, Apellōn; Arcadocypriot: Ἀπείλων, Apeilōn; Aeolic: Ἄπλουν, Aploun; Latin: Apollō) A Luwian etymology suggested for Apaliunas makes Apollo "The One of Entrapment", perhaps in the sense of "Hunter".[24] Greco-Roman epithets Sun Wolf Origin and birth Wars

Greco-Roman mysteries See Western esotericism for modern "mystery religions" in the Western cultural sphere. Definition[edit] The term "Mystery" derives from Latin mysterium, from Greek mysterion (usually as the plural mysteria μυστήρια), in this context meaning "secret rite or doctrine". An individual who followed such a "Mystery" was a mystes, "one who has been initiated", from myein "to close, shut", a reference to secrecy (closure of "the eyes and mouth")[4]:56 or that only initiates were allowed to observe and participate in rituals. Characteristics[edit] Mystery religions form one of three types of Hellenistic religion, the others being the imperial cult or ethnic religion particular to a nation or state, and the philosophic religions such as Neoplatonism. Mysteries thus supplement rather than compete with civil religion. The mystery cults offered a niche for the preservation of archaic religious ritual, and there is reason to assume that they were very conservative. List of mystery cults[edit]

The Kerala Articles: Comparison of Hindu and Greek Mythologies Of Gods and Men Greek Gods Image Courtesy : umich.edu Mythology is the oral retelling of stories or myths of a particular group of people or culture that lived long ago. They provide us an idea about the values, culture and intellectual development of the people of those cultures and civilizations. Two of the most vibrant, advanced and complex mythologies are that of the ancient Greeks and the Hindus (Indian). Zeus and Indra In Hindu mythology the Kashyapa fathered the Devas (Gods). Indra Image Courtesy : jnanam.net In Greek mythology the Gods were fathered by Cronus. Good and Evil The Gods of Mount Olympus represents good while their antitheses are the Titans represent evil. Devas battling the Asuras Image Courtesy : harekrsna.com Gods, Men and Evil While men have always worshipped and showed unfaltering devotion towards the Gods, the Gods on their part have not been as benevolent as they might lead us to believe. Prometheus giving fire to man Image Courtesy : wikipedia.org

Horus and Jesus | Egyptian Deities and Myths Compared to the Bible There are few books that have caused as much controversy as the Holy Bible. For centuries now, it has been regarded by many to be the "one true word of God". The writers of the Bible may have been human beings... but it is said that those writers had "divine inspiration" for their words. However, religions and worship of deities existed before the writings of the Bible. Horus One important note about the gods and goddesses of ancient Egypt... they were not one-dimensional beings. Hathor There are differing accounts of this... some of which have Isis as the wife of Horus, rather than his mother, which is a bit confusing. Horus is also the only son of the Osiris, the god of fertility and vegetation. Nepthys The Egyptian Creation Story In the Egyptian creation story, the four children of Geb (god of the sky) and Nut (goddess of the earth) sired four children. Whether or not she found them all is unknown... however, according to legend, she was able to conceive a child, Horus, with him.