Greek Stories about Zeus-The Birth of Zeus, the King of the Gods 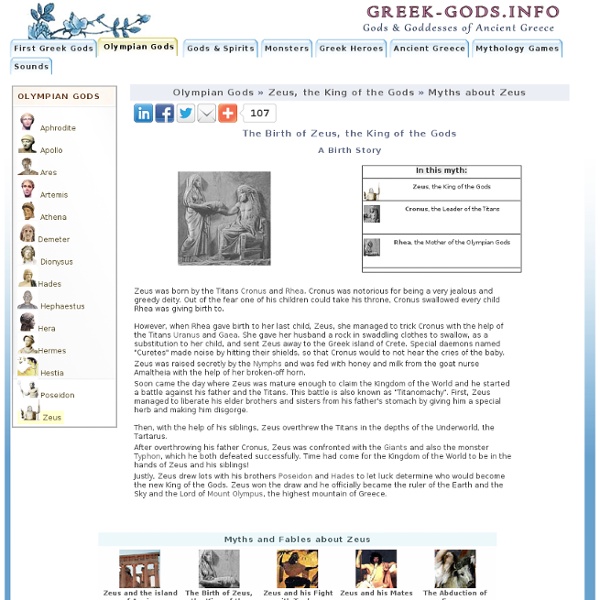 Zeus was born by the Titans Cronus and Rhea. Cronus was notorious for being a very jealous and greedy deity. Out of the fear one of his children could take his throne, Cronus swallowed every child Rhea was giving birth to. However, when Rhea gave birth to her last child, Zeus, she managed to trick Cronus with the help of the Titans Uranus and Gaea. She gave her husband a rock in swaddling clothes to swallow, as a substitution to her child, and sent Zeus away to the Greek island of Crete. Zeus was raised secretly by the Nymphs and was fed with honey and milk from the goat nurse Amaltheia with the help of her broken-off horn. Soon came the day where Zeus was mature enough to claim the Kingdom of the World and he started a battle against his father and the Titans. Then, with the help of his siblings, Zeus overthrew the Titans in the depths of the Underworld, the Tartarus. Related:  Greece • Ελλάδ, Grèce, Grecia,Greece

Greco-Roman mysteries See Western esotericism for modern "mystery religions" in the Western cultural sphere. Definition[edit] The term "Mystery" derives from Latin mysterium, from Greek mysterion (usually as the plural mysteria μυστήρια), in this context meaning "secret rite or doctrine". An individual who followed such a "Mystery" was a mystes, "one who has been initiated", from myein "to close, shut", a reference to secrecy (closure of "the eyes and mouth")[4]:56 or that only initiates were allowed to observe and participate in rituals. The Mysteries were thus cults in which all religious functions were closed to the uninitiated and for which the inner workings of the cult were kept secret from the general public. Characteristics[edit] Mystery religions form one of three types of Hellenistic religion, the others being the imperial cult or ethnic religion particular to a nation or state, and the philosophic religions such as Neoplatonism. Mysteries thus supplement rather than compete with civil religion.

Introduction to Hindu Mythology Hindu religion is more philosophy than doctrine. There is no authoritative hierarchy of clergy; the religion is highly decentralized with multiple sects, perfectly acceptable to Hinduism (in contrast to the regrettable divisions within Christianity). The Hindu claim that there are different paths for each person. A practical definition of Hinduism: performing the duty (dharma) of one's stage in life and social status (caste). The essence of the Hindu vision of reality lies in the tension between dharma (social duty or righteousness) and moksha (release from the material world, final liberation from the endless cycles of rebirth). Other important terms : karma = moral law of cause and effect (deeds of past lives determine present) samsara = rebirth according to the nature of a person's karma; what we are now is the sum of all we have done in the past. Dharma and caste Dharma means fulfilling one's duty in one's station in life, which is determined by birth not merit. Cycles of time

Greek Gods Family Tree / Genealogy | ludios.org Doing homework? Your teacher has already seen this. See Theoi; it has properly-sourced information. Known errors: Generally inconsistent sourcing. This chart was made in 2004, and Wikipedia was treated as a primary source. Mahabharatha and Trojan war - Greek influence on India Pandavas were sent to forest for 14 years, similarly the Greek-Trojan conflict went on for nearly 14 years. The actual conflict described by Homer in Iliad is only 14 days. Same is the case with Mahabharata war, the war at Kurukshetra went on only for 14 days. The Trojan war scene of Iliad starts with reluctance of Achilles to fight the war. Arjuna does the same in the beginning of Mahabharata war in the beginning of the war. During the Mahabharata war, the war was stopped in the evenings and was resumed in the next day. Then, why such a story had been written? Note another character in the war scene, Sanjayan describes the war, scene by scene to the blind king Dhridarashra, using his extraordinary vision. Bhishma had taken the role of Hector, the righteous son of Priam, Duryodhana has taken the role of Paris.

329 BC: Alexander the Great records two great 'flying shields' - Central Asia, - 329 BC Alexander the Great from the famous ancient mosaic. Classification & Features Type of Case/Report: StandardCase Hynek Classification: Special Features/Characteristics: Famous Person, Witness Photo Full Report / Article Source: Bruno Mancusi, UFO Updates mailing list, Apr. 18, 2003 [go to original source] Alexander the Great records two great silver shields, spitting fire around the rims in the sky that dived repeatedly at his army as they were attempting a river crossing. UFO researcher Bruno Mancusi, in a posting on the UFO Updates mailing list from April 18, 2003, gives the following references to this event. I had an e-mails exchange in 2001 with a Macedonian historian, Aleksandar Donski, about this tale. 1. Alexander the Great was not the first to see them nor was he the first to find them troublesome. Unfortunately, there is no reference. 2. "L'assedio di Tiro Durante l'assedio di Tiro nell'anno 332 a. (See English translation by Drake below.) 3. THE CATALOGUE-(i) B.C. 1. 4. 5.

The Battle with the Titans - Classical Mythology With his rescued siblings, Zeus had the beginnings of an army with which to challenge Cronus. However, Cronus had some difficulty in assembling his own forces. Some of the Titans refused to help him in the struggle. None of the Titanesses participated, and Oceanus, Cronus's brother, also refused to fight. Similarly, Helios, son of Hyperion, refused to take part in the war. Prometheus and Epimetheus, sons of Iapetus, blatantly refused to pledge loyalty to Cronus; rather, they eventually sided with Zeus's army. Prometheus possessed the gift of prophecy, which is why he pledged his loyalty to Zeus. In preparation for war, each side created fortifications. The war was a monumental conflict. Gaia told Zeus that freeing the Cyclopes and Hecatoncheires from Tartarus would gain the Olympians some very powerful allies. With these giants newly recruited to Zeus's army, the tide of the war began to turn. Zeus laid siege to Mount Othrys.