Resources to help you learn and use R 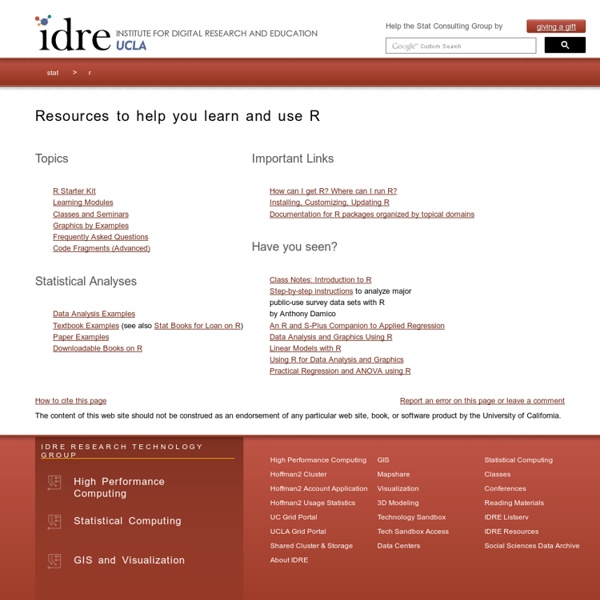 R Time Series Tutorial The data sets used in this tutorial are available in astsa, the R package for the text. A detailed tutorial (and more!) is available in Appendix R of the text. This page is basically the quick fix from Edition 2 updated a bit. You can copy-and-paste the R commands (multiple lines are ok) from this page into R. Printed output is blue, and you wouldn't want to paste those lines into R, would you? This quick fix is meant for people who are just starting to use R for time series analysis. If you're new to R/Splus, I suggest reading R for Beginners (a pdf file) first. ◊ Baby steps... your first R session. Ok, now you're an expert useR. We're going to get astsa now: install.packages("astsa") # install it ... you'll be asked to choose the closest CRAN mirror require(astsa) # then load it (has to be done at the start of each session) Let's play with the Johnson & Johnson data set. and you see that jj is a collection of 84 numbers called a time series object. Now try a plot of the data: you get:

Lexical scope and function closures in R | Darren Wilkinson's research blog Introduction R is different to many “easy to use” statistical software packages – it expects to be given commands at the R command prompt. This can be intimidating for new users, but is at the heart of its power. Most powerful software tools have an underlying scripting language. Programming from the ground up It is natural to want to automate (repetitive) tasks on a computer, to automate a “work flow”. Next, one can add in simple control structures, to support looping, branching and conditional execution. Although scripting is a simple form of programming, it isn’t “real” programming, or software engineering. Functions and procedures Procedures (or subroutines) are re-usable pieces of code which can be called from other pieces of code when needed. Functions are also re-usable pieces of code, but are mainly used to obtain a return-value that is computed on the basis of the given inputs. Variable scope Dynamic scope Lexical scope Function closures Function closures for scientific computing

Climate Charts & Graphs | My R and Climate Change Learning Curve Look what I found: two amazing charts While doing some research for my statistics blog, I came across a beauty by Lane Kenworthy from almost a year ago (link) via this post by John Schmitt (link). How embarrassing is the cost effectiveness of U.S. health care spending? When a chart is executed well, no further words are necessary. I'd only add that the other countries depicted are "wealthy nations". Even more impressive is this next chart, which plots the evolution of cost effectiveness over time. Let's appreciate this beauty: Let the data speak for itself. plyr