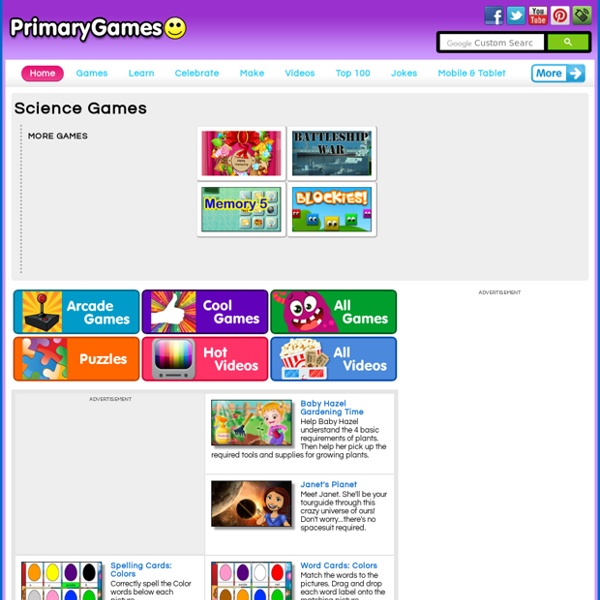 Help Baby Hazel understand the 4 basic requirements of plants. Then help her pick up the required tools and supplies for growing plants. Meet Janet. She'll be your tourguide through this crazy universe of ours! Don't worry...there's no spacesuit required. Correctly spell the Color words below each picture. Match the words to the pictures. Mosa Mack is a confident sleuth who will stop at nothing to get to the bottom of any science mystery. Connect all the electrons in a single line! Guide the beam to create a gorgeous spectrum of light. Your goal in the game is to spend as little money as possible while maintaining a balanced diet in the whole week. The monsters are ready for their dentist appointment! You must protect the ozone layer! Help Sonic Simon clean teeth with Philip's Sonicare! Do you know where the hygiene hotspots are in your home? You find yourself in sandy terrain while searching for traces of prehistoric life. Old MacDot had a farm. Related:  Science

Encyclopedia of Earth World History Lesson Plans, Games, Powerpoints, Classroom Activities K-12 PART ONE #3 aboriginal_climate The climate in Aboriginal Australia - Yarralin Yarralin (Walangeri) is an aboriginal community 382 km southwest of Katherine in the Northern Territory, 16 km west of the Victoria River Downs cattle station on the banks of the Wickham River. It is not far from the Victoria and Humbert Rivers, the Gregory national Park and Jasper Gorge. In the book, Windows on Meteorology, Australian Perspective, Deborah Rose reports some insights into the holistic and systemic nature of the understanding of the natural world held by the Aboriginal people during conversations at the site she studied, Yarralin on the Wickham River, 15 km upstream from the Victoria River Downs cattle station. For the Aboriginal people the meteorological systems are the result of the interactions of many parts of their natural environment, and they include humans in that interconnected system. Some time from October to December the build up to the wet season is characterised by humid heat. Tropical north Central Australia

Biology For Kids - KidsBiology.com Victorian Essential Learning Standards - VELS PART ONE #1 Science and Space Facts, Science and Space, Human Body, Health, Earth, Human Disease - National Geographic PART TWO #4 ScienceWeb - ASTA PART ONE #2 CREativity in Science and Technology - CREST — The Learner's Way Grant Wiggins writing for te@chthough deals with this problem in an article titled 'Experiential Learning: Just Because It’s Hands-On Doesn’t Mean It’s Minds-On’. Grant asks students three questions that reveal the level to which they are cognitively engaged with the task at hand; What are you doing? Why are you doing it? and What does this help you do that’s important? How many students if asked these questions would reply that they are following the steps indicated and that they need to follow the steps to complete the task? The next level is a little more challenging and is possibly the first step towards open ended scientific inquiry. A simple example of ‘guided discovery’ was shared with a group of scientists and teachers at a recent CSIRO ‘Scientists in Schools’ event. The next level is where it for most teachers it gets scary and for the students it gets most exciting; Open ended scientific exploration.