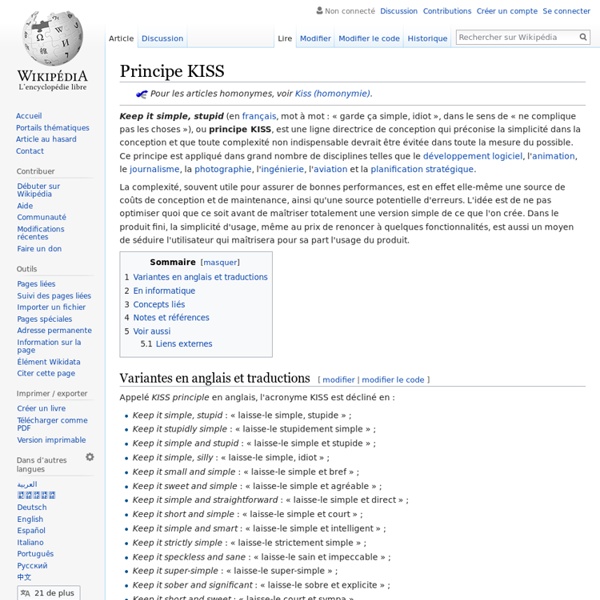 KISS principle Origin[edit] While popular usage has transcribed it for decades as "Keep it simple, stupid", Johnson transcribed it as "Keep it simple stupid" (no comma), and this reading is still used by many authors.[7] There was no implicit meaning that an engineer was stupid; just the opposite.[3] The principle is best exemplified by the story of Johnson handing a team of design engineers a handful of tools, with the challenge that the jet aircraft they were designing must be repairable by an average mechanic in the field under combat conditions with only these tools. The acronym has been used by many in the U.S. military, especially the U.S. Variants[edit] A variant — "Make everything as simple as possible, but not simpler" — is attributed to Albert Einstein, although this may be an editor's paraphrase of a lecture he gave.[8] In film animation[edit] In software development[edit] See also[edit] References[edit] External links[edit]

Occam's razor The sun, moon and other solar system planets can be described as revolving around the Earth. However that explanation's ideological and complex assumptions are completely unfounded compared to the modern consensus that all solar system planets revolve around the Sun. Ockham's razor (also written as Occam's razor and in Latin lex parsimoniae) is a principle of parsimony, economy, or succinctness used in problem-solving devised by William of Ockham (c. 1287 - 1347). It states that among competing hypotheses, the one with the fewest assumptions should be selected. Other, more complicated solutions may ultimately prove correct, but—in the absence of certainty—the fewer assumptions that are made, the better. Solomonoff's theory of inductive inference is a mathematically formalized Occam's Razor:[2][3][4][5][6][7] shorter computable theories have more weight when calculating the probability of the next observation, using all computable theories which perfectly describe previous observations.

Chartjunk An example of a chart containing gratuitous chartjunk. This chart uses a large area and a lot of "ink" (many symbols and lines) to show only five hard-to-read numbers, 1, 2, 4, 8, and 16. Chartjunk refers to all visual elements in charts and graphs that are not necessary to comprehend the information represented on the graph, or that distract the viewer from this information.[1][2][3] Markings and visual elements can be called chartjunk if they are not part of the minimum set of visuals necessary to communicate the information understandably. Another kind of chartjunk skews the depiction and makes it difficult to understand the real data being displayed. A map with chartjunk: the gradients inside each province. The term chartjunk was coined by Edward Tufte in his 1983 book The Visual Display of Quantitative Information.[1] Tufte wrote: The interior decoration of graphics generates a lot of ink that does not tell the viewer anything new. References[edit] See also[edit]

The Kiss Principle What does KISS stand for? The KISS is an abbreviation of Keep It Stupid Simple or Keep It Simple, Stupid What does that mean? This principle has been a key, and a huge success in my years of software engineering. Typically when a developer is faced with a problem, they break it down into smaller pieces that they think they understand and then try to implement the solution in code. How will I benefit from KISS You will be able to solve more problems, faster. How can I apply the KISS principle to my work There are several steps to take, very simple, but could be challenging for some. Be Humble, don't think of yourself as a super genius, this is your first mistake By being humble, you will eventually achieve super genius status =), and even if you don't, who cares! Are there any examples of the KISS principle There are many, and I will look for some really great one to post here. Some of the world's greatest algorithms are always the ones with the fewest lines of code.

Simplicity First published Fri Oct 29, 2004; substantive revision Thu Feb 25, 2010 Most philosophers believe that, other things being equal, simpler theories are better. But what exactly does theoretical simplicity amount to? Syntactic simplicity, or elegance, measures the number and conciseness of the theory's basic principles. 1. There is a widespread philosophical presumption that simplicity is a theoretical virtue. We may assume the superiority ceteris paribus of the demonstration which derives from fewer postulates or hypotheses.[1] Moving to the medieval period, Aquinas writes If a thing can be done adequately by means of one, it is superfluous to do it by means of several; for we observe that nature does not employ two instruments where one suffices (Aquinas 1945, p. 129). Rule I: We are to admit no more causes of natural things than such as are both true and sufficient to explain their appearances. Compare this to the following passage from Einstein, writing 150 years later. 2. 3.

Complexity Complexity is generally used to characterize something with many parts where those parts interact with each other in multiple ways. The study of these complex linkages is the main goal of complex systems theory. In science,[1] there are at this time a number of approaches to characterizing complexity, many of which are reflected in this article. Neil Johnson admits that "even among scientists, there is no unique definition of complexity - and the scientific notion has traditionally been conveyed using particular examples..." Ultimately he adopts the definition of 'complexity science' as "the study of the phenomena which emerge from a collection of interacting objects. Overview[edit] Definitions of complexity often depend on the concept of a "system"—a set of parts or elements that have relationships among them differentiated from relationships with other elements outside the relational regime. Disorganized complexity vs. organized complexity[edit] Sources and factors of complexity[edit]