Where the World Comes to Study the Bible 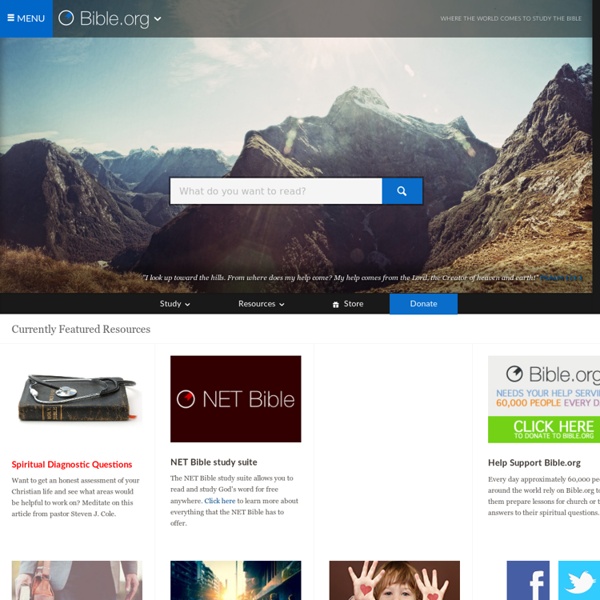 10 Easy Things That Will Make You Happier, Backed By Science Happiness is so interesting, because we all have different ideas about what it is and how to get it. So naturally we are obsessed with it.. I would love to be happier, as I’m sure most people would, so I thought it would be interesting to find some ways to become a happier person that are actually backed up by science. Faith after Literalism: An Interview with Michael Gungor Today's entry was written by the BioLogos Editorial Team and features Michael Gungor. Please note the views expressed here are those of the author, not necessarily of The BioLogos Foundation. You can read more about what we believe here. Editor’s Note: Michael Gungor and his wife Lisa are Grammy-nominated musicians and co-leaders of the musical collective Gungor, which has released three studio albums and a live album. On August 2, World magazine published an article entitled "Gungor Drifts From Biblical Orthodoxy.” They reference a 2013 interview and several of Michael’s old blog posts, and accuse the band of slipping outside the bounds of biblical faith, particularly on issues of creation and biblical authority.

New American Standard Bible The New American Standard Bible (NASB or NAS), completed in 1971, is widely regarded as one of the most literally translated of 20th-century English Bible translations. According to the NASB's preface, the translators had a "Fourfold Aim" in this work: These publications shall be true to the original Hebrew, Aramaic, and Greek. They shall be grammatically correct. They shall be understandable. They shall give the Lord Jesus Christ His proper place, the place which the Word gives Him; therefore, no work will ever be personalized.

End Times Prophecy There are many prophecies about the end times. A lot of people claim to know what will happen in the future. But God is the only one who actually knows the future. The only accurate prophecies describing end time events are found in the Bible. God gave us a detailed prophecy about the end times of our world. This prophecy is contained in the book of Revelation in the Bible. Free resources for explanation of Christian faith / FaithExplorer FaithExplorer summarizes Christian faith in plain language so people can understand quickly and share digitally in the modern world. The resources (right column) explain everything essential to know about Christian faith. These resources are available free in both written and video formats. They can be passed along via web links, email, social media and desktop printing. PDF FORMAT is the most versatile way of sharing and discussing Christian faith with others. In PDF format, FaithExplorer can be read on screen from computers, tablets and smart phones ... can be sent by email ... can be linked to websites and social media ... can be printed on desktop printers.

Strong's Exhaustive Bible Concordance Online The Strong's Exhaustive Concordance is the most complete, easy-to-use, and understandable concordance for studying the original languages of the Bible. Combining the text of the King James Bible with the power of the Greek and Hebrew Lexicons, any student or pastor can gain a clear understanding of the Word to enrich their study. Due to the helpful nature of the Strong's Exhaustive Concordance, we have incorporated this tool into our Online Study Bible search engine, enhancing it's usefulness. The X in Xmas literally means Christ. Here's the history behind it. You've probably heard the phrase "Keep Christ in Christmas," either on a church sign, or a Facebook wall. You might have even heard it this month. The idea is always the same: let's not rub out the religious roots of this holiday by saying "Xmas," instead of Christmas. This might seem like a strange battle to wage, but there are people who really, earnestly believe this is deeply important.