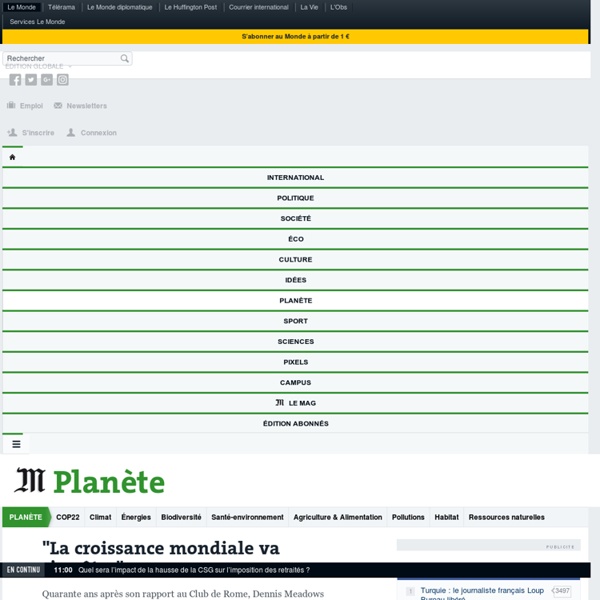 Desalination - Upgrading and retrofitting of municipal wastewater treatment plants by means of membrane bioreactor (MBR) technology Volume 231, Issues 1–3, 31 October 2008, Pages 20–26 Selected Papers Presented at the 4th International IWA Conference on Membranes for Water and Wastewater Treatment, 15-17 May 2007, Harrogate, UK. Guest Edited by Simon Judd; and Papers Presented at the International Workshop on Membranes and Solid-Liquid Separation Processes, 11 July 2007, INSA, Toulouse, France. Guest edited by Saravanamuthu Vigneswaran and Jaya Kandasamy A World without Landfills? It’s Closer than You Think by Jen Soriano Two recipients of this year’s Goldman Environmental Prize are working to abolish the practice of sending trash to landfills and incinerators. And the idea is catching on. posted Apr 17, 2013 Goldman Prize recipient Nohra Padilla at a recycling facility.

Study Suggests Population Control Is No Quick Fix For Environmental Problems The ever-burgeoning human population is an incredible strain on global resources and the environment. It’s been estimated that by the turn of the century, 11 billion people will inhabit our planet. More food, more water, more homes, more land, more medical resources are all going to be needed to accommodate this staggering number.

Noam Chomsky: U.S. Politics Are Now 'Pure Savagery' Author and activist Noam Chomsky said that the congressional controversy over extending unemployment benefits is evidence that American politics has descended into madness. "The refusal to provide very minimal living standards to people who are caught in this monstrosity -- that's just pure savagery," Chomsky said during an interview with HuffPost Live. "There's no other word for it." WATCH Chomsky's comments in the video above. Chomsky is a leading American intellectual known at first for his academic work in the field of linguistics. Invest But Reform: Smarter Finance for Cleaner Energy: Open Up Master Limited Partnerships and Real Estate Investment Trusts to Renewable Energy Investment By: Felix Mormann and Dan Reicher Master Limited Partnerships (MLPs) and Real Estate Investment Trusts (REITs)—both well-established investment structures—should be opened up to renewable energy investment. MLPs and, more recently, REITs have a proven track record for promoting oil, gas, and other traditional energy sources.

Portable Solar Desalination 'Plant' That May Aid In Third World Water Woes By Meera Dolasia on September 14, 2012 CCSSNAS-1NCSS-3Word Search 'Water, Water everywhere, not a drop to drink' - That, unfortunately, is the situation faced by millions of residents in developing countries who are surrounded by oceans, but have no access to fresh drinking water. Now thanks to this ingenious portable ceramic desalination 'plant' created by Milan-based designer Gabriele Diamanti, there may be a viable solution. 5 Lessons From The Companies Making Sustainability More Profitable Than Ever Good news for corporate social responsibility leaders: there’s a growing body of evidence that sustainability often goes hand in hand with profits. A new report from MIT Sloan Management Review and the Boston Consulting Group adds even more data to the pile: according to a survey of 2,600 executives and managers around the world, the number of companies that profited from sustainability initiatives climbed to 37%--up 23% from last year. MIT’s paper, The Innovation Bottom Line, is the latest in a series of reports dating back to 2010 that examine sustainability challenges in organizations. Here’s what we learned: Organizations need a business case for sustainability if they want their efforts to be successful. Among what the report calls Sustainability-Driven Innovators--companies that have changed their business models to incorporate sustainability and are making money from those changes--54% developed a business case,

12 Ways To Deal With A Climate Change Denier – The BBQ Guide The end of the year is nigh and it’s a time for Christmas and New Year parties and gatherings. In the southern hemisphere that means barbecues and beaches. In the northern hemisphere it’s mulled wine and cosy fireplaces. But for all of us, it probably means we’ll be subjected to at least one ranting, fact-free sermon by a Typical Climate Change Denier (TCCD). You know the drill. Make an offhand remark about unusual weather, and five seconds later someone’s mouthing off about how the internet says that climate change is a bunch of rubbish.