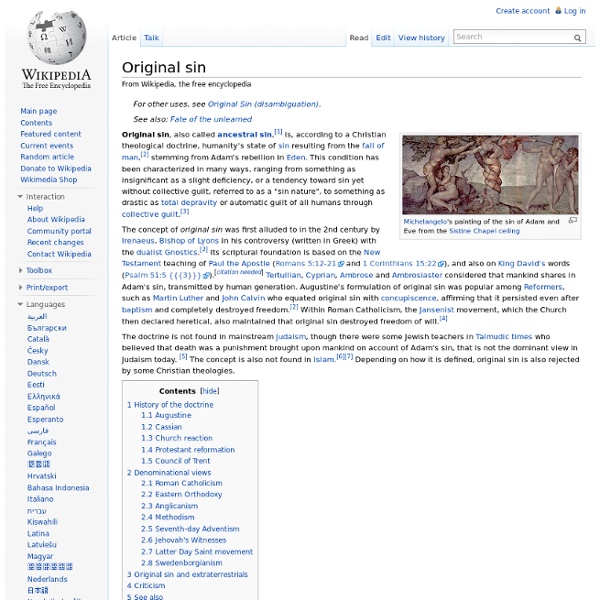 Ancestral sin Ancestral sin (Greek: προπατορικὴ ἁμαρτία or προπατορικὸν ἁμάρτημα, more rarely προγονικὴ ἁμαρτία) is the object of a Christian doctrine taught by the Eastern Orthodox Church. Some identify it as "inclination towards sin, a heritage from the sin of our progenitors".[1] But most distinguish it from this tendency that remains even in baptized persons, since ancestral sin "is removed through baptism".[2] St. Gregory Palamas taught that, as a result of ancestral sin (called "original sin" in the West), man's image was tarnished, disfigured, as a consequence of Adam's disobedience.[3] The Greek theologian John Karmiris writes that "the sin of the first man, together with all of its consequences and penalties, is transferred by means of natural heredity to the entire human race. Since every human being is a descendant of the first man, 'no one of us is free from the spot of sin, even if he should manage to live a completely sinless day.' ... Roman Catholic Church[edit] See also[edit]

Genesis creation narrative The Genesis creation narrative is the creation myth of both Judaism and Christianity. It is made up of two parts, roughly equivalent to the first two chapters of the Book of Genesis. In the first part, Genesis 1:1 through Genesis 2:3, Elohim, the generic Hebrew word for God, creates the world in six days, then rests on, blesses and sanctifies the seventh day. A common hypothesis among biblical scholars is that the first major comprehensive draft of the Pentateuch (the series of five books which begins with Genesis and ends with Deuteronomy) was composed in the late 7th or the 6th century BC (the Yahwist source) and that this was later expanded by other authors (the Priestly source) into a work very like the one we have today. Composition[edit] Sources[edit] As for the historical background which led to the creation of the narrative itself, a theory which has gained considerable interest, although still controversial, is "Persian imperial authorisation". Structure[edit] Background[edit]

Christian views on poverty and wealth Jesus casting out the money changers from the Temple by Giotto, 14th century There have been a variety of Christian views on poverty and wealth. John B. Cobb argues that the "economism that rules the West and through it much of the East" is directly opposed to traditional Christian doctrine. Cobb invokes the teaching of Jesus that "man cannot serve both God and Mammon (wealth)". He asserts that it is obvious that "Western society is organized in the service of wealth" and thus wealth has triumphed over God in the West.[1] Mahoney characterizes the saying of Jesus in Mark 10:23-27 as having "imprinted themselves so deeply on the Christian community through the centuries that those who are well off, or even comfortably off, often feel uneasy and troubled in conscience At one end of the spectrum is a view which casts wealth and materialism as an evil to be avoided and even combatted. Wealth and faith[edit] Wealth as an offense to faith[edit] Wealth as an obstacle to faith[edit] --Luke 1:51-53

Religions - Christianity: Original sin Salvation Salvation (Latin salvatio; Greek sōtēria; Hebrew yeshu'ah) is being saved or protected from harm[1] or being saved or delivered from some dire situation.[2] In religion, salvation is stated as the saving of the soul from sin and its consequences.[3] The academic study of salvation is called soteriology. Meaning[edit] Abrahamic religions[edit] Judaism[edit] In contemporary Judaism, redemption (Hebrew ge'ulah), refers to God redeeming the people of Israel from their various exiles.[6] This includes the final redemption from the present exile.[7] Judaism holds that adherents do not need personal salvation as Christians believe. The Jewish concept of Messiah visualises the return of the prophet Elijah as the harbinger of one who will redeem the world from war and suffering, leading mankind to universal brotherhood under the fatherhood of one God. When examining Jewish intellectual sources throughout history, there is clearly a spectrum of opinions regarding death versus the Afterlife.

Creationism When scientific research produces empirical evidence and theoretical conclusions which contradict a literalist creationist interpretation of scripture, young Earth creationists often reject the conclusions of the research[18] or its underlying scientific theories[19] or its methodology.[20] This tendency has led to political and theological controversy.[9] Two disciplines somewhat allied with creationism—creation science and intelligent design—have been labelled "pseudoscience" by scientists.[21] The most notable disputes concern the evolution of living organisms, the idea of common descent, the geological history of the Earth, the formation of the solar system and the origin of the universe.[22][23][24][25] Theistic evolution, also known as evolutionary creationism, reconciles theistic religious beliefs with scientific findings on the age of the Earth and the process of evolution. History[edit] Early and medieval times[edit] Impact of the Reformation[edit] Modern science[edit]

Concupiscence Concupiscence (from the Latin: con-, with + cupi, cupid - desire + -escere - suffix denoting beginning of a process or state) is an ardent, usually sensual, longing.[1] In Christian theology, concupiscence has the name "Fomes peccati", as the selfish human desire for an object, person, or experience.[2] For Christians, concupiscence is what they understand as the orientation, inclination or innate tendency of human beings to long for fleshly appetites, often associated with a desire to do things which are proscribed. There are nine occurrences of concupiscence in the Douay-Rheims Bible[3] and three occurrences in the King James Bible.[4] It is also one of the English translations of the Koine Greek epithumia (ἐπιθυμία),[5] which occurs 38 times in the New Testament.[6] Catholic and Protestant beliefs[edit] Catholicism, by contrast, teaches that humanity's original nature is good (CCC 374). This condition is referred to as original righteousness or Original Justice. Catholic teaching[edit]

Original Sin I. Meaning II. Principal Adversaries III. Original Sin in Scripture IV. Original Sin in Tradition V. Meaning Original sin may be taken to mean: (1) the sin that Adam committed; (2) a consequence of this first sin , the hereditary stain with which we are born on account of our origin or descent from Adam . From the earliest times the latter sense of the word was more common, as may be seen by St. Principal adversaries Theodorus of Mopsuestia opened this controversy by denying that the sin of Adam was the origin of death. After some time the Pelagians admitted the transmission of death — this being more easily understood as we see that parents transmit to their children hereditary diseases — but they still violently attacked the transmission of sin ( St. The leaders of the Reformation admitted the dogma of original sin, but at present there are many Protestants imbued with Socinian doctrines whose theory is a revival of Pelagianism . Original sin in Scripture Original sin in tradition St.

Michael Gilmour: Top 10 Zombie Scenes in the Bible Zombies loom large in popular culture these days. Max Brooks' "World War Z: An Oral History of the Zombie War" (2006), the Jane Austen, Seth Grahame-Smith mashup "Pride and Prejudice and Zombies" (2009), and Melissa Marr's "Graveminder" (2011), to name but a few recent novels, enjoy a wide readership. There are also graphic novels, the AMC television show "The Walking Dead," video games, and of course movies. Some of my recent favorites in the latter category include the Norwegian Nazis-as-zombies film "Dead Snow" (2009) with its delightful tagline "Ein! Zwei! Die!" I am an unabashed zombie fan but also teach "classic" English literature and the New Testament so I can't quite bring myself to desecrate the literary and religious masterpiece that is the Authorized (King James) Version by contributing to the Zombie Bible. 1. 2. 3. 4. 5. 6. 7. 8. 10.

What is the biblical evidence for original sin? There are several lines of biblical evidence for the historic Christian doctrine that we are all born into the world with sinful natures, due to the sin of Adam. Scripture says that we are born sinners and that we are by nature sinnersPsalm 51:5 states that we all come into the world as sinners: "Behold, I was brought forth in iniquity, and in sin my mother conceived me." Ephesians 2:2 says that all people who are not in Christ are "sons of disobedience." Ephesians 2:3 also establishes this, saying that we are all "by nature children of wrath." If we are all "by nature children of wrath," it can only be because we are all by nature sinners--for God does not direct His wrath towards those who are not guilty. Scripture speaks of humans as unrighteous from infancy There are also verses which declare that we are all unrighteous from the time that we are born. Jeremiah 17:9 says that "the heart is more deceitful than all else and is desperately sick; who can understand it." Further Resources