REVEALED: Hundreds of words to avoid using online if you don't want the government spying on you 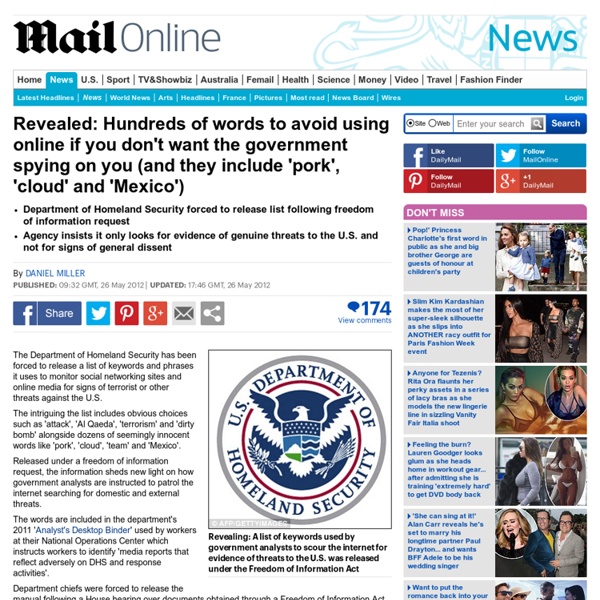 Department of Homeland Security forced to release list following freedom of information requestAgency insists it only looks for evidence of genuine threats to the U.S. and not for signs of general dissent By Daniel Miller Published: 09:32 GMT, 26 May 2012 | Updated: 17:46 GMT, 26 May 2012 Revealing: A list of keywords used by government analysts to scour the internet for evidence of threats to the U.S. was released under the Freedom of Information Act The Department of Homeland Security has been forced to release a list of keywords and phrases it uses to monitor social networking sites and online media for signs of terrorist or other threats against the U.S. The intriguing the list includes obvious choices such as 'attack', 'Al Qaeda', 'terrorism' and 'dirty bomb' alongside dozens of seemingly innocent words like 'pork', 'cloud', 'team' and 'Mexico'. Scroll down for full list However the agency admitted that the language used was vague and in need of updating. Related:  INSECURITY on the Web!

Bank of the Underworld By evening, a group of “carders”—cybercriminals who specialize in selling stolen credit-card numbers—had gathered online at a secure forum known as carder.pro to discuss the situation. According to Damon McCoy, a George Mason University professor who studies cybercrime, such forums are not open to the public; you must apply to join the discussion. “They vet you to make sure you are a good criminal,” he told me. Despite not being able to access their accounts, some of the carders remained hopeful. p3rito: I don’t know if LR will back or no I don’t know if owner was arrested or no. Zeus197: I think no real arrested and LR will come back. PlraX: Maybe this circus was created by fucker LR onwer to run away whit all our money and start anohter project. ochov: I agree. he runaway with the money. Roger: Why would he need to create any drama, if he wanted to run away, he could just run, and there would be nothing you could do about it. And the system that Budovsky built had inspired confidence.

Google wants to make sure you know that it scans you emails Good news! Google is stil scanning your emails, but at least now they're asking permission. As of Monday, Google has updated its terms of service to explicitly inform Gmail users that it is in the habit of scanning their personal emails for the purposes of providing target advertisements, custom search results, and other features. The revised terms of service now state, "Our automated systems analyze your content (including emails) to provide you personally relevant product features, such as customized search results, tailored advertising, and spam and malware detection. This analysis occurs as the content is sent, received, and when it is stored.” The revised user agreement is most likely a result of an ongoing case, in which Gmail users have accused the tech giant of infringing on their privacy. The consolidated multidistrict case, brought before the Norther California U.S. This week's update is the first to Google's terms of service since last November.

Cable Reveals Extent Of Lapdoggery From Swedish Govt On Copyright Monopoly Among the treasure troves of recently released WikiLeaks cables, we find one whose significance has bypassed Swedish media. In short: every law proposal, every ordinance, and every governmental report hostile to the net, youth, and civil liberties here in Sweden in recent years have been commissioned by the US government and industry interests. I can understand that the significance has been missed, because it takes a whole lot of knowledge in this domain to recognize the topics discussed. But all of a sudden, there it was, in black on white. This will become sort of a longish article, as I intend to outline all the hard evidence in detail, but for those who want the executive summary, it is this: The Pirate Party was right on every detail. At the middle of this, we find the US cable Stockholm 09-141, recommending Sweden to not be blacklisted by the US on the so-called Special 301 list, and outlines why. This sounds like fiction, right? All this seems eerily familiar. 1. 2. 3. [...] 1.

How the NSA Plans to Infect 'Millions' of Computers with Malware One presentation outlines how the NSA performs “industrial-scale exploitation” of computer networks across the world. Top-secret documents reveal that the National Security Agency is dramatically expanding its ability to covertly hack into computers on a mass scale by using automated systems that reduce the level of human oversight in the process. The classified files – provided previously by NSA whistleblower Edward Snowden – contain new details about groundbreaking surveillance technology the agency has developed to infect potentially millions of computers worldwide with malware “implants.” The clandestine initiative enables the NSA to break into targeted computers and to siphon out data from foreign Internet and phone networks. The covert infrastructure that supports the hacking efforts operates from the agency’s headquarters in Fort Meade, Maryland, and from eavesdropping bases in the United Kingdom and Japan. “That would definitely not be proportionate,” Hypponen says.

Algorithms and Future Crimes: Welcome to the Racial Profiling of the Future Photo Credit: Shutterstock.com/Viappy February 28, 2014 | Like this article? Join our email list: Stay up to date with the latest headlines via email. Across the country, large police departments have been developing their ability to track where crime will happen next using predictive software. Proponents describe the program in techno-pragmatist terms, arguing that it uses data to make smart inferences about the future in much the same way meterologists do. There is one major feature of predictive policing that the libertarian critique often glosses over: it's unmistakably racist. Any attempt to predict future criminality will be based on the crime rates of the past. The Verge took these questions to Chicago to examine the most developed and well-financed iteration of predictive policing in the country. Keeping with the dry data-babbling sell, the predictive analyst behind Chicago's program, Dr.

NSA files decoded: Edward Snowden's surveillance revelations explained | World news Two factors opened the way for the rapid expansion of surveillance over the past decade: the fear of terrorism created by the 9/11 attacks and the digital revolution that led to an explosion in cell phone and internet use. But along with these technologies came an extension in the NSA’s reach few in the early 1990s could have imagined. Details that in the past might have remained private were suddenly there for the taking. Chris Soghoian Principal technologist, ACLU NSA is helped by the fact that much of the world’s communications traffic passes through the US or its close ally the UK – what the agencies refer to as “home-field advantage”. The Snowden documents show that the NSA runs these surveillance programs through “partnerships” with major US telecom and internet companies. The division inside the NSA that deals with collection programs that focus on private companies is Special Source Operations, described by Snowden as the “crown jewels” of the NSA. Jeremy Scahill Fiber-optic cable

Related:
Related:  INSECURITY on the Web!