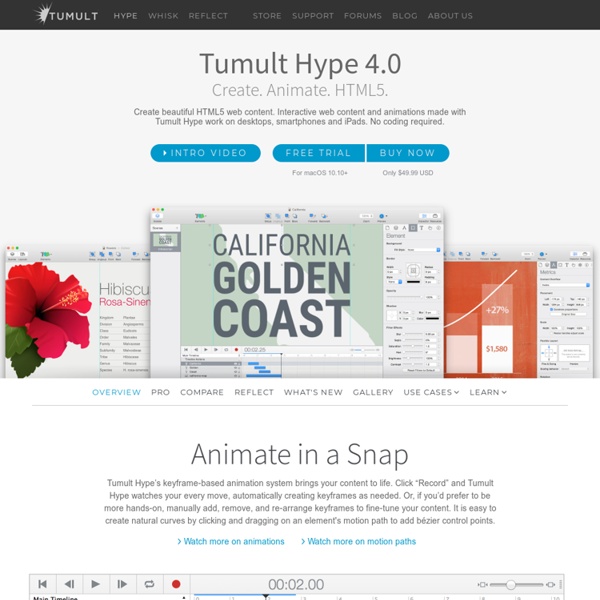 Tumult Hype tries hard to deliver 100% fidelity across all browsers. Yes, that even includes IE 6! When there are no good fallbacks, Tumult Hype warns about browser incompatibilities in the inspector and at export time, so you’re never caught by surprise. Tumult Hype outputs state of the art HTML5, CSS3 styles, and JavaScript. Built-in support for HTML5 audio and video allows for creating multimedia experiences. Tumult Hype strives to always adopt cutting edge features, like blurring, hue shifts, box shadows, reflection, and 3D transformations.

Safari HTML5 Canvas Guide: Modifying the Canvas with CSS Because the canvas is an HTML element, you can use CSS styles to modify its position, assign it a background color or image, add a border, and so on. In Safari and other WebKit-based browsers, you can use WebKit transitions to smoothly animate changes in CSS properties. Because the canvas can have a transparent background, you can use CSS to create animated graphics that roam freely across the webpage. Assigning a Border and Background The example in Listing 12-1 uses CSS to assign a background image and a border to the canvas element, as illustrated in Figure 12-1. A CSS background does not appear in the canvas bitmap, so it does not interfere with image processing.

Full Page Overlay Window : Web Design Tutorial Full Page Pop-up Window Overlay In this tutorial you will learn how to create a full page pop-up window that overlays an existing html page. This technique is used often for displaying a video, movie file, picture, or form when a user clicks on an element in a web page.

HTML5 video The HTML5 specification introduced the video element for the purpose of playing videos,[1] partially replacing the object element. HTML5 video is intended by its creators to become the new standard way to show video on the web, instead of the previous de facto standard of using the proprietary Adobe Flash plugin, though early adoption was hampered by lack of agreement as to which video coding formats and audio coding formats should be supported in web browsers. History of <video> element[edit] The <video> element started being discussed by the WHATWG in October 2006.[2] The <video> element was proposed by Opera Software in February 2007.[3] Opera also released a preview build that was showcased the same day,[4][5] and a manifesto that called for video to become a first-class citizen of the web.[6] <video> element examples[edit]

PhoneGap Beginner's Guide eBook: $26.99 Formats: $22.94 save 15%! Print + free eBook + free PacktLib access to the book: $71.98 Print cover: $44.99 $44.99 save 37%! Free Shipping! UK, US, Europe and selected countries in Asia. Creating HTML5-Ready Video > Presenting HTML5 Video with Dreamweaver CS5 Next, you need to prepare the video that you'll embed using the HTML5 Pack. Two video formats are supported by HTML5: H.264 and Ogg Theora. Both are compression formats; that is, they take uncompressed video files (from formats such as QuickTime's MOV or Microsoft's WMV) and reduce their size by using technology that eliminates unnecessary digital video data. Testing Anywhere - Automated Testing Software for automating web testing, software testing & more. Whether you’ve automated tests at your organization before or are ready to dive in now, there’s a way to do it faster, smarter, and more reliably. With Testing Anywhere, you get a powerful, “no-programming-required” user interface that lets you record, edit, and run test cases—no matter how complex—in record time, enabling your team to focus on more thorough testing. Try itFree Why Testing Anywhere?

Using Adobe Media Encoder to create iPad video – short form video on May 28 in Software, Tips and Tricks by laurence Having just bought my own iPad, I can say that video really does look good played back on this larger screen. However, despite the fact that Apple (and everyone else, for that matter) seems to be focusing on its ability to play back high-definition video, it seems as though we’ve overlooked the fact that it’s a 4:3 screen. Screen Scraping, Web Scraping Software. Screen Scrape with Automation Anywhere: the leader in intelligent web scraping technology. Most businesses rely on the web or internal applications to gather data that is crucial to their decision making processes. Automating information gathering whether they are from websites or applications can significantly help businesses reduce costs, time and manual errors. Automation Anywhere can help you easily automate screen scraping without any programming. Going beyond simple cutting and pasting information, Automation Anywhere intelligently scrapes information from a website or applications. Running on SMART Automation Technology®, it can automatically login to websites or applications, account for changes in the source website or applications, copy that information and transfer it to another application reliably in a format specified by you.

Adobe Labs release Wallaby Flash to HTML5 converter : Suburbia Adobe have released an interesting experimental tool called 'Wallaby' over on Adobe Labs. It's basically an app that tries to convert Flash FLA source files into 'HTML5' compatible animations. Note I'm using 'HTML5' in quotes as usage of the term here is more in the overall grouping of HTML5 and related technologies such as CSS3, JavaScript / jQuery, SVG etc. It's worth reading over the Release Notes to get an idea of the current limitations, the biggest issues at the moment being WebKit browser support only and no conversion of actionscript or sound within FLAs.

Version control without the command line   The command line is a powerful way to use version control systems, but not everyone is as comfortable with memorizing and using text commands. Thankfully, there are many good GUI clients available for popular version control and operating systems. We’ve compiled a list of our favorites below, which all work well with Beanstalk. Subversion Clients Subversion is a popular choice for people who are new to version control because of it’s robust ecosystem of clients.