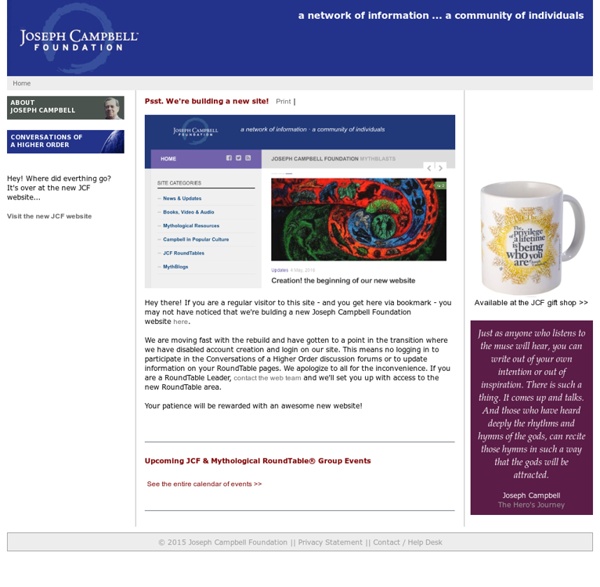 Psst. We're building a new site!Print | Hey there! We are moving fast with the rebuild and have gotten to a point in the transition where we have disabled account creation and login on our site. Your patience will be rewarded with an awesome new website! Upcoming JCF & Mythological RoundTable® Group Events See the entire calendar of events >>

breathe. | zen habits Roger Waters :: The Wall Live :: Official Site Astronomy Picture of the Day COSMOS Supercomputer - Home COSMOS IX arrives! On the 4th of July 2012 the brand new Altix UV2000 system from SGI arrived at DAMTP. The system, which is the largest shared-memory computer in Europe and the first SMP system in the world to be boosted by the Intel Xeon Phi co-processors later in the year, will be used to support research in cosmology, astrophysics and particle physics within the DiRAC distributed HPC Facility, funded by STFC and DBIS UK. COSMOS Mk IX features 1856 Intel Xeon E5 processor cores (SandyBridge-EP) with 14.5TB of globally shared memory. It will also eventually feature 31 Intel Many Integrated Core (MIC) co-processors, providing a hybrid hierarchical SMP/MIC computing platform. See more pictures here...

Golkonda Golkonda, also known as Golconda or Golla konda ("shepherd's hill"), a ruined fort of Southern India and capital of medieval Golconda Sultanate (c.1518–1687), is situated 11 km west of Hyderabad. It is also a mandal of Hyderabad District. The region is universally famous for the mines that have produced the world's most famous and coveted gems, including The Hope Diamond, Idol's Eye, The Koh-i-Noor and Darya-i-Noor. Administrative divisions[edit] There are nine villages in Golkonda Mandal: Dargah Hussain ShahwaliGolkondaHyder Shah KoteIbrahim Bagh LinesKakatiya NagarLunger HouseNanakramgudaSakkubai NagarToli Chowki History[edit] Ruins of the Fort Tourists at the Fort The Golkonda fort was first built by Kakatiyas as part of their western defenses. The city and fortress are built on a granite hill that is 120 meters (400 ft) high and is surrounded by massive crenelated ramparts. The Qutb Shahi sultanate lasted until its conquest by Mughal emperor Aurangzeb in 1687. Diamonds[edit] The Fort[edit]

frontline: the persuaders: neuromarketing But 30 years after the commercials debuted, neuroscientist Read Montague was still thinking about them. Something didn't make sense. If people preferred the taste of Pepsi, the drink should have dominated the market. It didn't. So in the summer of 2003, Montague gave himself a 'Pepsi Challenge' of a different sort: to figure out why people would buy a product they didn't particularly like. What he found was the first data from an entirely new field: neuromarketing, the study of the brain's responses to ads, brands, and the rest of the messages littering the cultural landscape. Neuromarketing, in one form or another, is now one of the hottest new tools of its trade. Getting an update on research is one thing; for decades, marketers have relied on behavioral studies for guidance. That last piece of research is particularly worrisome to anti-marketing activists, some of whom are already mobilizing against the nascent field of neuromarketing.