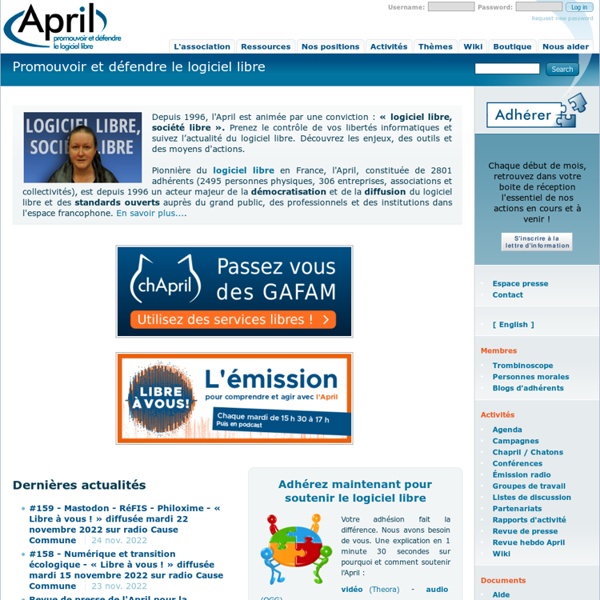 VirtualBox Note: The package architecture has to match the Linux kernel architecture, that is, if you are running a 64-bit kernel, install the appropriate AMD64 package (it does not matter if you have an Intel or an AMD CPU). Mixed installations (e.g. Debian/Lenny ships an AMD64 kernel with 32-bit packages) are not supported. Telecomix Telecomix is a sociocyphernetic telecommunist feminist cluster of internet and data loving bots and people, always striving to protect and improve the internet and defend the free flow of data. Telecomix, just like the Internet, knows no borders technological or territorial. We have no specific agenda, IRCocratic leadership and no pre-determined practices. We are an occurance rather than a group; a siphonophoric organism transmitting its genome through memes and imitation rather than through rules and regulations.

MindMapping: Mind Maps, PDF Management and Reference Management Combined Are you using mind mapping tools such as MindManager, FreeMind or XMind? And reference management tools such as JabRef, Endnote, or Zotero? And do you sometimes even create bookmark in PDFs? Then you should have a look at SciPlore MindMapping. SciPlore MindMapping is the first mind mapping tool focusing on researchers’ needs by integrating mind mapping with reference and pdf management. SciPlore MindMapping offers all the features one would expect from a standard mind mapping software, plus the following special features for researchers: Free Software Foundation Europe Open Letter to EU institutions: Time to support Open Standards 26 March 2014: In an open letter to the European Parliament and the European Commission, Free Software Foundation Europe and Open Forum Europe are asking the European institutions to improve their support for Open Standards.

Christian mythology Christian mythology is the body of myths associated with Christianity. Within contemporary Christianity, the appropriateness of describing Christian narratives as “myth” is a matter of disagreement. George Every claims that the existence of "myths in the Bible would now be admitted by nearly everyone", including "probably all Roman Catholics and a majority of Protestants".[1] As examples of biblical myths, Every cites the creation account in Genesis 1 and 2 and the story of Eve's temptation.[1] A number of modern Christian writers, such as C.S. BSD licenses BSD licenses are a family of permissive free software licenses, imposing minimal restrictions on the redistribution of covered software. This is in contrast to copyleft licenses, which have reciprocity share-alike requirements. The original BSD license was used for its namesake, the Berkeley Software Distribution (BSD), a Unix-like operating system. The original version has since been revised and its descendants are more properly termed modified BSD licenses. Terms[edit] Besides the original license used in BSD, there are several derivative licenses that are commonly referred to as a "BSD license".

Why Linux is better PDFBEAR is founded by the team behind WhyLinuxIsBetter.net, which brings tons of experience in user conversion tools. We have decided to change our focus to helping and improving how our users convert files on all platforms including Linux. About WhyLinuxIsBetter.net The webpage was created in order to help people understand the ins-and-outs of Linux. In addition to this, it was emphasized that Linux is a free service, but it also protects the end-user from malware. Similar to PDFBEAR, we have created a malware-free service.